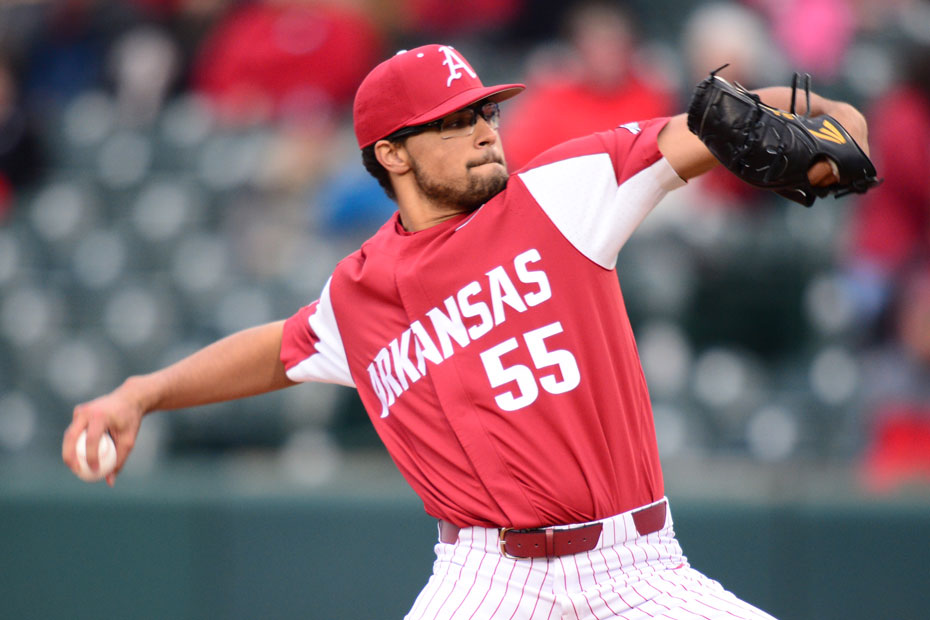 SAN DIEGO, Calif. – After coming out on the winning side of a 1-0 pitchers’ duel against Arizona Wednesday night, the third-ranked Arkansas baseball team remains undefeated at 4-0 as it goes into the weekend’s Tony Gwynn Legacy Tournament and will face the likes of Cal Poly, San Diego State, and San Diego over the next three days.

Follow Live
All games will be televised regionally on Cox Sports Television with Brett Dolan (PXP) and Troy Eklund (Analyst) calling the action. Scott Inman (PXP) will have the radio call on the IMG Sports Network. COX SPORTS CHANNEL FINDER

Murphy And Kjerstad Will Hogs Past Wildcats – Playing a neutral site game as part of a warmup to the Tony Gwynn Legacy Tournament, Arkansas was able to gut out a 1-0 victory over PAC-12 power Arizona Wednesday night. Junior pitcher Kacey Murphy showed no drop off from his strong 2017 postseason by throwing six scoreless innings and totaling six strikeouts on 73 pitches. At the plate, freshman Heston Kjerstad continues to show he belongs by hitting the solo home run that provided the victory. Kjerstad has at least one hit in all four games this year and only one strikeout in 12 at-bats.

DVH Closing In On 600 Wins At Arkansas – With Wednesday’s win over Arizona, Arkansas head coach Dave Van Horn is now just one win away from 600 as the head Hog. Van Horn entered 2018 with the third-most wins by a current head coach in the SEC at their current school. With another win, Van Horn will join Vanderbilt’s Tim Corbin and Ole Miss’ Mike Bianco as the only coaches in the conference with 600 or more wins at their current institution. Overall, Van Horn has 970 wins as a Division I head coach, good for eighth-most among all active coaches.

Knight Makes Third-Straight Opening Weekend Start – For the third-straight season, Bryant, Arkansas native Blaine Knight was part of Arkansas’ starting rotation for the first series of the year. Knight held Bucknell hitless over five innings in a 14-2 victory. Combined in his three opening weekend starts, Knight has struck out 12 batters in 14 innings, while allowing just two runs and walking two batters. After last week’s slate of games, Knight was the only starting pitcher in the SEC to not give up a single hit during their outing.

Hogs Plate 49 Runs On Bucknell – Arkansas cruised to a sweep over Bucknell on opening weekend. While the the three wins were impressive enough, it was the amount of runs that was astounding. 49 Razorback runs crossed the plate combined over the three games including 32 in Saturday’s game two. The 49 runs is the most in the first three games of of a season since 1997. The sweep is the team’s fifth-straight dating back to 2014, while the 32 runs on Saturday was just one less than the school record for runs scored in a single-game (1984).

Soooieville Sluggers Year Two? – In 2017, Arkansas crushed an SEC-best 83 home runs. It was the most home runs by a Razorback team since 2010. The Hogs picked up where they left off during opening weekend last week, hitting eight homers, including six in Saturday’s 32-4 victory over Bucknell. Arkansas currently leads all SEC teams in home runs and is tops in the nation after week one.

Welcome Back Guys! – Multiple Razorbacks who were injured for most of 2017 made their returns last week including: pitchers Isaiah Campbell (bone spurs), Keaton McKinney (elbow), Cody Scroggins (elbow), and infielder Hunter Wilson (leg). Campbell and McKinney were both part of the starting rotation, combining for six innings and nine strikeouts. Campbell was able to earn the game two win, while McKinney was making his first competitive appearance since the 2016 season.