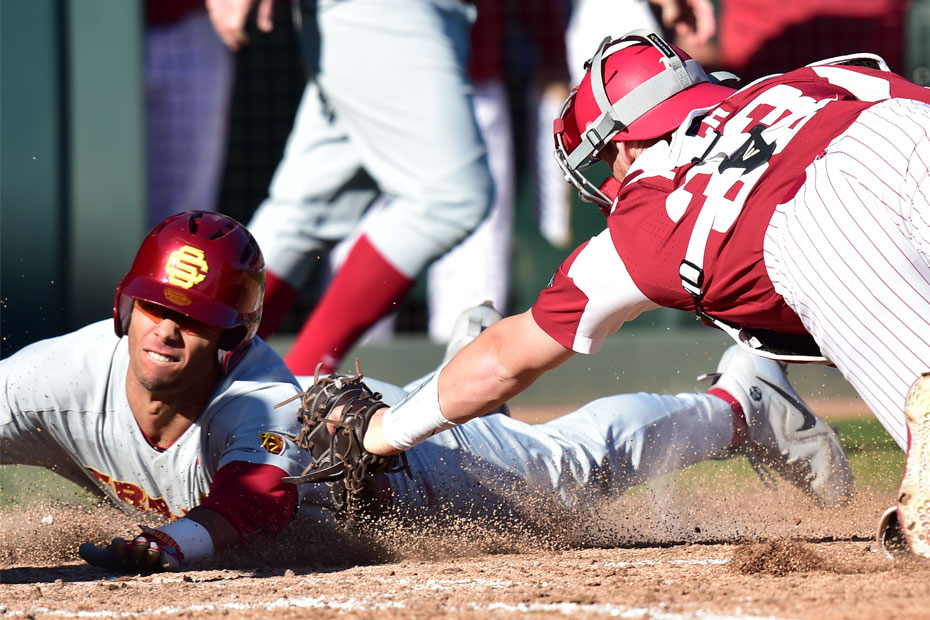 Trojans Even Series With Razorbacks

FAYETTEVILLE, Ark. – The fifth-ranked Razorback baseball team couldn’t put together the big inning against USC on Saturday, leaving nine runners on base as it fell, 3-1, at Baum Stadium. The two teams return to Baum Stadium tomorrow for the series finale with first pitch scheduled for 12:30 p.m.

13,472 Razorback fans made it out to the game on Saturday, making it the largest paid attendance in Baum Stadium history, topping the previous record of 12,589 set against Mississippi State on April 25, 2015.

Junior Eric Cole got the Hogs within one in the eighth inning when he hit his third home run of the year into the Razorback bullpen, but Arkansas was only able to put one more runner on base in the eighth and ninth innings. Cole finished the game 1-for-4 with his one RBI as the home run.

Junior catcher Grant Koch nearly made it a two-home run inning in the eighth as he hooked one just foul in left field that would have made it 3-2. Koch finished the game 1-for-4, extending his hitting streak to four games.

USC scored once in the sixth and seventh innings, then added a run in the ninth off sophomore Matt Cronin, who walked two batters to lead off the frame. Cole’s homer was the only bright spot for the Hogs as USC starter Quentin Longrie worked out of multiple jams to keep the Hog hitters at bay.

Arkansas put together nine hits in the game, eight off Longrie, however, it left multiple runners on base in the first, fourth, and eighth innings which proved to be the difference. Longie ended up going 7.1 innings with just the one earned run allowed, as well as three walks and four strikeouts to pick up his second win of the year.

Luke Bonfield came away with a perfect 3-for-3 game with one double, while Jax Biggers turned in his fourth multi-hit game of the year, going 2-for-5. All three of Bonfield’s hits came at a timely part in the game in the third, fifth, and seventh innings that helped put runners in scoring position or gave Arkansas a baserunner with less than two outs. However, the bottom of the Hogs’ order went just 2-for-17 (.118) on the day as it struggled to get anything going against the USC pitching staff.

On the mound, Razorback starter Isaiah Campbell looked good through 5.1 innings, giving up just three hits with one run in the sixth. That run was the first of the game for either team as the score was deadlocked at zero in what was beginning to look like a pitcher’s duel.

Campbell’s outing continued a trend of strong starting pitching by the Razorbacks. In all three of his starts this year, Campbell has yet to give up more than one earned run and has given up five or less hits.

Sophomore Matt Cronin came out of the bullpen in the sixth and had a little trouble with command as he walked two, gave up two hits and two earned runs in 2.2 innings.

Up Next
The Razorbacks finish the series with USC on Sunday with first pitch scheduled for 12:30 p.m. at Baum Stadium. The game will be televised on SEC Network+.