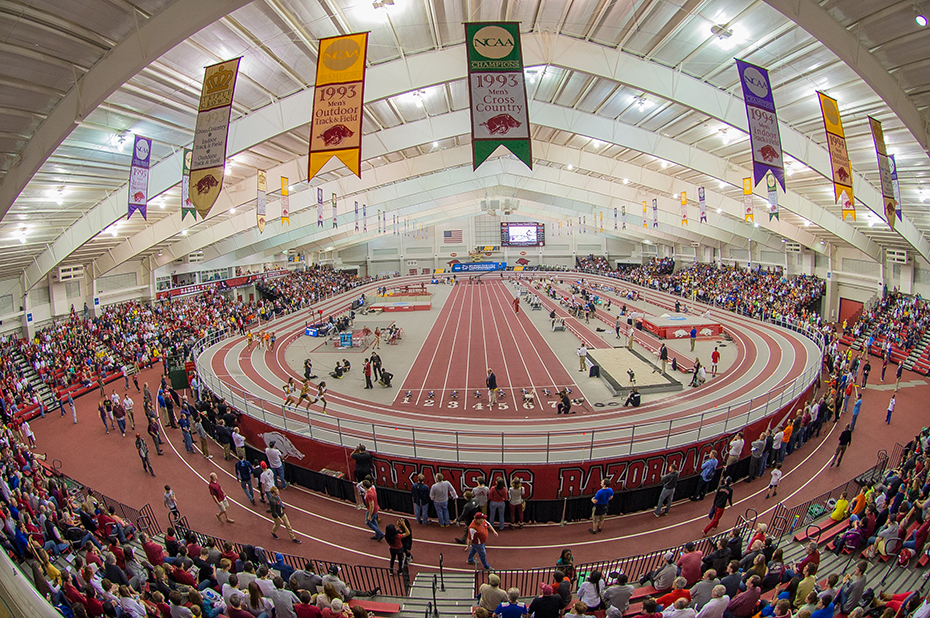 “Since legendary Razorback Track & Field Coach John McDonnell first approached my dad to support the initial construction of the track center, that opened on campus in January 2000, our family has been committed to supporting the championship track and field programs at the University of Arkansas,” said John H. Tyson, chairman of Tyson Foods, Inc. “Investing in the renovation and expansion of the Randal Tyson Track Center will ensure it remains one of the world’s top track and field venues while also helping the Razorbacks to recruit and retain the most talented track and field student-athletes from around the globe.”

Widely considered the fastest indoor surface ever constructed, the Tyson track has been home to numerous world records, American records and a large percentage of all current NCAA Championship meet records. In a re-dedication ceremony held Feb. 12, 2011, during the 2011 Tyson Invitational in Fayetteville, the Randal Tyson Track Center was recognized as “The Home of the Fastest Indoor Track in the World.”

“For nearly two decades, the Randal Tyson Track Center has been home to outstanding collegiate and professional competition. To have a world-class facility named in honor of my late husband Randal, is a fitting tribute to his tremendous contributions as a business leader and a community philanthropist. With the renovation and expansion of the Randal Tyson Track Center, we will help ensure the continued prominence of this spectacular venue as well as further the legacy of its namesake,” said Barbara Tyson.

A feasibility study determined that both the fan and student-athlete experiences would benefit from reconfigured seating, enhanced circulation throughout the building, new concessions and restrooms, satellite locker rooms and training rooms facilities. The project will be completed in stages to allow the venue to still be used for competition during construction. The targeted completion date for the renovation and expansion is prior to the 2021 NCAA Indoor Track and Field Championships, which will be held at the venue.

“The University of Arkansas has enjoyed a rich history of track and field success, including 43 team national championships, 147 team conference titles and more than 1,200 All-Americans,” said Hunter Yurachek, vice chancellor and director of athletics. “In addition, we have become a prime destination for some of the most prestigious track events in the nation. To maintain that championship tradition, we must continue to invest in our facilities so that we are recruiting the most talented student-athletes year-after-year. We are grateful to the Tyson family for their long-time support of our program and their extraordinary leadership throughout Arkansas and around the world.”

“The Randal Tyson Track Center first opened on the University of Arkansas campus in 2000 and has hosted 12 NCAA Championships and eight Southeastern Conference Championships. By moving forward with the renovation and expansion of the Randal Tyson Track Center, we are positioning future Razorback generations for success on the track,” said Scott Varady, executive director of the Razorback Foundation.

The total project cost of the Randal Tyson Track Center Renovation and Expansion is currently estimated at $15-20 million. Fans interested in supporting the project are encouraged to contact the Razorback Foundation at (479) 443-9000 or gohogs@razorbackfoundation.com.

A Division I member of the National Collegiate Athletic Association (NCAA), the University of Arkansas’ Department of Intercollegiate Athletics annually ranks as one of the nation’s most successful athletics programs. The University of Arkansas sponsors a total of 19 varsity sport programs, including 8 men’s and 11 women’s sports. Featuring one of the most unique nicknames in intercollegiate athletics and a passionate fan following, the Arkansas Razorbacks compete in the Southeastern Conference (SEC). Razorback Athletics annually meets the needs of more than 465 student-athletes enabling them to succeed in athletic competition, in the classroom and in the community.

About the Razorback Foundation

The mission of The Razorback Foundation, Inc., is to support the athletic endeavors of the University of Arkansas Razorbacks. The Foundation assists Razorback student-athletes by providing financial support for scholarships, facilities and various programs that enable them to realize their dreams of achieving a quality college education while participating in athletics on a nationally competitive level. Razorback Athletics is one of a handful of NCAA Division I Athletic Departments in the nation that is financially self-sustaining and requires no UA student fees revenue or taxpayer support.