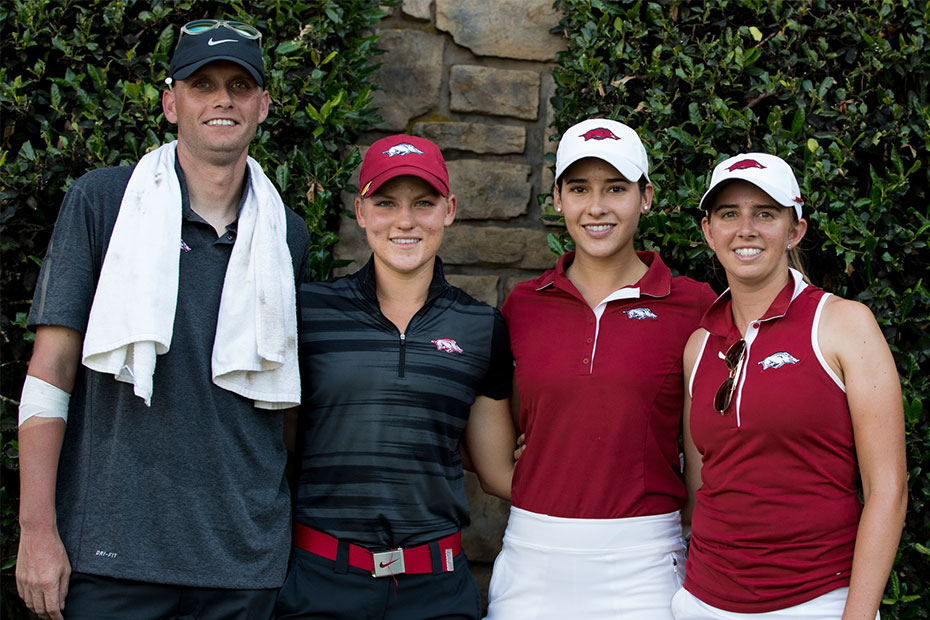 ROGERS, Ark. – University of Arkansas sophomore Alana Uriell and senior Regina Plasencia were both under par and advanced out of the Monday qualifier at the Walmart NW Arkansas Championship presented by P&G. The pair join Razorback freshman Maria Fassi and #ProHogs Stacy Lewis and Gabriela Lopez in the tournament field Friday toSunday at Pinnacle Country Club.

The duo outplayed 16 LPGA Tour professionals securing the largest Razorback field in the 10-year history of the event. Uriell blistered the field shooting a 7-under 64 while Plasencia was 2-under with 69.

Both players were steady to start with birdie chances on both holes one and two. Uriell ran into some trouble on the third hole finding the water on a short tee shot. She would bogey the hole.

After that setback, Uriell settled in carding back-to-back birdies on the fifth and sixth holes on the front nine. On No. 5, she found herself in the bunker behind the green and chipped up, finding the bottom of the cup. She moved on to No. 6 where she was short and right of the green but again managed to chip in for the birdie moving to 1-under.

Uriell went on to birdie Nos. 8 and 9 turning 3-under through the first nine holes. The Carlsbad, California, native missed a birdie putt on No. 10 by four inches but got it on the next hole hitting her tee shot to four feet on the par-3 190-yard elevated green.

She reeled off four consecutive par holes before a birdie on the 16th hole after a long putt. A solid par on No. 17 was followed by an amazing second shot on the final hole. The long par-5 saw Uriell’s second shot, a 3-wood from the fairway, just slide past for what would have been an eagle. She would go on to sink the birdie putt to finish 7-under for the round.

Plasencia, who graduated with a degree in international business in May, had a great shot on No. 15 for birdie. She had a great tee shot to three feet and sank the putt moving to two-under. She finished with three consecutive pars to advance to Friday’s play.

Tee times for all of the players will be announced later this week.

NOTES
• This was Regina Plasencia’s second appearance in the qualifier and her first time making the cut
• Today was Alana Uriell’’s first appearance in the Monday qualifier
• The pair are the third and fourth Razorbacks to advance out of the Monday qualifier
o Kelli Shean, 2009
o Samantha Marks, 2015
• Stacy Lewis is playing in the event for the 10th year
• Gabriela Lopez earned her LPGA Tour Card in December and returns to Northwest Arkansas as a professional
• Alana Uriell and Regina Plasencia were the only amateurs in the Monday field and the only players to advance