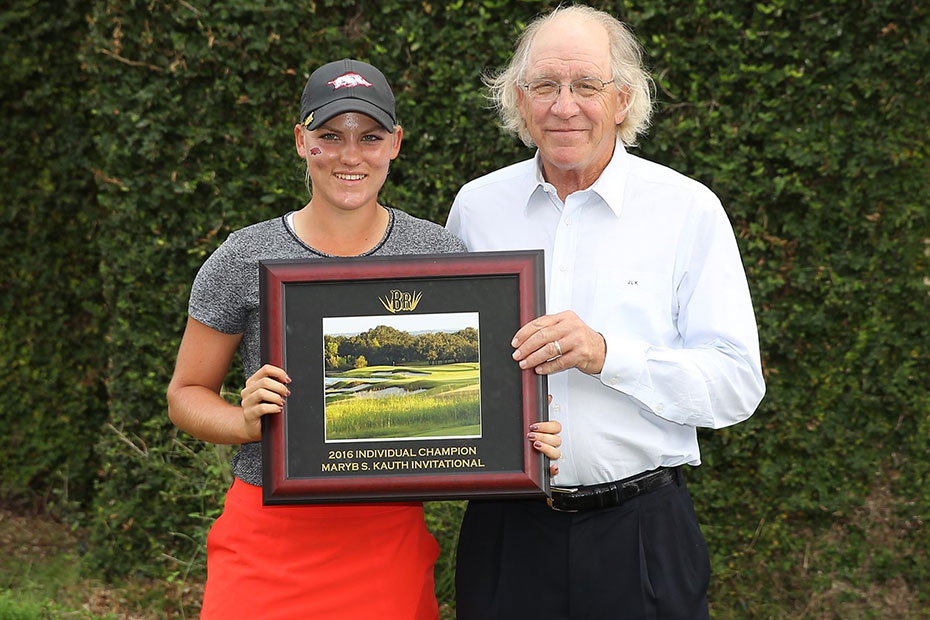 Uriell carded rounds of 65–68–71—204 edging out teammate Kaylee Benton who finished second shooting 72–67–67—206 at the Briggs Ranch Golf Course. During her final round, Uriell counted two bogeys and three birdies to finish 12-under. She was second in the field playing the par-3s 2-under while leading the field on the par-5s playing those holes 9-under during the three-day event.

Benton finished her round with six birdies and one bogey. She posted three birdies on the back nine finishing strong while moving up the leaderboard each round. Benton was tied for 15th after day one, moved to a tie for fifth on Monday and finished second on Tuesday.

Arkansas took a commanding lead in the second round and hung on for the win shooting 16-under 848. Southeastern Conference member No. 39 Texas A&M was second with 853, followed by No. 23 Tennessee at 861 and Mississippi State with 863.

The victory concludes the fall season for the Razorbacks. Be sure to follow us on Twitter at @RazorbackWGolf and keep up with all the amateur events during the collegiate competition break.

Inside the Ropes
• This is the first team title of the fall
• The win is the fourth top-10 finish and the third top-3 finish in four events
• Junior Alana Uriell’s first round 65 is a career-best
o The individual title is her first as a collegiate player
o She has posted six consecutive rounds under par and 10 of 12 rounds have been under par
o Uriell’s 204 ties the tournament record
• Arkansas’ second round 274 is the second-best round of the year
• The team’s total – 848 – is the second-best total for the season
• Arkansas’ 848 is tied for the third-best 54-hole total in tournament history
• Sophomore Kaylee Benton transferred to Arkansas this season. Her second-place finish is her Razorback career best
o Five of Benton’s last six rounds have been under par
• Arkansas’ 16-under performance is the second-best performance versus par (22-under at ANNIKA)
• This was Arkansas’ fourth appearance at the event and the Razorbacks have four top-3 finishes

From Shauna Estes-Taylor
“It was a proud coaching moment to watch Alana win her first college tournament. It is incredible to see how far she has come as a golfer and as a person. There is a lot of joy in what I do when you see a player turn a corner like that and I’m super proud of her. Kaylee comes in this semester and has had such a huge impact on the team. Those two had a great week but, as I told the team, we do this together. Winning takes a group effort and everyone contributed in so many ways this week. We talked a lot about ‘process over product’ and committing to one shot at a time and that came to fruition this week. I’m really proud of this group. We have had an excellent fall. It’s not just the five who are here – it’s all seven of our young ladies who come every day and do even more.”