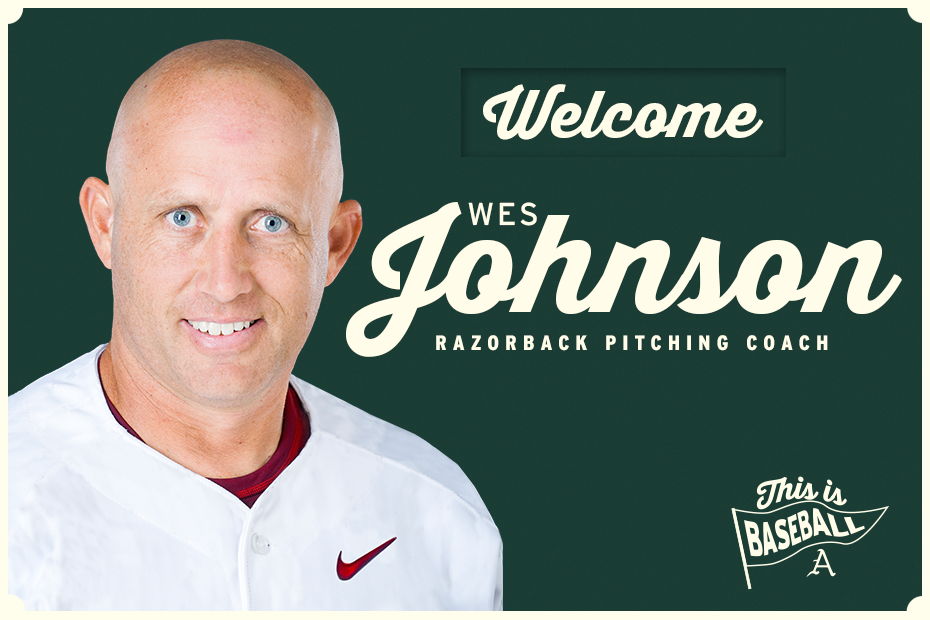 “I am humbled to return home and represent the University of Arkansas baseball program,” Johnson said. “It is a program steeped in tradition and I am excited to work with Coach Van Horn, his staff and the talented group of young men I am inheriting.”

Known nationally for his player development and ability to increase velocity throughout his staff, Johnson arrives in Fayetteville after serving as the pitching coach last season with Mississippi State. Before that, he spent four years at Dallas Baptist University, helping build the Patriots into a perennial national baseball power.

“I am pleased to add Wes Johnson, one of the nation’s premier pitching coaches, to our staff,” Arkansas head coach Dave Van Horn said. “He is an experienced college baseball coach and has played an instrumental role in the recent successes of Mississippi State and Dallas Baptist. Wes has developed a stellar reputation throughout the country, based on his ability to develop his players, both individually, and his pitching staffs, collectively, into some of the most successful performers in college baseball. I am happy to welcome Coach Johnson and his family back to his home state of Arkansas and look forward to getting him on campus to get started with our program.”

Combined during his tenure at Dallas Baptist and Mississippi State, Johnson helped his teams advance to four NCAA Regionals and most recently a Super Regional with the Bulldogs, whom he helped win the 2016 SEC Regular Season Championship.

Johnson’s track record for development is apparent in the fact that he has had 30 pitchers drafted or sign professional contracts in the last nine years.

Johnson was one major reason Mississippi State was able to go from worst to first in 2016. After the Bulldogs only totaled eight wins in 2015 and had the highest ERA in the league, Johnson developed MSU’s pitching staff into one of the best in the country, helping the team win 44 games, its most since 1997.

Led by Hudson, Mississippi State’s team ERA improved by more than a full earned run this year (3.35), while Hudson took home first team All-SEC honors, second team All-America honors from Baseball America and was a semifinalist for the Golden Spikes Award. Hudson led the team with a 9-5 record and a 2.55 ERA with 115 strikeouts this year.

Arguably, his greatest success story is former DBU righty Brandon Koch, who arrived in Dallas as a shortstop and left as the greatest closer in school history. Working daily with Johnson, Koch went from a 7.20 ERA his freshman year to breaking the school record with a 0.64 ERA in 2014.

That season he and fellow pitcher Paul Voelker earned first-team All-MVC honors, leading the staff to new school records in strikeouts (506) and batting average against (.248), while winning the MVC Tournament and receiving the No. 2 seed in the TCU Regional.

In 2015, Koch shattered the school record with 15.91 strikeouts per nine innings. As a result, the hard-throwing righty earned All-America honors from four different media outlets in his final year with the Patriots, as well as being named an NCBWA Stopper of the Year finalist.

Prior to DBU, Johnson served as the pitching coach at Central Arkansas for three seasons, where his pitchers set Division I school records in ERA, WHIP, strikeouts, opponent batting average and fewest walks. Johnson had five players who were either drafted or signed professionally during his time in Conway.

Sandwiched in between stints at UCA, Johnson mentored pitchers as an assistant at Southern Arkansas, Led by Hayden Simpson, the 16th overall pick in the 2010 MLB Draft, five more of Johnson’s pupils were drafted or went pro. In 2009, he helped lead the Muleriders to a 52-11 overall mark after owning a top-10 ERA nationally while setting school records in strikeouts and fewest walks allowed. The 499 strikeouts broke a Gulf South Conference record and were a big reason why USA was ranked No. 1 in the Division II Top-25 for 20 weeks.

Aside from his collegiate coaching experience, Johnson spent four seasons as the head coach of Abundant Life High School in Sherwood, Arkansas. During his tenure there, Johnson guided the Owls to an impressive 102-25 overall record.  In his final two campaigns for ALHS, he led the team to two straight state championship games, which resulted in a state championship in 2006 and a runner-up finish in 2007. While coaching high school and American Legion from 1997-2007, 28 players signed an NCAA Letter of Intent. In addition, four players were drafted.

Johnson earned a degree in marketing in December 1994 from the University of Arkansas Monticello. While at DBU, Johnson earned 33 hours working toward his masters in kinesiology. Off the field, he and his wife Angie have three children – Ryan, Anna and Ava.