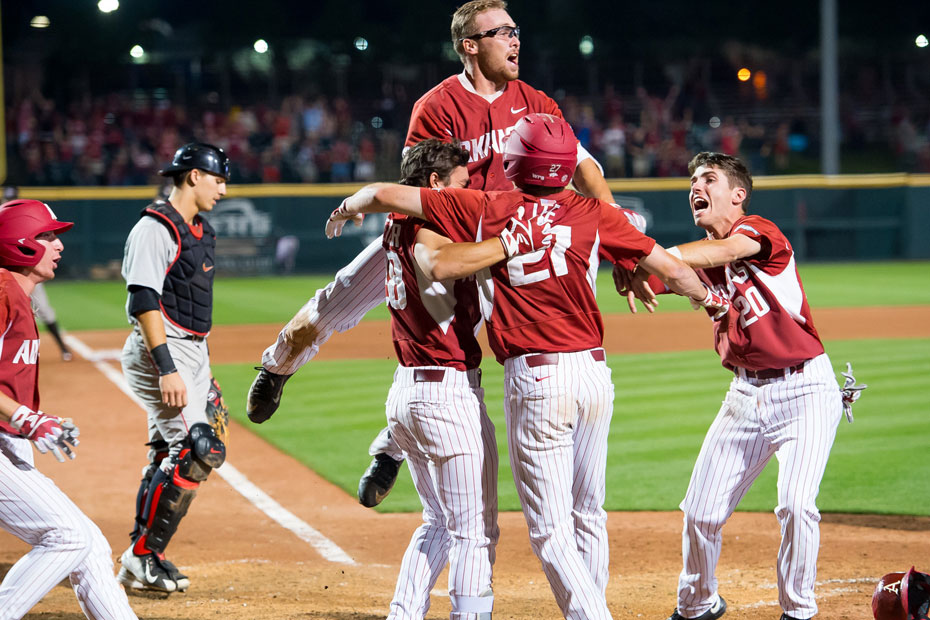 FAYETTEVILLE, Ark. – Evan Lee scored the game-winning run in the 10th inning Friday night after Georgia committed two errors on a sacrifice bunt attempt by Eric Cole, giving the 15th-ranked Razorbacks the 5-4 victory over the Bulldogs. Lee, who reached earlier in the inning on a leadoff walk, scored from second after Georgia threw the ball away twice, securing the fourth conference series win for the Hogs.

Arkansas is now 28-8 on the season overall, winning three in a row, and are 10-4 in Southeastern Conference play, holding a half-game lead in the Western Division over Mississippi State, which won its first game of the weekend earlier in the evening.

In the 10th inning, Lee was brought in to pinch hit for third baseman Jack Kenley, his second pinch-hit appearance in as many weekends. The freshman worked a full count before drawing the walk to put a runner on with no outs.

Cole followed and dropped a sacrifice bunt right to the pitcher and looked to be on his way to beating out the throw. However, Georgia’s pitcher, Blake Cairnes, threw the ball over the first baseman’s head, allowing Cole and Lee to move up an extra base.

As the throw sailed to the backstop, Lee was held up at third, but the throw back into the infield from the right fielder went over the catcher’s head, allowing Lee to score the game-winning run.

Cole led all Razorback hitters with a 4-for-5 night at the plate, his first four hit game of his career. With the exception of his game-winning bunt single, three of his hits came with two outs.

In the game, Arkansas hitters went 11-for-20 (.550) and four of the five runs scored with two outs. It continues a trend for the Razorbacks as they are hitting .290 this year with two away in an inning.

Junior Luke Bonfield was 2-for-5 in the game with two RBIs and a home run in the seventh. His two-run blast was his second of the series and seventh of the year. At the time, it put Arkansas up 3-2 for its first lead of the game, but Georgia stormed back with a two-run ninth to send it to extras.

Sophomore Jake Reindl earned the win, his first of his career, after going scoreless over the final two innings, giving up just one hit and striking out one.

Moments That Mattered
Both starting pitchers threw well past the third inning with only five hits combined between both teams in the first three frames. The first run of the game didn’t score until the fourth inning when Georgia’s Michael Curry hit a solo home run into the left field bullpen, his third of the series to take a 1-0 lead.

Arkansas responded in the bottom half with a run of its own after a Dominic Fletcher two-out RBI single to make it 1-1.  It was Fletcher’s only hit of the night.

Arkansas starting pitcher Trevor Stephan tried to work through the fifth inning after scattering four hits and striking out five, but gave up a lead-off double to Tucker Bradley and then got two quick outs before Arkansas head coach Dave Van Horn decided to go to the bullpen.

Stephan finished with 4.2 innings pitched and two runs given up with six strikeouts. Cannon Chadwick followed with 2.2 scoreless innings and one hit allowed to take the Hogs into the eighth inning.

The Razorbacks seemed to have the game in hand after taking the 3-2 lead in the seventh on the Bonfield home run and then getting an insurance run in the eighth when Jake Arledge singled home Jax Biggers for his only RBI of the night, making it 4-2.

However, Georgia scored twice in the ninth inning after a throwing error by Carson Shaddy on an attempted double play, making it 4-4.

Reindl, threw a perfect top of the 10th inning, getting some help from an inning-ending double play from Shaddy, to set up the dramatic finish in the bottom half from Lee.

Razorback Quotables
”He is a really good runner. He is a strong runner. He runs the bases extremely quick. He is probably the quickest guy running around the bases for us just because of effort and know how.” – Head coach Dave Van Horn on Evan Lee’s baserunning

“You know, they stayed positive. We stayed positive. You know we’re like ‘Hey, we’re here, we might as well win it.’ It was big for us to come back and win that game.” – Head coach Dave Van Horn on his team’s ability to fight back

“It was crazy. Me and Tony (Vitello) were kind of looking at each other. My eyes were wide open, his eyes were wide open. We were kind of like deer in some headlights. All of the situations went through my head. If I get thrown out at the plate there’s one out and a runner on third, if I score all of these situations in a matter of like 5 seconds and then I was just like ‘go’. It wasn’t the prettiest thing, but It happened.” – Evan Lee on scoring the game-winning run

“That’s baseball, there’s a bunch of things that can happen in the game of baseball. In that instance, we came through. Sometimes you lose those games, but then again we had that same situation and sometimes you win them. Baseball is day to day, and I’m glad we won today.” – Evan Lee on the crazy ending to the game

“That was incredible. As a freshman too, he’s beyond his years. The composure, that was big time. It was big for the team. It shows how well prepared he is.” – Luke Bonfield on Evan Lee’s 10th-inning lead-off walk

Up Next
Arkansas and Georgia will finish its three-game series on Saturday with first pitch slated for 2 p.m. The game will be broadcast on SEC Network+ and can be heard in its entirety on the Razorback Sports Network on the Radio with Phil Elson on the call.