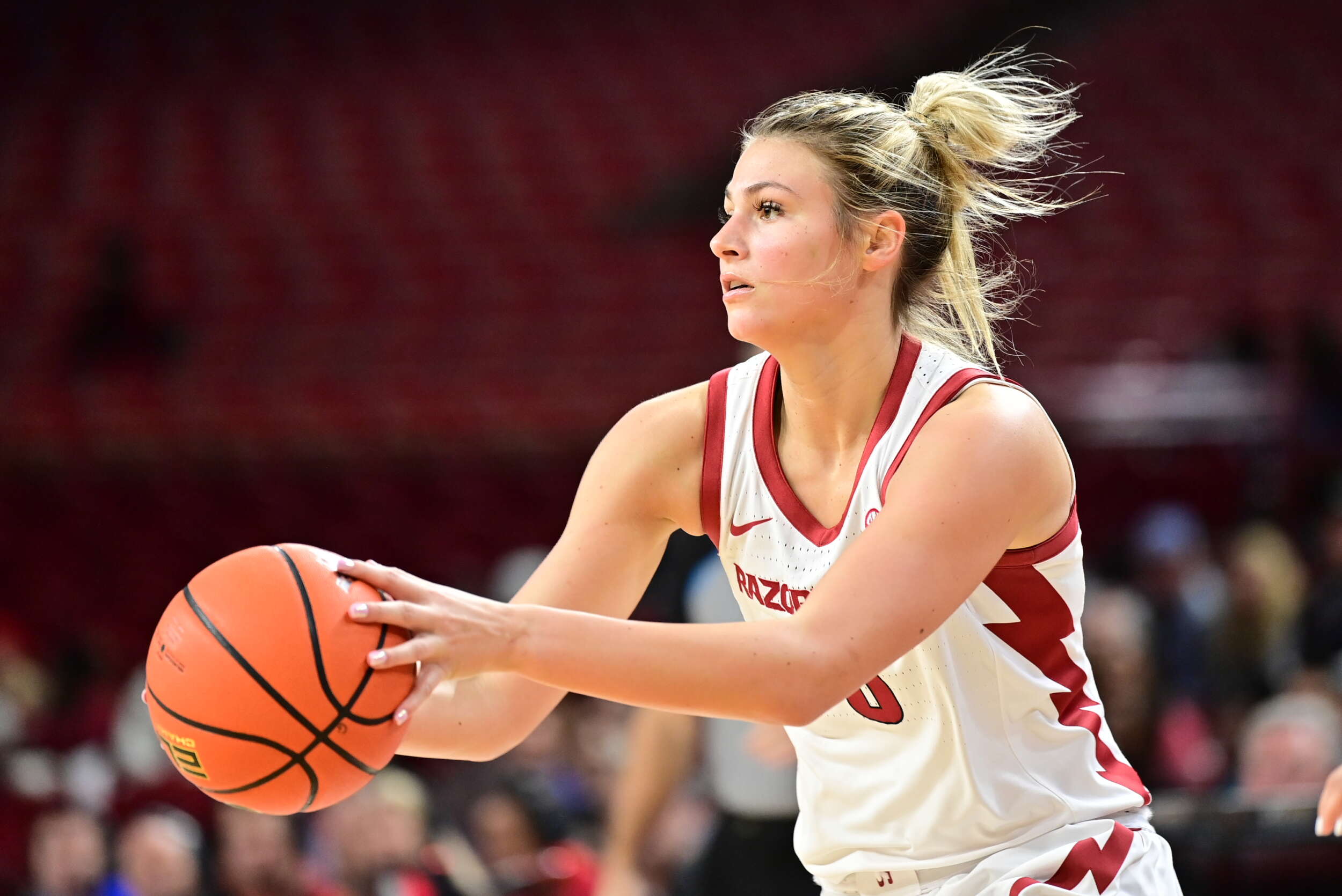 FAYETTEVILLE – In a clash between two undefeated teams on Monday night, Arkansas women’s basketball edged out Tulsa, 79-70. On a cold snowy night in Northwest Arkansas, both teams were on fire from deep with a combined 23 3-pointers, while Erynn Barnum led all scorers for the third time this season with a career-high 27 points. Arkansas has started the year 3-0 for the second time in the last three years, while handing Tulsa their first loss of the season, as the Golden Hurricane fall to 2-1.

Tulsa struck first, but then went 0-for-4 from the field, which allowed Arkansas to cruise to an 8-0 run. That run was capped off by one of Makayla Daniels’ four 3-pointers on the night. Rylee Langerman then daggered one from deep and after another Daniels triple, Arkansas led 15-5 with 4:33 left in the field quarter. Out of the media timeout, Tulsa went on a 4-0 run, but back-to-back steals by Langerman set up opportunities for the Razorback offense. After another Daniels 3-pointer, Arkansas extended its lead to 15. Tulsa then started to heat up from deep, making back-to-back 3-pointers, as the Razorbacks led 24-15 after one quarter.

The Golden Hurricane continued the hot shooting out of the break, cutting the lead to six after another 3-pointer. Samara Spencer began to heat up from deep, registering 3-pointers on back-to-back possessions to help Arkansas climb back up by 10 with seven minutes remaining in the first half. Arkansas fell in a drought for some time, going 0-for-5 from the field, but still was ahead by nine with 4:24 left in the first half. After Arkansas’ scoring drought, the Razorbacks shot 4-for-5 from the field, but that didn’t stop Tulsa from shooting 4-for-4 from the field to end the half. Arkansas still led, 41-34 going into the locker room.

Tulsa hit its seventh and eighth triples of the game out of the half to come within one point, but Langerman fed Barnum under the basket on the next possession to go back up by three. Tulsa then tied the game off, no surprise, another 3-pointer, and a few possessions later, the Golden Hurricane took the lead, 46-45, following a 3-pointer with 4:38 remaining in the third quarter. Arkansas took a 6-0 run thanks to 3-pointers from Maryam Dauda and Spencer. The Razorbacks led 54-48 going into the fourth quarter.

After Tulsa cut the lead back down to four to begin the fourth quarter, Chrissy Carr joined the party downtown with a triple to extend the lead back to seven. Tulsa just would not back down and came within two points off a layup with 7:23 remaining in the game. That was as close as Tulsa would get to taking the lead, as Arkansas closed out the quarter with a 21-13 advantage to clinch a 79-70 victory. Barnum delivered 13 of her career-high 27 points in the fourth quarter and the team went 9-for-16 from the charity stripe in the frame, which was enough to solidify the win.

Arkansas is set to host Kent State on Thursday, Nov. 17 with a 7 p.m. tipoff. The game serves as the kickoff of honoring Native American Heritage Month. More details on how the Arkansas women’s basketball team will be celebrating the month will be posted on our social media pages in the upcoming weeks.