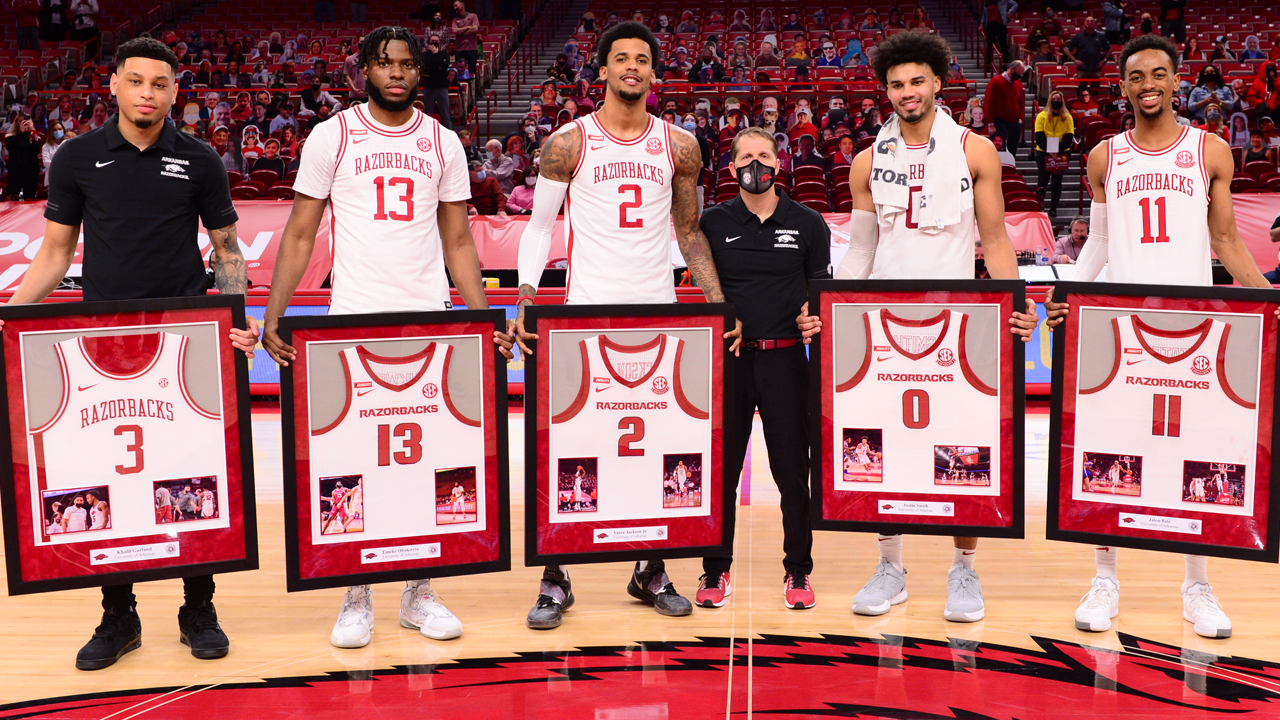 FAYETTEVILLE – The 20th-ranked Arkansas Razorbacks used two big runs in the second half to take a 21-point lead with six minutes left and held on for an 83-75 over LSU Saturday afternoon at Bud Walton Arena. After the game, Arkansas honored its five seniors – Khalil Garland, Emeka Obukwelu, Vance Jackson Jr., Jalen Tate and Justin Smith.

The Razorbacks, winners of nine straight SEC games, improve to 19-5 (11-4 in the SEC) and took control of second place in the league with two regular-season games remaining on the schedule. LSU falls to 14-8 and 9-6 in the league.

LSU made some 3-pointers down the stretch and Cameron Thomas had put-back layup with six seconds left to provide the 8-point margin of victory for the Razorbacks.

The game was the second straight “revenge” game win for Arkansas. Earlier in the year, Arkansas – playing without Smith due to an injury – lost back-to-back road games at LSU and Alabama by a combined 47 points and allowed over 90 points in each loss. This week, Arkansas defeated #6 Alabama 81-66 followed by today’s 83-75 victory.

Arkansas got 18 points each from Moses Moody and JD Notae. Moody made 11-of-14 free throws and added eight rebounds and five assists. Notae contributed six rebounds and two steals to lift the Razorbacks in the second half.

Overall, Arkansas won the rebound battle and had 17 assists on 27 made baskets. The Hogs only shot 33 percent from the field in the first half but shot an impressive 55.2 percent in the second.

LSU’s Thomas led all scorers with 25 points and Josh LeBlanc had 10 rebounds.

Up next, Arkansas will travel to South Carolina to face the Gamecocks on Tuesday (Mar. 2). Tipoff is set for 5:30 pm (CT) and the game will be televised on SEC Network.