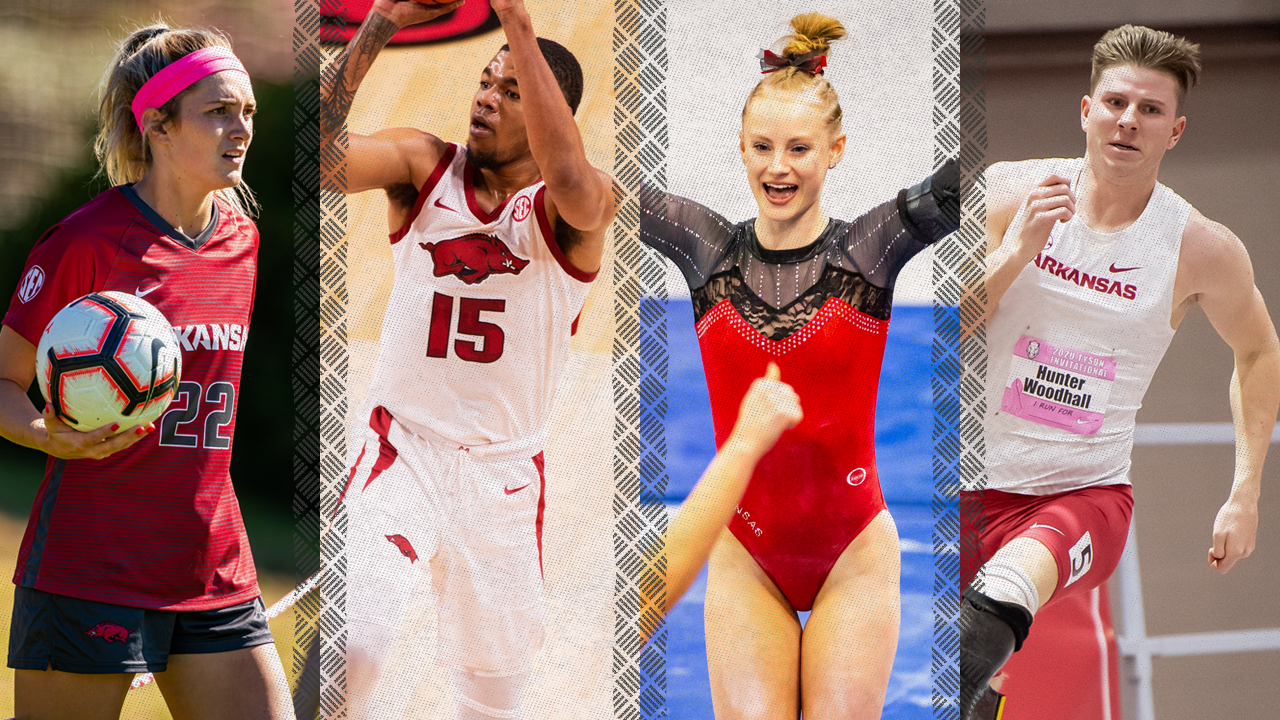 Three more HOGSPY awards were revealed on day two of the ninth annual HOGSPYs, which highlights the athletic achievements of Arkansas’ student-athletes.

The three awards were announced via Arkansas’ social media platforms and on ArkansasRazorbacks.com. The awards announced on Tuesday included:

Comeback Student-Athlete of the Year – A standout student-athlete who demonstrated outstanding resilience to overcome a significant injury, personal challenge, or hardship in order to make a profound contribution during athletic competition.

Heart of the Hog – A student-athlete who is considered the heart of the team constantly displaying a passion for Razorback Athletics. Their outstanding leadership positively influences their teammates in and out of competition.

Top Play of the Year – This award recognizes an impressive and memorable moment during competition.

The winners of the comeback student-athlete of the year award were soccer player Parker Goins and gymnast Bailey Lovett. After returning from an ACL injury, Goins finished second on the team in points and goals, while finishing tied for second in assists in 2019. She also finished in the top five in the SEC in points and goals. Lovett, who came back from a UCL injury in her elbow, competed in three of four events in every meet in 2020. She finished the year ranked in the top 70 in all three events, including 23rd on floor. She was the leading scorer for Arkansas eight times and won three titles in 2020. Other nominees included: Caleb Bolden (Baseball), Abby Gray (Women’s Cross Country/Track & Field) and Mary Haff (Softball).

The winner of the heart of the hog award was track & field student-athlete Hunter Woodhall. A double amputee from Syracuse, Utah, Woodhall was selected as the heart of his squad that claimed the 2020 SEC Indoor Championship in the spring. He also qualified for the 2020 NCAA Indoor Championships as a member of the 4×400-meter relay, while picking up silver at the SEC meet in the event. Other nominees for the award included: Tatum Rice (Women’s Tennis), Jimmy Whitt (Men’s Basketball) and Jessica Yamzon (Gymnastics).

The top play of the year was awarded to Mason Jones’ game-winning shot against Georgia Tech on Nov. 25. Although Arkansas led the majority of the game at Georgia Tech, the Razorbacks did not score the last 2:25 of the 2nd half and the Yellow Jackets forced OT. In overtime, neither team scored until Tech hit a jumper with 21 seconds left. On the ensuing possession, Jones banked in the game winner from approximately 25 feet out as time expired to secure the win. Other nominees for the award included: Katie Izzo’s 5,000M run at the Sharon Colyear-Danville Season Opener (Women’s Track & Field), Kiara Williams’ free throws vs. Texas A&M (Women’s Basketball), Robert Moore’s glove flip vs. Gonzaga (Baseball) and Softball’s doubleheader walk-off victories over Kansas.