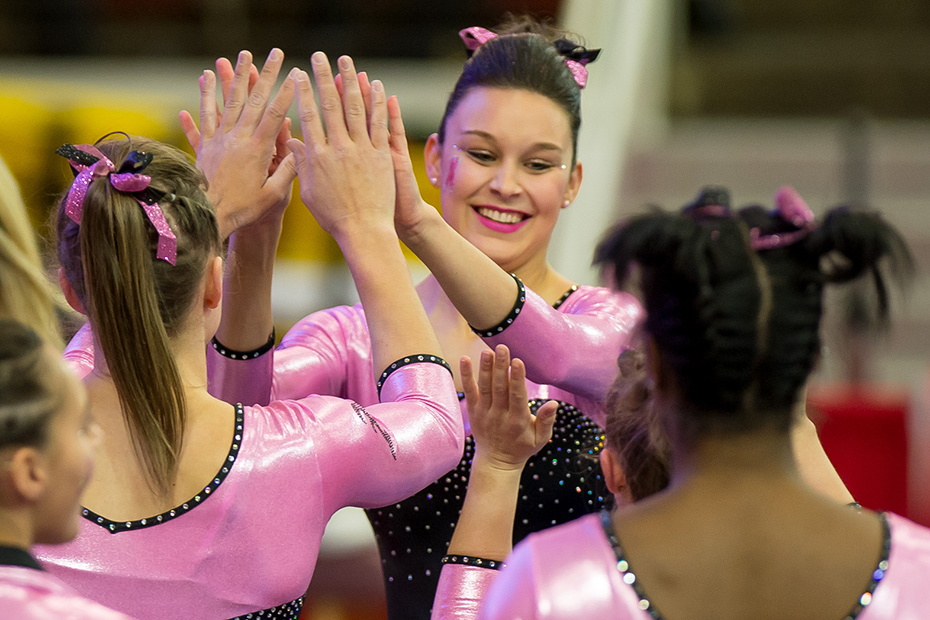 An Encore Four Years in the Making

FAYETTEVILLE, Ark. — The 4,248 fans at Barnhill Arena on Friday night and the many more watching at home witnessed the Arkansas gymnastics team tie its best performance in program history.

The No. 9 Razorbacks scored a 197.225 to match the program’s all-time record in a meet, and defeated No. 23 Kentucky – who scored a 196.700 – in the process. In all, four Arkansas gymnasts set career highs and seven tied a career best on an apparatus.

Three of those tied career-bests were from Amanda Wellick, including her score on floor exercise; the final routine of the evening. As the anchor of the lineup, Wellick needed a 9.950 to reach the hallowed number for the Razorbacks, and she hit it right on the head. She also equaled a 9.900 on balance beam from earlier this season at No. 4 Alabama and a 9.900 on uneven bars from the 2014 NCAA Regional.

Speaking of bars, Braie Speed and Erin Freier each set career-highs with 9.925’s, while Stephani Canizaro with a 9.875 and Keara Glover with a 9.850 from the leadoff spot tied theirs. Paige Zaziski scored a season-best 9.925, falling just shy of her career number of 9.950. Arkansas finished with a 49.550 for the event, good enough for the team’s best score on the apparatus in Barnhill history, and second-highest score by an SEC team this season.

On beam, the Razorbacks posted a 49.325, which marks the team’s second-best score on the apparatus in Barnhill history. Samantha Nelson set a career high with a 9.900, while Sydnie Dillard tied her season high of 9.875. Mia Bargiacchi, in her first-career competition, scored a 9.800 on beam.

To end the night on floor, Arkansas put forward a lineup of only five that needed to reach 49.350 to tie the record. Going into Wellick’s routine, the Razorbacks needed a 9.950 and the junior all-arounder didn’t disappoint. Tying her career high, she notched that number to put the cherry on top of the 197.225 that tied the program’s highest overall team score, set on Jan. 20, 2012 against LSU.

In the all-around, Amanda Wellick set a career high with 39.600 to defeat Kentucky’s Sidney Dukes and Katie Stuart – who each scored a 39.325 – to take home the title.

GYMQUOTES
“The team had a meeting this week and we came to the conclusion that we needed to step things up and correct our common mistakes. Tonight the girls came in and changed their mindset. It was good to see the team take a step in the right direction. They earned this score tonight.” — Head coach Mark Cook

“It was really great tonight to be back in Barnhill. I just wanted to go up and do the best I could for my team. I focused in on my details and did what I had to do to help bring home the win.” — Junior Amanda Wellick

UP NEXT
Arkansas is right back on the road to face No. 12 Missouri on Friday, March 4 in Colombia. It will be the Razorbacks’ final road meet of the season, as well as their last SEC dual meet. Competition begins at 7 p.m. and will be streamed on SEC Network +.