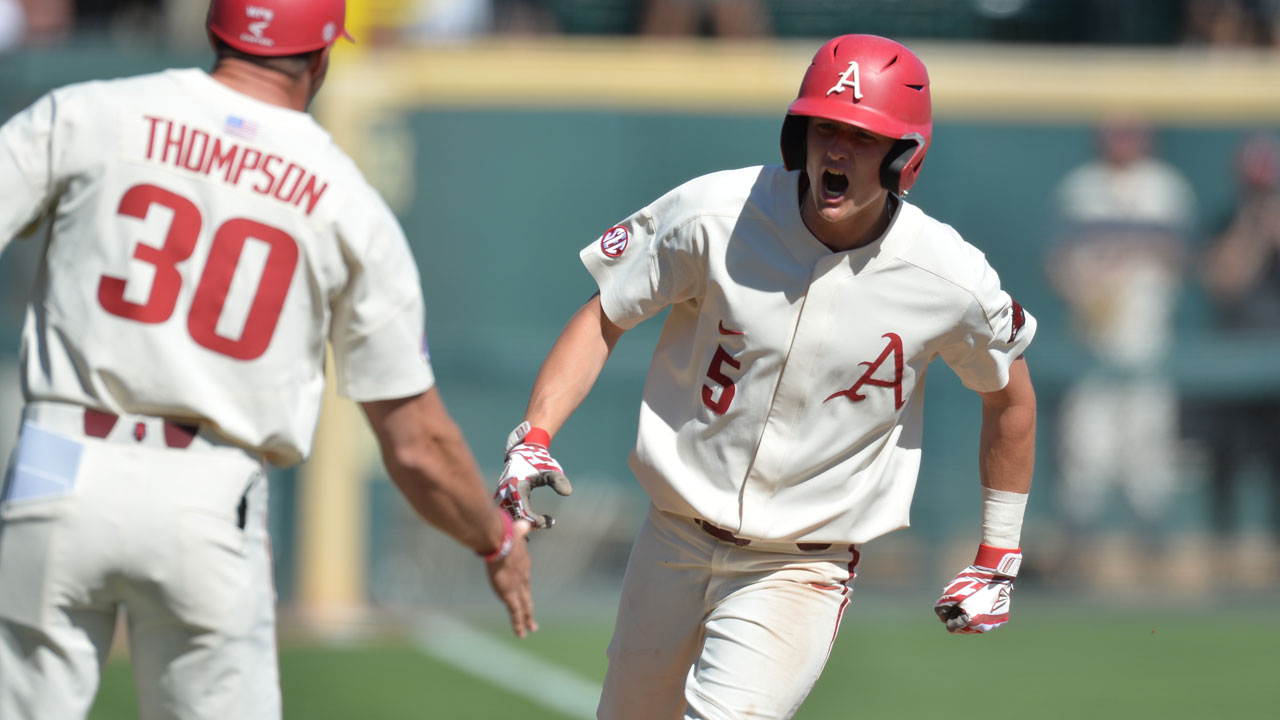 Another Ranked Opponent For Hogs As Tennessee Comes To Fayetteville

FAYETTEVILLE, Ark. – The sixth-ranked Razorback baseball team will have another tall task on its hands this weekend as it will host the 18th-ranked Tennessee Volunteers for a three-game series at Baum-Walker Stadium starting on Friday. The Volunteers will be the fifth-consecutive ranked conference opponent the Razorbacks have faced dating back to late March.

The Razorbacks (31-11, 12-6 SEC) are leading the pack in the SEC Western Division with 12 wins, just a half-game ahead of Texas A&M. The 12-6 record includes two sweeps at the hands of Missouri and then-No. 2 Mississippi State last week and is two games better than its record through the first 18 conference games last year.

Redshirt junior Isaiah Campbell will head to the mound for the 11th time this season and seventh in conference play as he brings a 2.09 conference ERA and four SEC victories to the ballpark. Campbell has amassed eight-consecutive quality starts dating back to March 1 and struck out 10 last week against Mississippi State in 7.2 innings. All 10 of his starts have been of five innings or more and he hasn’t given up more than three walks in 22-stright outings.

Freshman left-hander Patrick Wicklander will get the ball on Saturday and seems to have solidified his spot in the rotation late in the season. Although six of his eight starts this year have come against non-conference opponents, Wicklander has only allowed two earned runs against SEC teams this year in nine innings of work and struck out 12.

Phil Elson and Bubba Carpenter will have the radio call all three days on the Razorback Sports Network.

Fans can listen to the radio call via the Razorback Gameday app and locally on KQSM 92.1 FM. Pregame coverage begins 30 minutes prior to first pitch. There will also be a live radio link available on ArkansasRazorbacks.com. LISTEN LIVE

Kjerstad Picks Up Where He Left Off
Taking his first game off in his Razorback career last Saturday after being ejected in Friday’s game against Mississippi State, sophomore Heston Kjerstad returned to the lineup on Tuesday against Northwestern State and didn’t miss a beat, going 3-for-4 with an RBI and two runs scored. His lone RBI came on a 417-foot home run in the second inning that bounced off the batter’s eye in centerfield. It was his 10th home run of the year and 24th of his career.

Washington Coming Up Big When Called
Tuesday’s three-hit night wasn’t an anomaly for freshman Curtis Washington, Jr. The West Memphis, Arkansas native has been one of Arkansas’ first hitters off the bench this year as he’s made six pinch-hit appearances and four starts in the outfield. Of his 10 hits, all have come in non-conference play and Tuesday’s three-hit game was his second multi-hit game of the season. Washington is now batting .400 (10-for-25) and has four extra-base hits.

Razorback Prime Nine
>> Arkansas will face No. 18 Tenessee for a three-game set this weekend at Baum-Walker Stadium. Tennessee will be the fifth ranked team the Hogs will play in consecutive weeks in SEC play.

>> Arkansas is 7-2 in conference games played at home this year and are averaging 5.4 runs per game. The pitching staff has combined for a 3.56 ERA in those nine games, but has a 2.45 strikeout-to-walk ratio and Isaiah Campbell is 3-0 in his three starts.

>> The Razorbacks picked up their second SEC series sweep last week, winning three games against second-ranked Mississippi State and now lead the SEC Western Division by a half game over Texas A&M.

>> Sophomore infielder Casey Martin was named the SEC Player of the Week on Monday. Martin hit .471 last week with six of his 10 RBIs coming against Mississippi State. Martin also hit his first grand slam of his career and now has eight home runs this year.

>> Freshman right-hander Connor Noland won the SEC Co-Freshman of the Week award after throwing 9.2 combined scoreless innings against Arkansas-Pine Bluff and Mississippi State. Noland never walked a batter last week and the 7.2 innings vs. MSU was a season-high.

>> Outfielder Dominic Fletcher hit his eighth home run of the year on Wednesday against Northwestern State, giving him 30 for his career. He needs just three more to break into the top-10 on the all-time Arkansas career home run chart.

>> Casey Martin leads the SEC in doubles heading into this weekend’s series with Tennessee. With his two-bagger on WEdnesday against Northwestern State, he now has 18 doubles, which is four more than a year ago and 32 for his career.

>> Isaiah Campbell continues to be the Hogs’ Friday night starter and has seven wins on the year after striking out 10 against Mississippi State last week. Campbell has eight-consecutive quality starts dating back to March 1.

>> Sophomore Heston Kjerstad is on a 14-game hitting streak and is hitting .369 during the span. Nine of his 24 hits have gone for extra-bases and 16 RBIs. Five of his 10 home runs have come in the last 14 games.