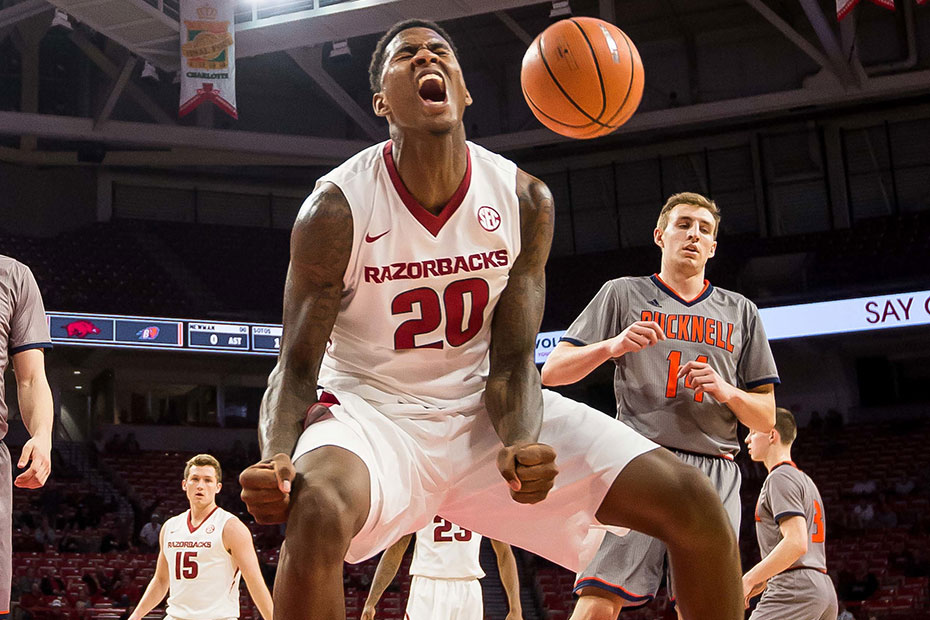 The Arkansas men’s basketball team used its largest offensive output in two years to defeat the Bucknell Bison Sunday night 101-73 to improve to 2-0 this season.

First Half
After Bucknell opened the game with a three-pointer, the Bison and Razorbacks would trade a few early baskets, before Arkansas settled in and gained control of the tempo and ultimately, the game.

Senior guard Jaylen Barford sparked Arkansas early, sinking his signature fade-away to give the Hogs the lead at 9-8. The Razorbacks would go on an 8-0 run, using their defense to create offense. Barford finished the first half with 21 points, giving him his sixth 20-point effort of his career, first inside Bud Walton Arena.

It did not take long for freshman forward Daniel Gafford to put his length and versatility on display. The 6-11 big man was able to drive to the rim and snag his own miss for an easy lay-up. On the other end of the floor, he was part of a trap under the basket that forced a turnover. He proceeded to run the floor and clean up boards with a put-back slam, putting the Hogs up double-digits for the first time in the game.

In the season opener, Arkansas tallied 12 dunks, thanks in large part to their passing. Sunday, the trend continued, as Barford drove to the basket and left it for sophomore forward Adrio Bailey to slam it home for his fourth of the season.

One of sophomore guard C.J. Jones’ points of emphasis this season is to expand his game on the defensive side of the court. Jones got his hand in the passing lane late in the first half, forcing his second career steal, leading to a lay-up by freshman guard Darious Hall.

Senior guard Daryl Macon drilled a three as time expired in the first half, to cap a 22-8 Arkansas run to end the period. Macon finished the first half with 12 points and two assists.

Arkansas shot 55.6 percent from the field in the first half, including ending the half, making 18 of its final 23 shots.

Bucknell opened the second half, sinking three straight three-point attempts after missing its first, to bring the game within 18. That is as close as the Bison would get, as the Razorbacks used nice passing that led to easy buckets.

Macon showcased his passing ability, leading to an easy touch shot by Gafford. Gafford’s first six points of the second half came on easy touch lay-ups.

Bucknell shot well from the field in the second half, but struggled slowing down the Razorbacks.

Macon finished the game with 21 points, after sinking this three. It is Macon’s fourth 20-point performance of his career.

The highlight of the game goes to Hall. The fourth and final dunk of the contest was a jaw-dropper.

• With Arkansas’ 22-point lead at halftime, the Razorbacks have lead each of their opponents by more than 20 points at the break. It is the first time since 1993-94 that Arkansas has led each of its first two opponents of the season by 20 or more points at halftime.

• Barford and Macon tallied 20-plus points, becoming the first Razorback duo to record 20 or more points in the same game since Moses Kingsley (23) and Barford (20) against Seton Hall in the first round of the NCAA Tournament.

• Arkansas’ 101-point scoring performance is the most 137th century effort in Arkansas history and the first since posting 117 against Northwestern State on Dec. 1, 2015.

• The Razorbacks have scored 95 points or more in their first two games of the season for the first time since 1997-98.