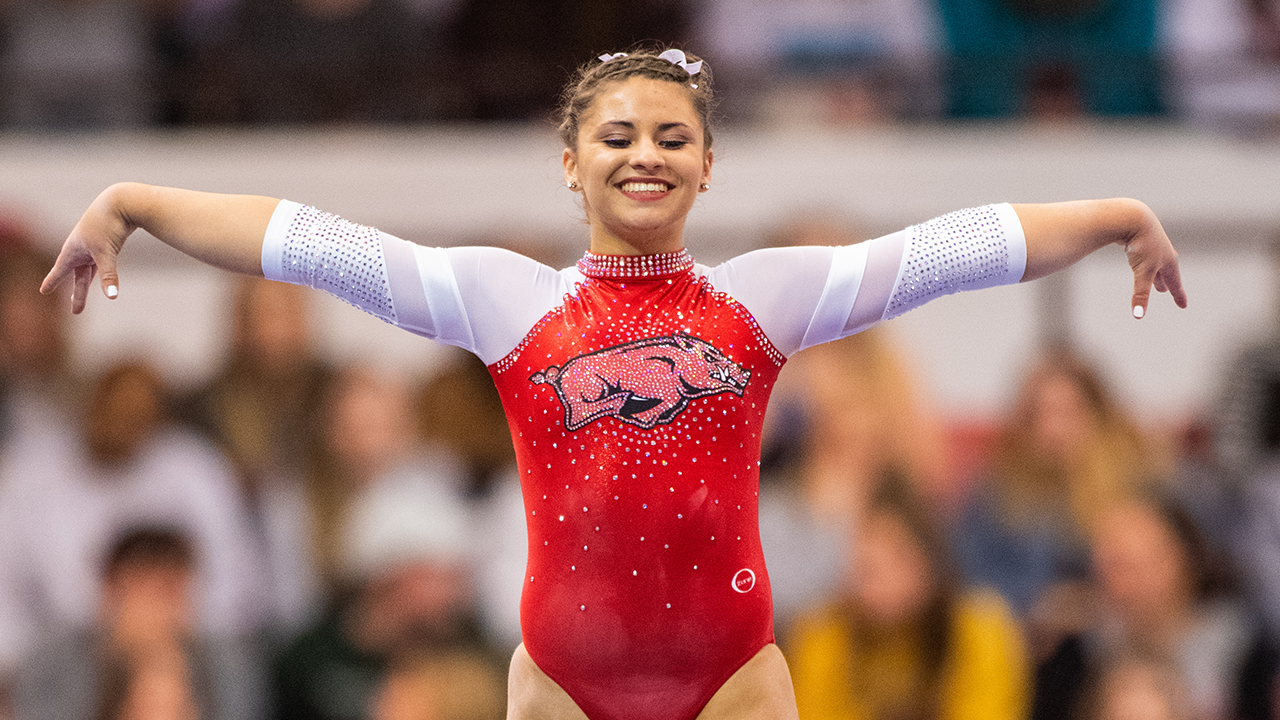 DENTON, Texas – The Arkansas gymnastics team bounced back in Denton on Friday evening, posting a score of 196.300 and earning a second-place finish among the teams. The Razorbacks’ 196.300 is their second-highest road score of the season.

Freshman Kiara Gianfagna claimed her first title since arriving at Arkansas, claiming the all-around title with a final score of 39.000. The Gymbacks are taking five total titles back to Fayetteville, including Sarah Shaffer’s vault title, a bars title for Kennedy Hamrick and Bailey Lovett and a floor title for Sophia Carter.

Arkansas made it a point to finish strong on their opening event and with the help of Carter and Amanda Elswick, closed out the first rotation in second place with a team score of 48.950. Carter’s back handspring layout, step-out series propelled her to a 9.850 in the fifth spot, followed by a solid anchor score from Elswick, who’s back handspring 1.5 stuck dismount landed her a 9.875. Elswick’s 9.875 ties her season high, as she finished second among all competitors in the event.

Two rotations in-a-row, we saw Carter shine. She earned the event title with a 9.925, her sixth score of 9.900 or higher in the event this season. Leading up to Carter’s fiery routine, Shaffer, Hambrick and Lovett all scored a 9.875. Arkansas was holding steady in second place midway through the meet with a combined score of 98.325, the Gymbacks highest two-rotation score of the season.

Shaffer’s Yurchenko layout half was the highlight of the vault rotation for Arkansas, earning a perfect score from one judge, Shaffer finished with a career-high 9.925 on the apparatus. It’s the highest score on the vault since 2018 when Braie Speed posted the same score at No. 5 Florida. Freshman Madison Hickey also saw a career-high on the vault, her Yurchenko full complete with stuck dismount landed her a 9.875.

Arkansas closed out the night on a high note, with its highest bars rotation in four weeks (49.150). Gianfagna started strong for the Gymbacks, posting a 9.800 with her full-twisting double-back dismount. Lovett executed her ray beautifully and Hambrick nailed her giant full, double-back as the duo each earned the event title with a score of 9.875.