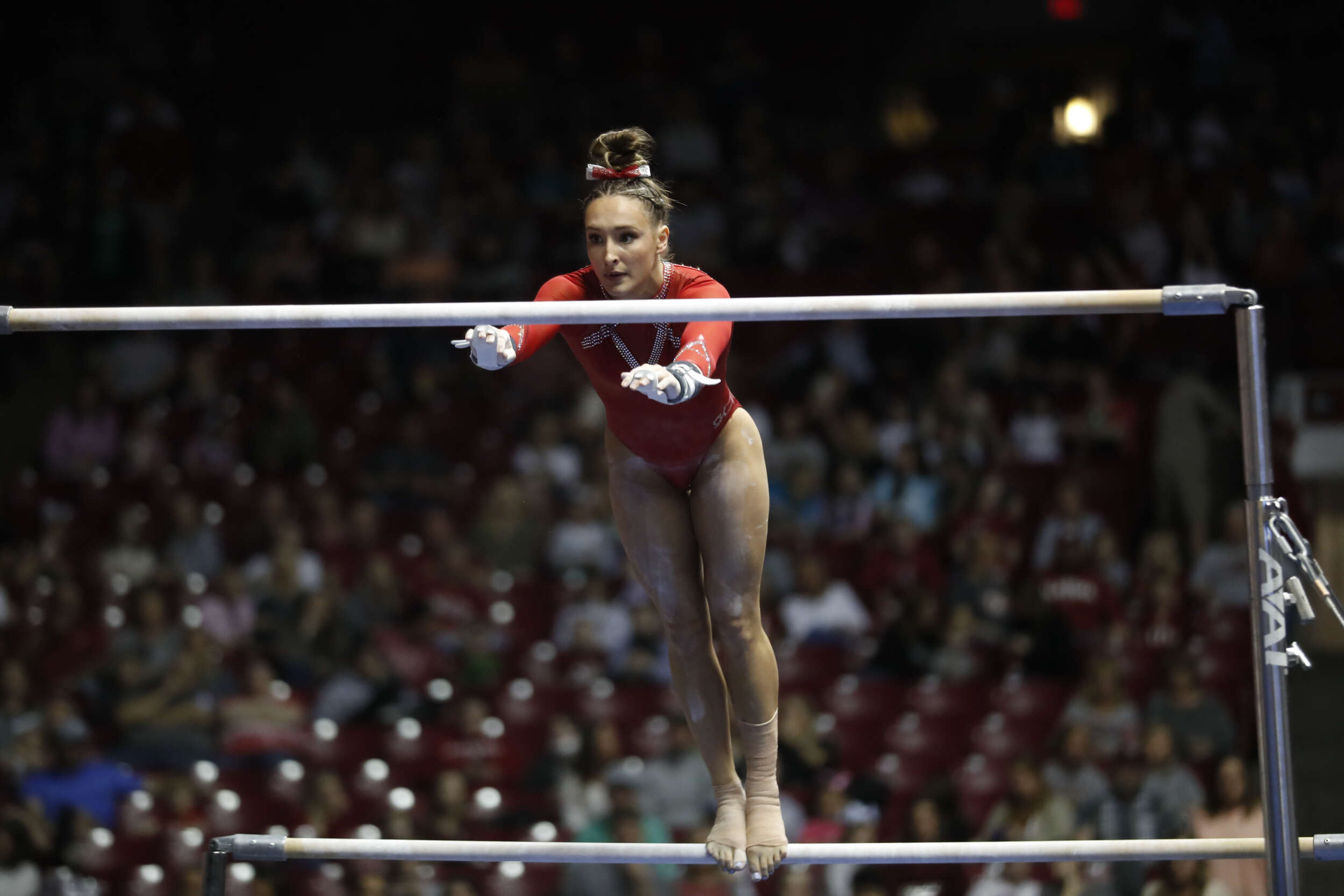 Arkansas Comes Up Short in First of Two Weekend Meets

The Gymbacks began an action-packed weekend in Tuscaloosa on Friday night with the first of two competitions and fell to the No. 7 Crimson Tide 196.000-198.050.

The meet marked the end of the SEC slate for the two teams, and they will both meet again along with Auburn and Georgia on Sunday for Elevate the Stage in Huntsville, Ala. at 1 p.m.

A bright spot on the night came in the Gymbacks’ very last routine as senior Amanda Elswick closed out the competition for Arkansas with a 9.950 on beam, which matches a career high and earned her her second beam title in as many weeks.

Freshman Leah Smith also posted a top-three finish with a career-high 9.875 on vault for third place and she came in second all-around with a final score of 38.800.

Bars
Arkansas began the night on bars, an event that has given the team some trouble throughout the season. While the Hogs still had to count a fall in the end, they posted solid scores from Smith (9.825) and sophomore Jensen Scalzo (9.875) in the first half of the lineup. Graduate student Maggie O’Hara bounced back from a fall this week with a clean routine for a 9.875, and senior Kennedy Hambrick posted Arkansas’ highest score of the night with a 9.900 with a stuck landing, just shy of top three on the night.

Vault
Senior Savannah Pennese showed her veteran confidence in the lead-off spot for Arkansas on vault and stuck her Yurchenko full for a 9.825 that got the Gymbacks off to a strong start. Smith followed with a stellar full of her own for a new personal best of 9.875 that kept Arkansas on pace. The Hogs added two more 9.825s from Hambrick and freshman Makenzie Sedlacek, and a 9.800 for graduate student Sarah Shaffer rounded out Arkansas’ vault scores for a 49.150 total the team’s third-best score of the season.

Floor
Pennese led off for Arkansas again, this time on floor, in the third rotation and rebounded from a fall last week in a big way with a 9.850. The Gymbacks has a dynamic duo emerging in the middle of the floor lineup with rookies Maddie Jones and Sedlacek going back-to-back. Both turned in solid routines with clean, controlled passes for matching 9.875s to keep the momentum up for the Hogs. Lovett added another 9.875 after sticking her double layout and nailing her second pass. A counted fall hampered Arkansas’ overall score, a 48.750.

Beam
The team closed the evening on beam and made the most of it, each routine a better mark than the last and a final rotation score of 49.275. Freshman Kalyxta Gamiao continued to shine and hit her double layout-stepout series and other skills with ease for a 9.775 to start. It only went up from there as Smith added a 9.825, Lovett a 9.850, and Hambrick a 9.875 with a stuck dismount to bring up Elswick. She delivered a near-flawless routine with a clean and controlled back handspring layout series and front aerial. A solid dismount granted her a score of 9.950 to match her career high and for her second beam title of the season.

Up Next
Arkansas travels north to Huntsville to compete at Elevate the Stage on Sunday for rematches with Alabama, Auburn and Georgia. The meet is set for 1 p.m. CT and will be streamed via FloGymnastics.