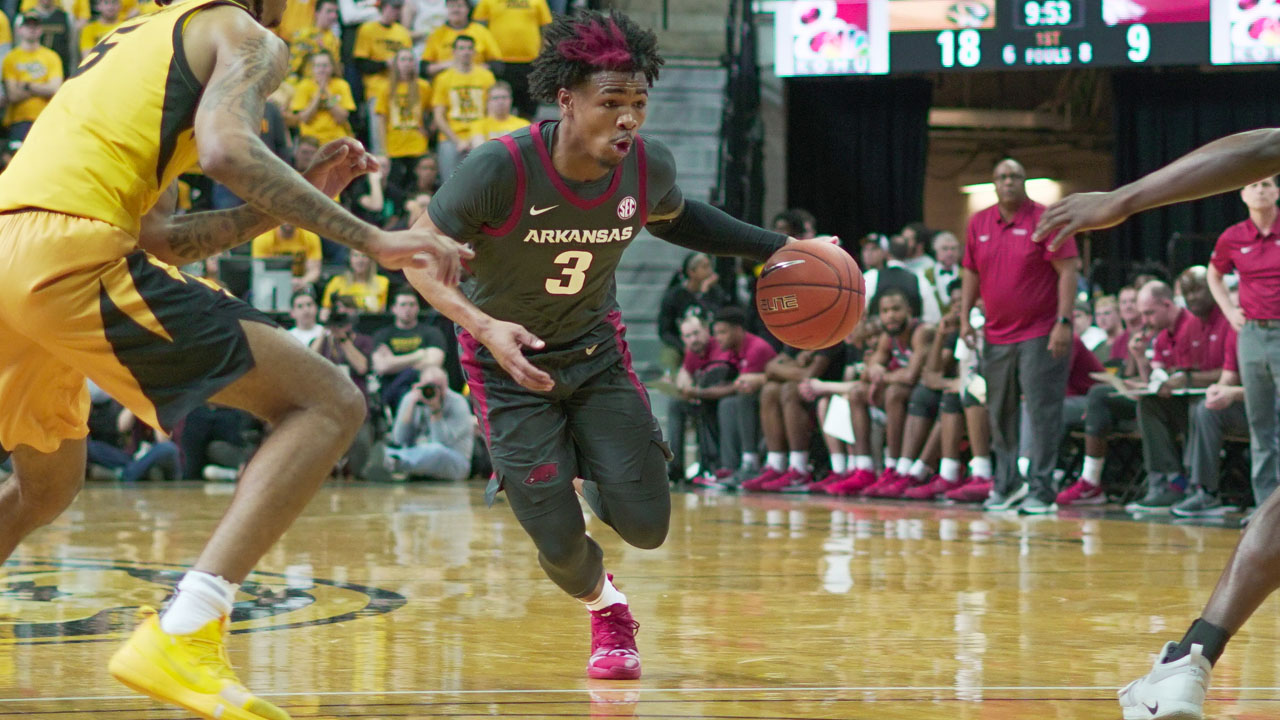 COLUMBIA, Mo. – For the second time in as many games, Arkansas pushed its opponent to overtime but could not pull out the win. On Saturday, Missouri defended its home court with an 83-79 victory over the Razorbacks at Mizzou Arena.

The loss spoiled a career game from Arkansas sophomore Reggie Chaney. He posted his first career double-double with a career-high 17 points and tying his career high with 11 rebounds while adding two steals and two blocked shots.

Missouri was in control most of the first half, except for 40 seconds Arkansas led. However, the Razorbacks were able to hang around and trailed by six at halftime, 36-30.

The Razorbacks opened the second half with a 12-6 run to tie the game, 42-42 at the 12:49 mark. The Tigers responded and led by as many at seven (54-47) with just under nine minutes left in regulation. Arkansas bounced back to lead, 56-55, with 6:10 left in the second half. From that point, the lead changed hands three times. Missouri’s Javon Pickett sank two free throws at the 1:19 mark to go up two before Desi Sills scored on a layup with 33 seconds left to tie the game, 67-67.

Arkansas’ defense, like it did versus Auburn on Tuesday, forced a shot clock violation on the Tigers’ last possession. Jalen Harris had a shot at the buzzer but missed to force overtime.

In overtime, Mizzou led by as many as seven twice, the last being 79-72 with 1:32 left. Arkansas got a quick layup from Harris and quickly forced a turnover. Desi Sills drained a 3-pointer to get the Hogs to within two, 79-77, with 34 seconds left. The teams traded baskets and the Tigers maintained a 2-point. Xavier Pinson was fouled with 16 seconds left and he sank both free throws to push the lead to four, 83-79. Arkansas could not convert, and the Tigers missed their final two free throws with five seconds left to provide the final score.

Pinson led Missouri with 24 points, making 12-of-13 free throws. Overall, the Tigers were 34-of-44 from the free throw line as Arkansas was whistled for 35 fouls, three shy of the school record.

Arkansas was 28-of-39 at the charity stripe, committed 14 turnovers and saw four players foul out. The Razorbacks did force 17 turnovers.

Arkansas stays on the road to face Tennessee on Tuesday (Feb. 11 at 6 pm CT). The game will be televised on the SEC Network.