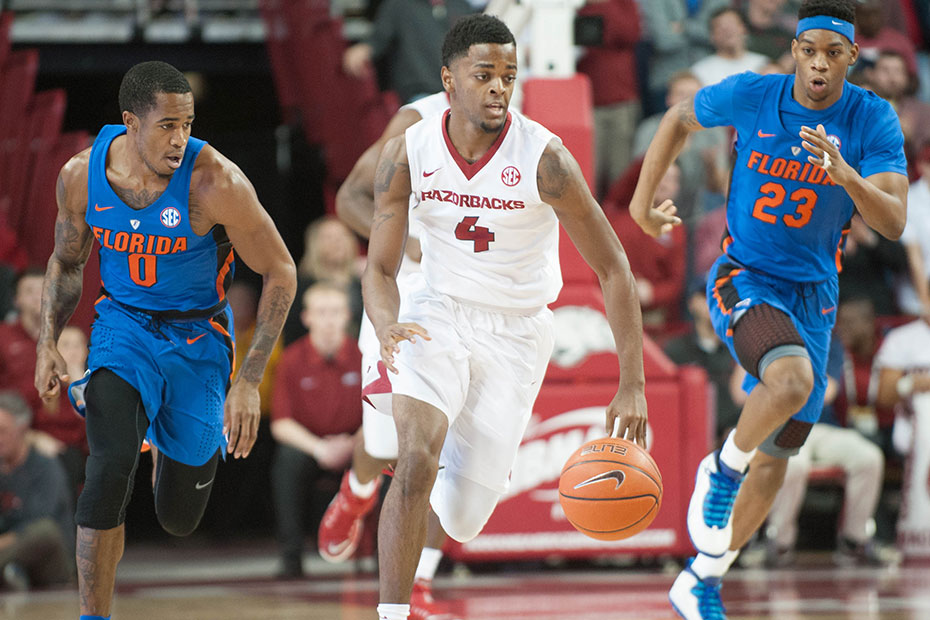 Daryl Macon lead the Razorbacks in the first half, scoring nine of Arkansas’ first 12 points and sinking his first three shots from behind the arc in less than 90 seconds. Moses Kingsley was all over the boards in the opening frame, pulling down seven first-half rebounds.

Arkansas opened the second half on a 7-1 run to cut the deficit to three, but the Razorbacks were unable to fight off the Gators. Florida built a 16 point lead late in the second half and Arkansas could not recover.

The Southeastern Conference’s active leader in double-doubles, Kingsley recorded his third of the season and 20th of his career with a 13-point, 14-rebound effort. The big man also had four swats to extend his streak to 43 of the last 46 games with a blocked shot, including multiple blocks in nine contests this season.

Anton Beard led all scorers off the bench with a 10-point performance, scoring in double figures in three straight contests.

WHAT THEY ARE SAYING
“Well it wasn’t our day, you can say that Florida had a lot to do with that. I thought they played with a great sense of urgency, I thought their defense was good at times and we had an opportunity to make some runs and we did some things to shoot ourselves in the foot.” – head coach Mike Anderson

UP NEXT
Arkansas will go on the road for its next two game, traveling to Knoxville, Tennessee, to face the Tennessee Volunteers on Tuesday, Jan. 3 at 5:30 p.m. CT. The Razorbacks will conclude their two game road trip in Lexington, taking on No. 8 Kentucky on Saturday, Jan. 7 at 7:30 p.m. CT.