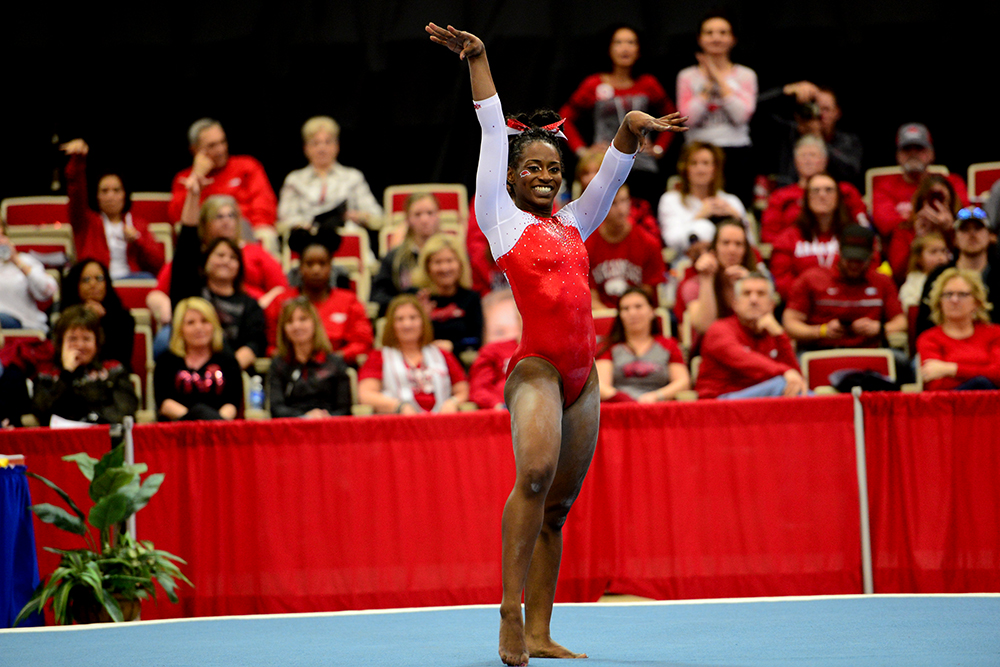 Arkansas Eases Past Auburn For Second Win Of Season

“It was a good meet,” said head coach Mark Cook. “Hailey Garner competed on vault for the first time in two years and looked strong. On Bars we were lights out. It was a good meet. We were a little bit tired on balance beam, but we finished strong on the floor. ”

The 1.875-point final margin was the widest in the 16-year series history against Auburn. Arkansas’ 196.750 was its second-highest score of the season and fifth-straight over 196.

“It felt really good to be back at home tonight,” said Wellick. “We started off on vault dialed in and kept the momentum going.”

Second Rotation: Arkansas Bars: 49.450, Auburn Vault: 48.775
Four scores of 9.900 gave Arkansas a huge advantage through two rotations as the Razorbacks posted their second-highest bar score in program history. Shaffer began the high scoring with a 9.900 in the second spot, as fellow freshman Sydney Laird followed that up with a 9.850. Arkansas’ three anchors again posted high scores, this time as Wellick, Speed and sophomore Hailey Garner all scored a 9.900 to give the Razorbacks a 49.450 event score.

Third Rotation: Arkansas Beam: 49.050 , Auburn Floor: 48.900
Wellick and sophomore Michaela Burton led the Razorbacks on beam with scores of 9.850 each. Sophomore Jessica Yamzon recorded a 9.825 to round out the top-three for Arkansas. The Razorbacks recovered from a single low score to post a 49.050 and extend its lead over the tigers to 1.525 points.

Fourth Rotation: Arkansas Floor: 49.275, Auburn Beam: 48.925
The Razorbacks posted a 49.275 in the final rotation to take the team event title in all four events for the first time this season. Arkansas extended its lead even further in the final rotation led by Shaffer who posted her second 9.900 of the night. It’s the second-straight meet with a 9.900 on floor for Shaffer, and her second-consecutive meet recording two 9.900’s. Yamzon and Burton were just behind Shaffer with 9.875’s each.

Up Next:
Arkansas heads to St. Louis, Missouri for the Mardi Gras Invitational against LSU, Missouri and George Washington. The meet is scheduled to begin at 6:30 p.m. and will stream live on FloGymnastics (subscription required).