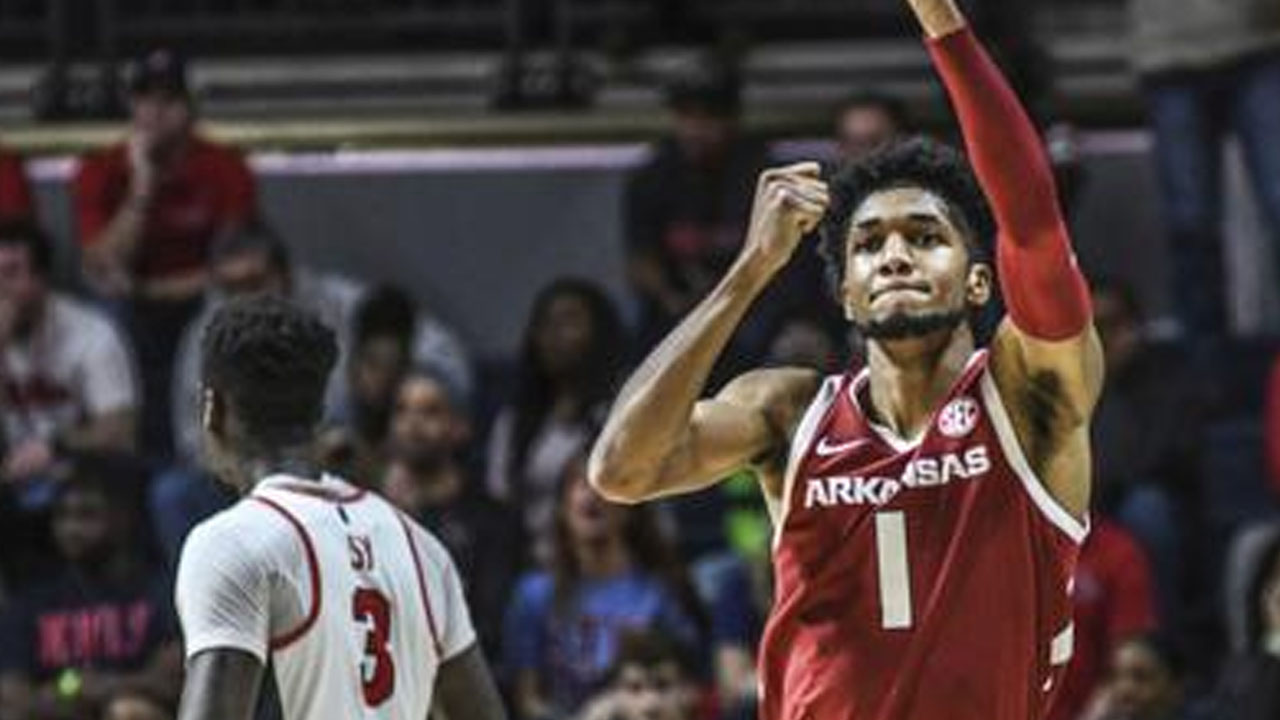 OXFORD, Miss. – Isaiah Joe tied a career high with 34 points and had two steals inside the final 2:20 to lead Arkansas to a 76-72 come-from-behind win at Ole Miss Saturday evening at The Pavilion.

Undaunted by the deficit, Arkansas used a 7-0 run – layup from Adrio Bailey, a 3-pointer from Joe and a jumper from Joe – to get within four points. However, Ole Miss worked its advantage back up to nine on two occasions over the next five minutes. The Rebels’ last significant lead was eight points after two free throws with seven minutes to play.

From that point, Joe sank a 3-pointer with 6:03 left and, after a defensive stop, Joe drilled another triple. On the play, Bailey was fouled and sank both free throws for a 5-point possession to tie the game, 64-64, at the 5:33 mark.

Ole Miss regained a four-point lead with 4:50 left. Joe and Desi Sills each hit jumpers to knot the game for a seventh time with 3:55 remaining. Neither team scored over the next minute until Joe was fouled and sank two free throws.

Joe then came through with his first big steal down the stretch (at 2:20). He converted the steal into a fastbreak layup for a four-point lead. The Rebels cut their deficit in half with an offensive put-back.

Both teams went on another scoring drought until Joe came through with his second steal with 18 seconds left. The Rebels fouled Joe and he sank both free throws to go up four. Breein Tyree quickly made a layup to make the score 74-72 with 18 ticks left on the clock.

Jimmy Whitt Jr., was fouled on the ensuing inbounds play. The graduate senior drained both free throws with eight seconds left to secure the four-point win.

Joe was 11-of-18 from the field, including 7-of-13 from 3-point range, and the sophomore made all five free throws. In addition to his two steals, Joe tied a career-high two blocked shots – tying the total he had versus Ole Miss last season.

Mason Jones finished with 13 points, thanks to going 6-of-6 at the line, and career-high nine assists with three steals. Whitt had 11 points. going 7-of-8 from the free throw line.

Arkansas returns home for two games, hosting Vanderbilt on Wednesday (Jan. 15) and Kentucky on Saturday (Jan. 18). The Vanderbilt game is set for a 7:30 pm start on the SEC Network. The sold-out Kentucky game is set to begin at 3:00 pm and will be televised on ESPN.