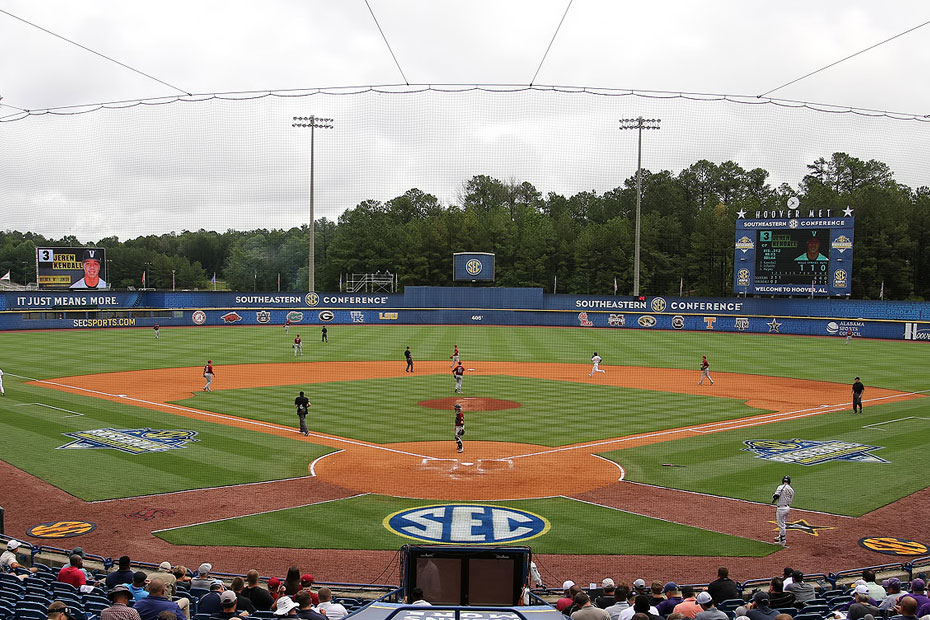 HOOVER, Ala. — The 13th-ranked Arkansas Razorbacks will finally get to play their opening game as the No. 4 seed in the second round of the 2017 SEC Tournament Thursday morning against the No. 5 seed Mississippi State. First pitch is slated for 9:30 a.m. on the SEC Network. After other tournament games from earlier in the week were delayed because of weather, the Hogs were able to get an extra day of rest and will face the Bulldogs, who beat Georgia in an elimination game on Wednesday.

The second, third and quarterfinal rounds are double elimination, while the semifinals and the championship game are single elimination. The tournament bracket can be found here.

Arkansas comes into the tournament as winners of four of their last six games, including series wins over Vanderbilt and Texas A&M. The Hogs finished conference play with an 18-11 record to earn a top-four seed and a first-round bye. It’s an 11-game turnaround in SEC play from a year ago that saw the Hogs finish last in the conference and not qualify for postseason play.

Arkansas won six of its 10 conference series this year, including a sweep of Mississippi State to kick off conference play. In those six series wins, the Razorbacks went 14-4 and hit .298 as a team with 27 home runs and 109 runs scored.

Sophomore Eric Cole led all Hog hitters over that span with a .367 average (18-of-49) with four doubles and a .456 on-base percentage. Jax Biggers, Luke Bonfield, Dominic Fletcher, Chad Spanberger, and Carson Shaddy all hit over .300 during the same span, combining for 22 home runs and 75 RBIs.

The Razorbacks are 28-37 all-time in the SEC Tournament and 3-1 against Mississippi State in tournament games. Thursday will be the first time the two programs have faced in the conference tournament since 2012.

Follow Live
Games one through 16 of the SEC Tournament are available on the SEC Network and SEC Network+ via the WatchESPN app. The championship game will be aired on ESPN2. As always, the Razorbacks can be heard on the Razorback Sports Network on the radio with Phil Elson on the call.

No. 4 Arkansas vs. No. 5 Mississippi State | WATCH SEC NETWORK

Trevor Stephan – Man On Fire
Junior Trevor Stephan had a stellar regular season in his first full year as a starter at Arkansas. The Magnolia, Texas native has made 14 starts for the Razorbacks, throwing 77.2 innings of action, while just walking 15 batters. Since his start against LSU on April 8, Stephan has pitched at least six innings in five of seven starts, including three straight starts of seven innings or more. On May 6, Stephan threw a one-hitter against Tennessee in a complete seven-inning game, earning SEC and NCBWA National Pitcher of the Week honors.


Chad Spanberger – Here For The Long Ball
Junior Chad Spanberger has hit 14 home runs on the year, 11 coming in conference play. In the last three games, Spanberger has hit four homers, including two in the regular season finale against Texas A&M. Arkansas is 10-3 in games where Spanberger hits one out of the park. After hitting .225 and .252 in his freshman and sophomore years, It was a particularly good season for the Granite City, Illinois native, who is hitting .294 on the season and .304 in conference play. Coming into the tournament, Spanberger led all SEC players with 36 RBIs in league games.

All Conference Honors
Three Razorback baserball players had their season performance recognized prior to the SEC Tournament as Grant Koch, Jax Biggers, and Dominic Fletcher each were named to all-conference teams on Monday. Koch leads the trio as a First Team All-SEC catcher, while Biggers was named as a Second Team All-SEC shortstop. Fletcher is part of the SEC All-Freshman Team in the outfield.

Koch is only the second Razorback catcher to be named an All-SEC player in program history and first since Jake Wise in 2014. As for Biggers, he’s the seventh infielder to make the first or second team with Dave Van Horn as the head coach and first primary shortstop since Scott Hode made the second team in 2004. Fletcher is the third player to make the all-freshman team in the last four seasons.