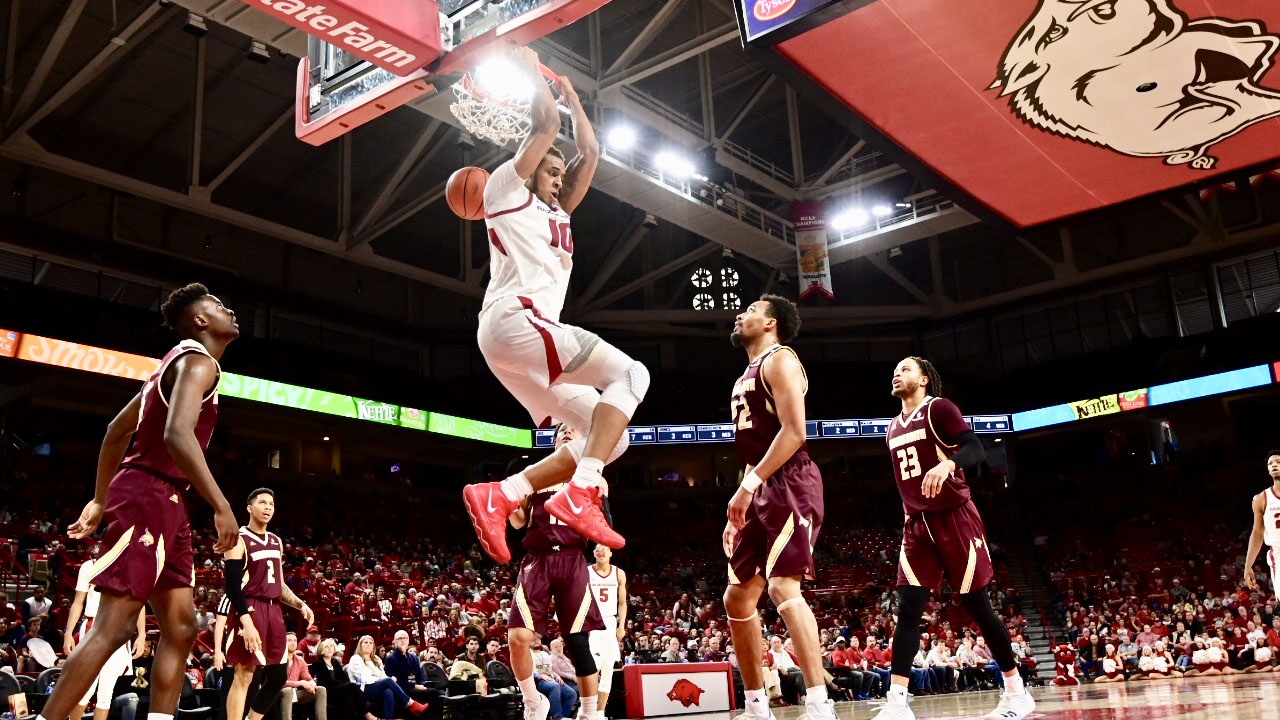 Arkansas Gets 73-70 Win Over Texas State

FAYETTEVILLE – Mason Jones tied his career-high with 21 points while Daniel Gafford recorded his fifth double-double, getting 19 points and 10 rebounds, to lead the Razorbacks (8-3) to a 73-70 victory over Texas State (10-2) Saturday afternoon at Bud Walton Arena.

It marked the second straight game Jones has led the team in both scoring and assists, finishing with four helpers. Jones additionally had a career-high three steals and scored 10 of his 21 points at the free throw line. Gabe Osabuohien also had four assists, which is a career high. Isaiah Joe, who was 7-of-8 at the free throw line, and Jalen Harris each scored 10 points.

The Bobcats opened the game by taking a 19-3 lead. The Razorbacks held Texas State scoreless for the next 5:20 during on a 17-0 run. Gafford had a dunk and free throw to tie the game, 19-19, and Osabuohien gave Arkansas its first lead, 20-19, with a free throw at the 7:13 mark. Arkansas did not trail the remainder of the game, including a 34-27 lead at halftime.

Texas State would tie the game, 38-38, on a Nijal Pearson 3-pointer with 14:0 left in the game. However, Gafford answered with a dunk to regain the lead and hold on the rest of the way. The Bobcats got to within two, 53-51, before Jones converted an old-fashion 3-point play to go up five with 5:13 left in the game. Including that free throw, Arkansas made 15-of-19 at the free throw line.

Arkansas will close the 2018 calendar year by hosting Austin Peay on Dec. 28 (Fri.) in Bud Walton Arena. Tip-off is set for 7 pm.

SECOND HALF: Arkansas was 20-of-26 at the free throw line in the second half to secure the win.