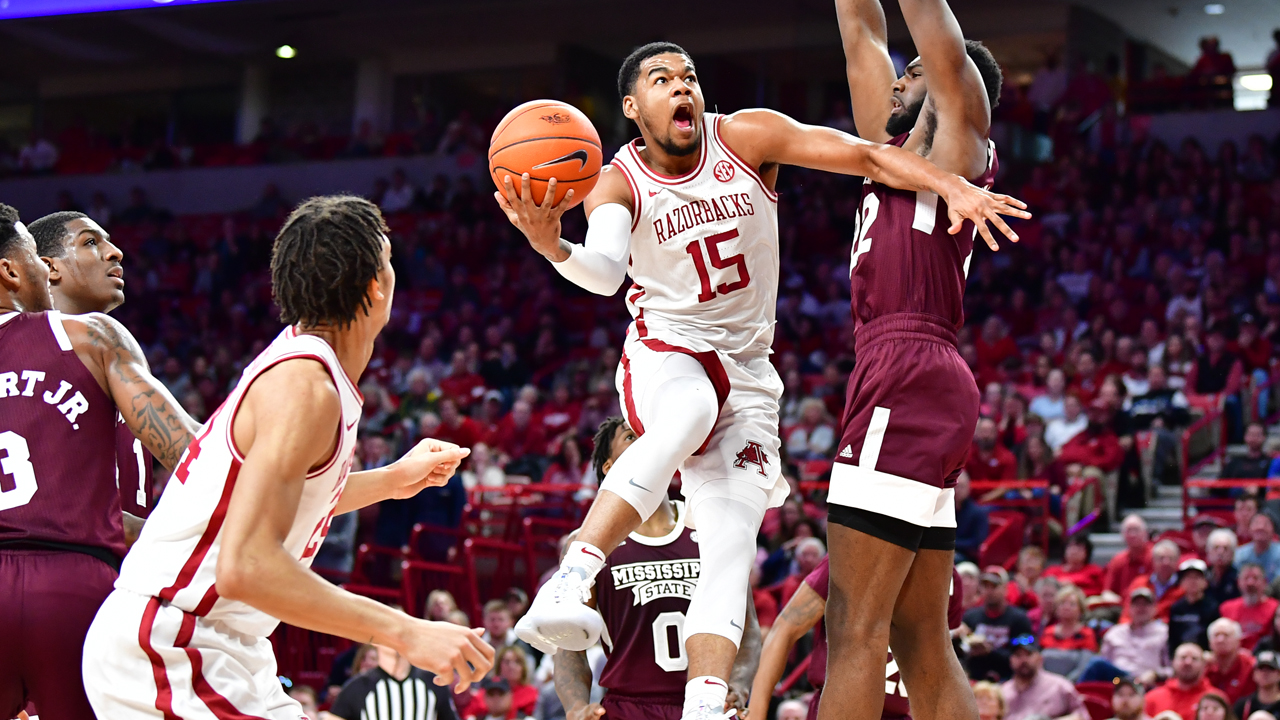 Arkansas Gets Beat at the Buzzer by Mississippi State

FAYETTEVILLE – Arkansas erased a 17-point, second-half deficit – thanks to 38 points by Mason Jones, to take a lead with 1:45 left in the game but Mississippi State’s Abdul Ado tipped in a missed basket with six-tenths of a second left to give the Bulldogs a 78-77 win Saturday afternoon at Bud Walton Arena.

Arkansas was down 17, 56-39, with 14:37 to play. The Razorbacks picked up the defensive intensity and out-scored the Bulldogs 36-16 over the next 14 minutes to lead by three, 75-72, on a Desi Sills 3-pointer. The Bulldogs ran off four straight points to regain the advantage, 76-75, after a steal and fastbreak layup by Tyson Carter. Jones drew a foul with 59 seconds left and sank both attempts to put the Hogs up one, 77-76.

On the ensuing possession, Arkansas got a stop on the defensive end. The Razorbacks could not capitalize, and Mississippi State had the ball with nine seconds remaining. Carter drove the ball to the basket and missed a layup with one second left. Ado came in and tipped the ball in before the buzzer for the one-point win.

Jones produced his sixth 30-point game of the season and, with six rebounds, had his 20th game with at least five boards. He was 18-of-21 at the free throw line. The 18 makes are an Arkansas single-game record in an SEC game while ranking third (tied) overall. The 21 attempts are the second-most by a Razorback in an SEC game behind Corliss Williamson’s 22 in 1995 and ties for fifth-most overall.

Sills added 15 for the Razorbacks and Adrio Bailey had 10.

Carter paced the Bulldogs with 26 points with Reggie Perry adding 17.

Arkansas will play at Florida (Tues – Feb 18) before returning home to host Missouri (Sat.  Feb. 22) and Tennessee (Wed. – Feb. 26). The Florida game will be televised on ESPNU.