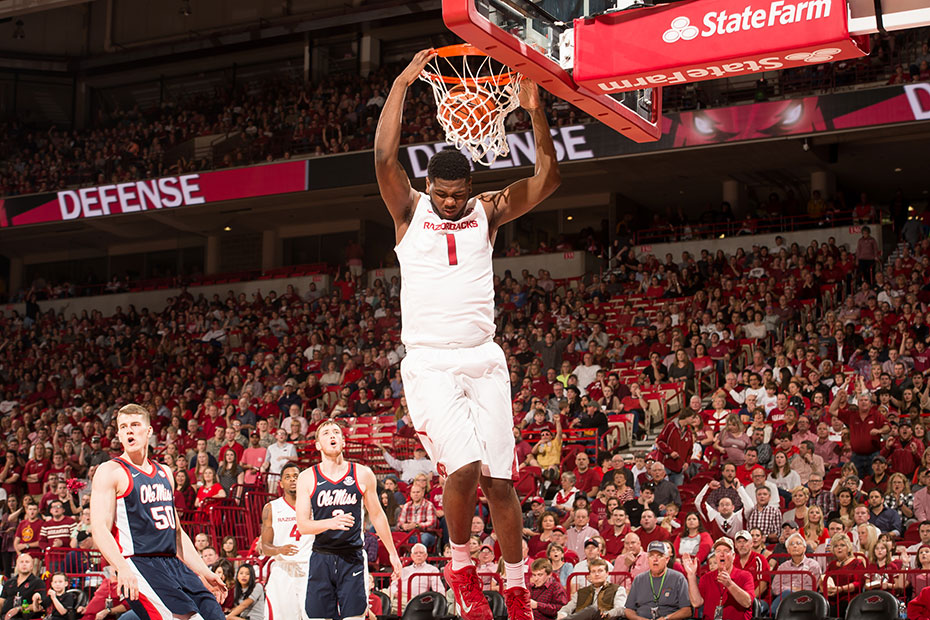 FAYETTEVILLE, Ark. – The Arkansas men’s basketball team will go for its fourth consecutive victory and a season sweep of Texas A&M on Wednesday evening, welcoming the Aggies to town for a 7:30 p.m. tip-off in Bud Walton Arena.

The #Fastest40 Facts
• Arkansas has reached the 20-win plateau for the third time in the last four years.

• Daryl Macon’s SEC Player of the Week is Arkansas’ 11th weekly honor from the league office in the last four seasons.

• Arkansas has recorded eight victories over AP Top 25 teams during the Mike Anderson era, including at least one in five of his six years.

• The Razorbacks have won at least 13 games in Bud Walton Arena in six straight seasons and in 18 of 24 years since it opened in 1994.

• Arkansas is one of four teams in the country with 90-plus wins and 15 or fewer losses at home over the last six seasons. The Razorbacks are 93-15 (.861) at BWA under Anderson.

• The Razorbacks have led by 20-plus points in nine of their 13 victories in Bud Walton Arena this season, including two of the four SEC wins.

• Mike Anderson’s 19 SEC road wins in the last five-plus seasons is five more than Arkansas had in the previous 10 years before he took over.

• The Razorbacks are tied for fourth in the country scoring 70-plus points in 25 games this year. Arkansas is also a perfect 13-0 this season when scoring at least 80 points.

• Arkansas leads the SEC and is 25th in the country with seven games of 20-plus assists this season after recording 20 helpers against Ole Miss (Feb. 18). The Razorbacks are 39-3 in the Mike Anderson era when dishing out 20-plus assists.

A Win Would…
• Give Arkansas two separate four-game winning streaks in SEC play for the first time since the 1997-98 season and just the third time since joining the league in 1991-92.

• Be the 101st victory over Texas A&M in the all-time series, keeping the Aggies winless in Bud Walton Arena.

• Be the ninth straight win against Texas A&M in Fayetteville, including last year’s 74-71 victory when the Aggies were ranked No. 5 in the nation.