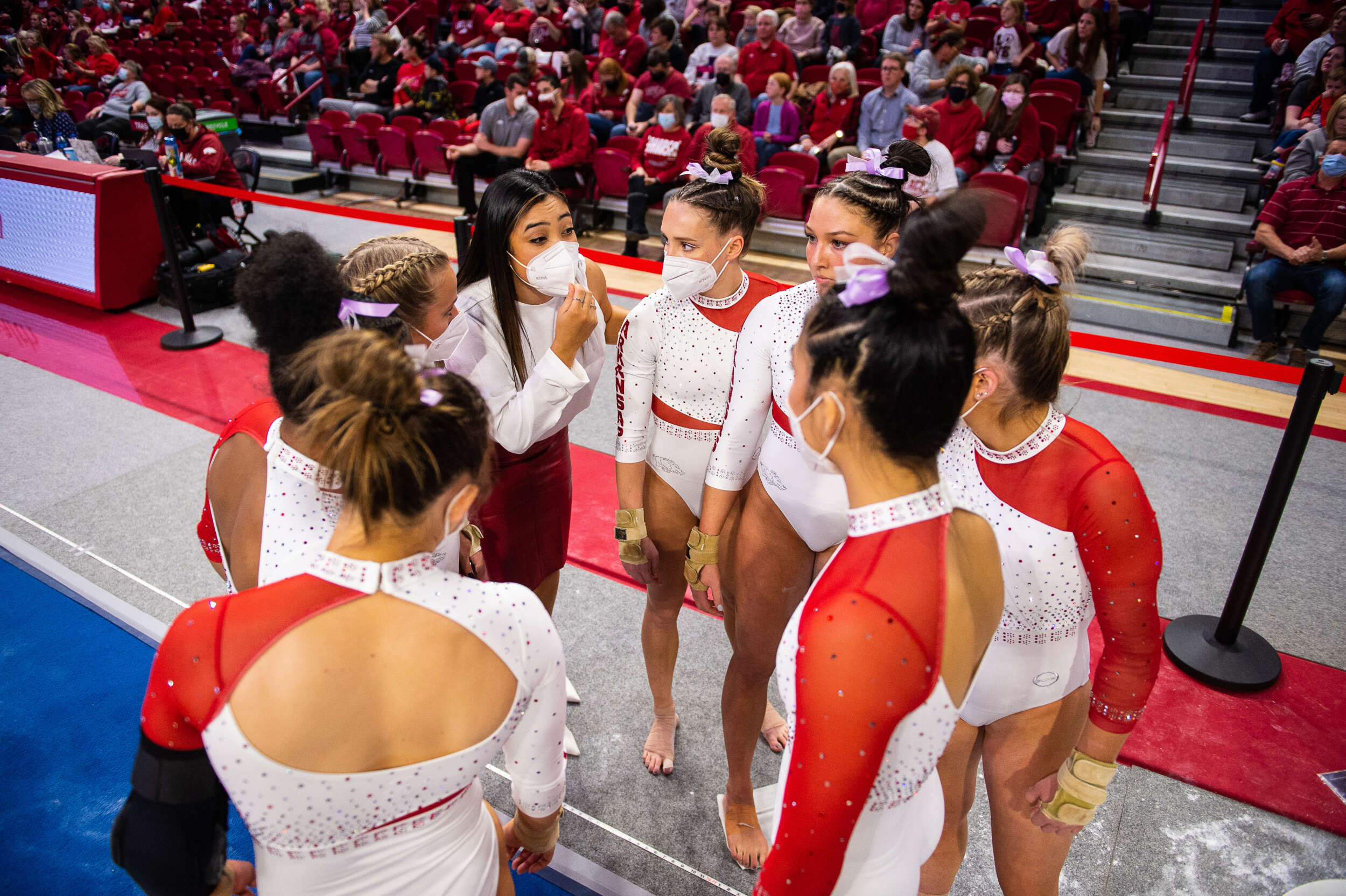 Arkansas Heads to Gainesville for First Road Meet with Florida

The No. 13 Gymbacks return to competition after two weeks and will pay the No. 4 Florida Gators a visit for their second SEC dual of the season on Friday.

Arkansas was sidelined due to health and safety protocols for the team’s Jan. 21 meet at LSU, but get back to action in strong shape.

“Gymnastics is just kind of one of those sports where [if] you take five or six days off, whether you’re a close contact or COVID positive, it takes at least another week to get back to normal, and you really can’t jump back into full routines right away,” head coach Jordyn Wieber said. “So this extra week and having a few extra days over the weekend to get in a healthier place, to allow our athletes to catch up again, has been really, really good and I’m feeling confident about where we are with our lineups and where we are health-wise going into this weekend.”

Florida is Arkansas’ strongest opponent yet this season and is currently ranked No. 4 overall and in the top 10 on all events. The Gymbacks are No. 13 overall and their highest event ranking comes in at No. 9 on vault. Notably, Arkansas’ bars score of 49.550 against Auburn ties Alabama for the highest in the country all season and is second-best in program history.

The Gators are 5-0 so far this season, while the Razorbacks are 1-1. Florida holds the advantage in the series between the two teams with a 47-3 record, and none of the Gymbacks’ wins against the Gators have come in Gainesville.

“Any SEC road meet is always a challenge. The team knows that, the coaching staff knows that. This is our first road meet and it’s going to be a good experience for our young ones to get into a different environment,” Wieber said. “But no matter who we’re competing against, the job is always the same: go out and be the best version of Arkansas gymnastics that we can be, and I’m really excited about where the team is at and what we’re looking toward for the rest of the season so it should be a great weekend.”

In addition to being one of the toughest, Arkansas’ all-time series against Florida is also the team’s longest. Friday’s meeting between the two will be the 51st ever.

The meet is set for 7:30 p.m. and will be broadcast live on SEC Network, with live stats provided by Florida.

Arkansas’ last meet was one to remember as the Gymbacks competed inside Bud Walton Arena for the first time. A whopping 10,345 fans watched the show and shattered the program attendance record, which was previously set on Jan. 17, 2020, the first home meet of the Wieber era.

The competition was a fierce one, and while Arkansas fell to Auburn, it was an incredibly close finish of 197.250 to 197.200. The Gymbacks had never hit 197 in the first two weeks of the season prior, and the score is the sixth-highest in program history. Senior Kennedy Hambrick won her second all-around title in as many weeks with a score of 39.525 and also took the title on beam with a 9.950. Graduate student Maggie O’Hara scored a 9.950 on bars to share the title with Auburn freshman and Tokyo 2020 all-around champion Suni Lee, and senior Amanda Elswick posted a 9.900 on vault for the crown.

Following the road trip to Gainesville, the Gymbacks return home for back-to-back meets in Barnhill Arena on Feb. 4 and Feb. 11 against West Virginia and Kentucky, respectively. Feb. 4 will serve as Equality Night and Feb. 11 will once again celebrate Women’s Empowerment, an annual tradition that began in Wieber’s first season at the helm. Both meets are set for 6:45 p.m.