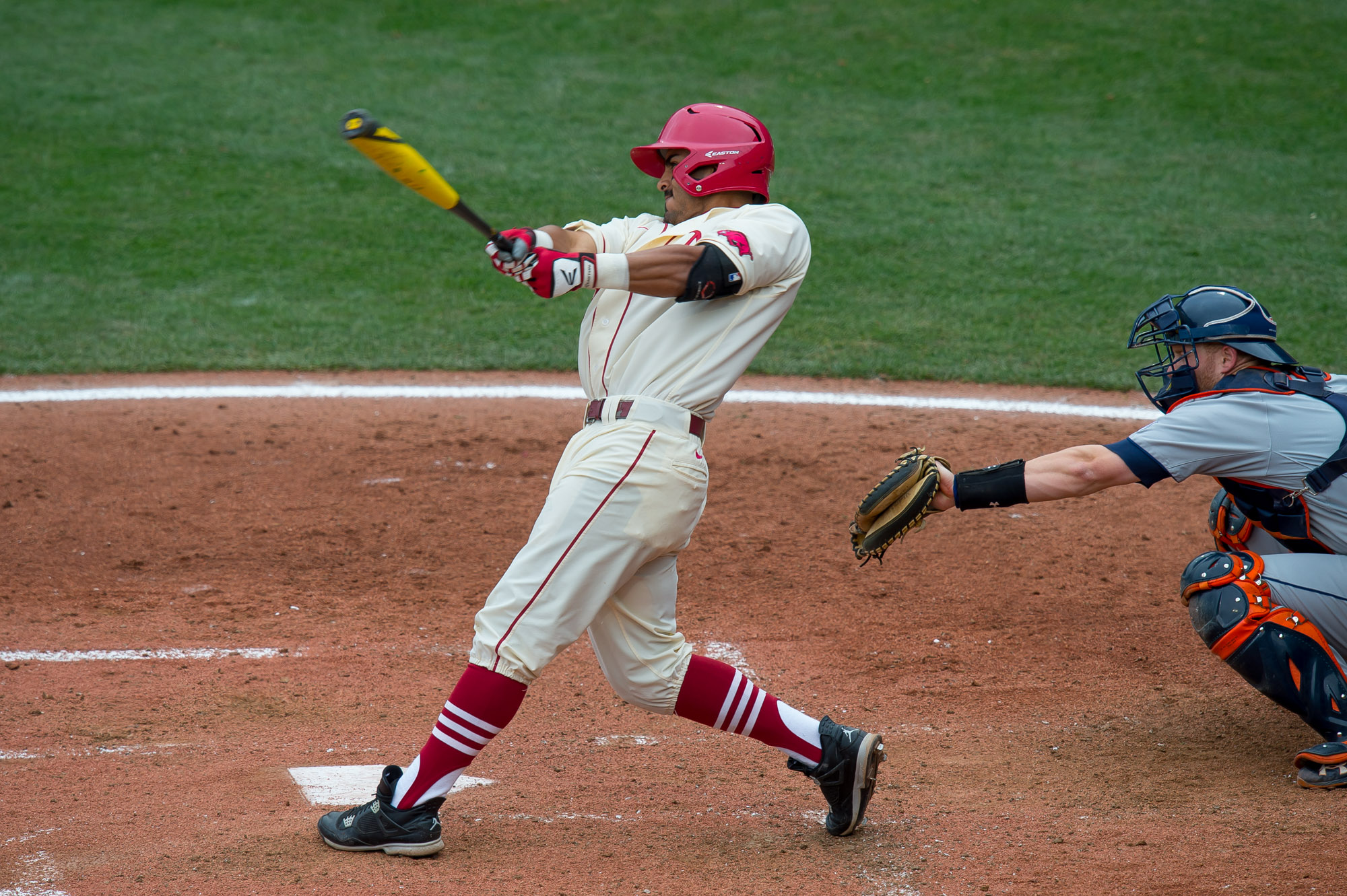 FAYETTEVILLE, Ark. – After winning its fifth home conference series in a row dating back to last season, No. 15 Arkansas baseball is looking to continue that winning trend in the friendly confines of Baum Stadium this weekend as it plays host to Missouri for a three-game series starting on Friday.

The Hogs are coming off a three-game sweep of Auburn at home last weekend, but suffered a tough one-run loss (5-4) at the hands of No. 16 Oklahoma State in Stillwater, Okla., on Tuesday, falling to 18-7 on the season.

Nonetheless, Arkansas is still feeling good after its weekend against Auburn, hitting .294 as a team with four home runs and 20 runs scored. All four of those home runs came in the big 14-7 win on Saturday, which clinched the series, and set a new team-high for home runs in a game this season.

Two of those home runs came off the bat of senior Michael Bernal, his second multi-home run game of the season and has been hot as of late, hitting .429 with eight RBI, three extra-base hits and two walks over his last four games. Currently, Bernal is batting .276 with a team-leading six home runs and 27 RBI.

Arkansas head coach Dave Van Horn will go with the same rotation that was seen last week as Dominic Taccolini will take the mound on Friday for his seventh consecutive start this year. Taccolini wasn’t part of the decision last week against Auburn, going just two innings and giving up two earned runs on six hits.

Taccolini is still one of Arkansas’s best in terms of control. The Houston-native has only walked nine batters this year, a staff-low among all weekend starters on the Arkansas roster and has struck out a team-high 28.

Sophomore Keaton McKinney will get the nod on Saturday, followed by freshman Barrett Loseke on Sunday. McKinney had his best outing of the year last week against Auburn, going six innings strong, allowing no runs with three hits, but walking a career-high nine batters.

Friday’s game will be the second of five “Friday Night Shirsey Nights.” The first 2,000 fans at Baum Stadium for Friday night’s between the Missouri Tigers and Arkansas Razorbacks will receive a James McCann Shirsey. The five limited edition Shirseys will be different for each game and will include greats throughout Arkansas baseball history. Shirsey designs will be released the Monday of each SEC Friday night home game.

Follow Live
Fans can catch the entire series on SEC Network+ and the WatchESPN app with Alex Perlman (PXP) and Troy Eklund (Analyst) on the call. Saturday and Sunday’s games will be on the SEC Network as Alex (PXP) and Gabe Gross (Analyst) will call the action.

Also, all three games of this weekend’s series can be heard on the radio via the Razorbacks Sports Network from IMG with Phil Elson (PXP) and Rick Schaeffer (Analyst) on the airwaves.

– No. 15 Arkansas looks to claim its second conference series in as many weeks starting Friday as it takes on cross-division and cross-border rival Missouri for a three-game series. Friday’s game at 6:30 p.m. will be televised online on SEC Network+. Saturday and Sunday’s games will both be on the SEC Network.

– Senior shortstop Michael Bernal had another week to remember against Auburn as he hit well over .400 in 11 at-bats with two homers and plating seven RBI. Both homers came in Saturday’s series clincher, marking the second game that Bernal has had multi-home runs.Bernal last hit two home runs against No. 9 Houston back at the Houston College Classic.

– Arkansas’s bullpen, which struggled against South Carolina, flipped the switch on Auburn combining for a 3.33 ERA, which is a near five-run improvement from the week before (8.62) as the hurlers struck out 25 batters and gave up just 10 earned runs over the course of three games.

– Sophomore right-hander Keaton McKinney was the only Hog starting pitcher to come away with a quality start, going six innings strong on Saturday, earning his first win and first decision of the year. McKinney gave up no runs on three hits with three strikeouts. Even though he walked five batters, McKinney was able to get the big pitches and hold his opponent to a season-low three hits.

– Last week, McKinney was the only starting pitcher in the SEC to go six or more innings, give up three or less hits and pick up the win for his team.

– Arkansas has put up quite the big run total when McKinney starts on the hill. In six starts, the Hogs have put up 53 runs (8.8 per game) when McKinney makes a start, the most out of any Arkansas starting pitcher by almost 20 runs.

– The sweep of Auburn last weekend was Arkansas’s first sweep of a conference opponent at home since taking three-straight from Alabama in the 2012 season.

– The Hogs currently rank 12th in the nation in fielding percentage (.980), which is good for third in the conference. With only one error made through the first six games of conference play, Arkansas has the best fielding team in conference play alone and is third overall in double plays turned this season (24).

– The power has been there from the beginning and it doesn’t seem to be going away anytime soon for the Hog offense. As a team, Arkansas is hitting .287 with 46 doubles, six triples and 29 home runs. Those 81 extra base hits make up nearly 35 percent of the Razorbacks’ entire hit total for 2016. The 29 home runs is already the second-highest total in the last four seasons. Arkansas hit 53 long balls as a team last year.

– Carson Shaddy or “Mr. Consistent” has been nothing but consistent at the plate since the season started. Last week, Shaddy picked up two more two-hit games, giving him a team-leading 12 multi-hit games this season. Shaddy hasn’t had a home run since March 4 against Eastern Illinois, but has hit four doubles and notched 11 RBI over his last eight games. Currently, Shaddy is leading the team with a .398 average with 35 hits, 20 runs scored, 24 RBI and slugging .614.

The all-time series with Arkansas and Missouri goes back to 1960, but the two clubs have only faced for one three-game series in 2014 since the Tigers joined the SEC after the 2012 season. Arkansas owns a 7-2 record over Missouri in games played in Fayetteville.

Arkansas has a nine-game winning streak against Missouri heading into this weekend’s series, with one being in an NCAA Tournament Regional back in 2004, hosted at Baum Stadium.