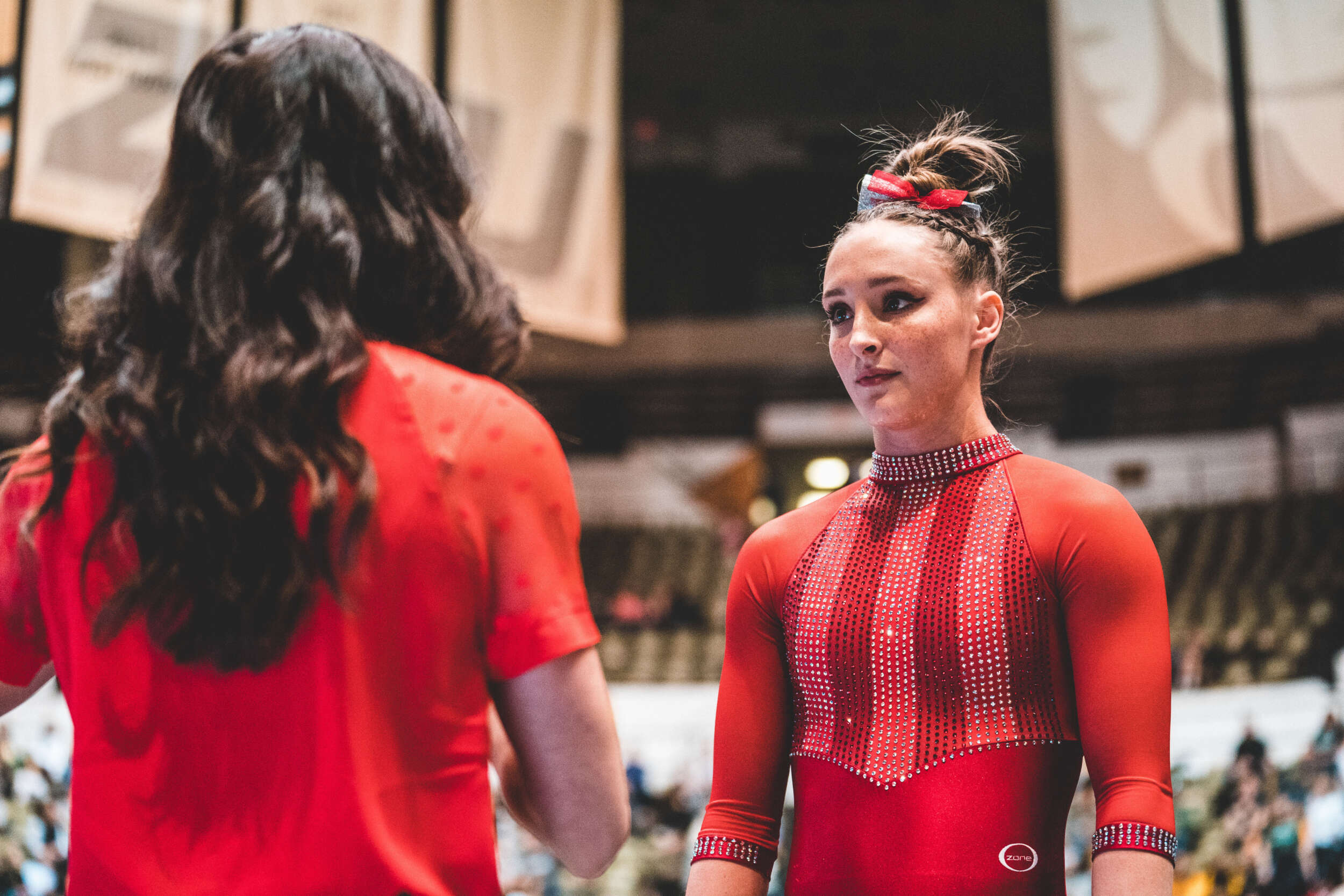 The No. 16 Gymbacks competed in their second road meet of the season on Saturday and also set a new season road high with a final score of 196.800 against No. 11 Missouri and No. 5 LSU.

While both sets of Tigers came out ahead of the Hogs, Arkansas still outscored its season average of 196.370 by nearly half a point. The Hogs also posted a 49+ on all events for the third time this season and their second-highest event scores on bars (49.350) and beam (49.325).

Arkansas’ freshmen and veterans again proved to be big players for the team. Senior Bailey Lovett got the Hogs off to a good start on floor with a 9.900 to tie for second place, and rookie Makie Sedlacek followed with a 9.900 on vault in the second rotation for a new career high and third place.

Freshman Maddie Jones continues to excel week to week and posted a 9.925 on bars for a new personal best, second place and her second top three finish in two weeks. Senior Amanda Elswick rounded out the podium finishes for Arkansas with a 9.925 to take second as the anchor on beam.

Floor
The Gymbacks started on floor for the first time this season and gained momentum as the rotation wore on. Jones and senior Kennedy Hambrick posted back-to-back 9.825s to lay a solid foundation for Arkansas, and Lovett took the floor fifth with a big routine. Each pass was completed with ease and she scored a 9.900 for Arkansas’ highest score of the day and her third 9.9+ this season. The Gymbacks finished with a 49.075 on floor, making it 38 straight meets with a 49+ on the event.

Vault
Arkansas’ vault rotation started with two clean Yurchenko fulls from Emma Kelley and Savannah Pennese and they lit the fire for the rest of the lineup. Leah Smith nailed a solid 9.850 to match her career high and pace the Gymbacks halfway through, and Sedlacek stepped up in the fifth spot. Her Yurchenko 1.5 was stuck and left no doubt for a big score for the Gymbacks. Her 9.900 is a new career high and Arkansas’ highest rookie vault mark this season. The Razorbacks posted a final of 49.050 on vault.

Bars
The Hogs headed to bars looking for redemption after a tough outing on the event against Kentucky last week and did just that. Sophomore Jensen Scalzo posted her third score of 9.9+ this season with a 9.900 in the second spot and cleanly stuck her double layout dismount. Jones followed with a huge 9.925, a new career high and the highest bars score by an Arkansas freshman this season, also capped off with a stuck double lay. Super seniors Sarah Shaffer and Maggie O’Hara added a 9.900 and 9.800, respectively, for a total of 49.350 for Arkansas, which outpaced Mizzou’s 49.275 on the day and was just short of LSU’s 49.375.

Beam
Arkansas closed the meet on beam and similar to bars, was looking for a big comeback from its last time out. Freshman Kalyxta Gamiao set the tone nicely and executed her double layout stepout series and side somi skills with the grace of a veteran. She scored a 9.875 for a new career high to bring up O’Hara, who made her beam debut on the season. From there on out, Arkansas scored no less than a 9.800 and saved its top two routines for last. Hambrick floated through all of her acro skills and stuck her gainer full dismount for a 9.900, and Elswick was next to anchor. Showing all grace under pressure, she easily nailed each skill and finished with Arkansas’ highest score on the event for the day, a 9.925. The Gymbacks posted a 49.325 on beam, their second-highest score of the season and a marked improvement from last week’s 48.500.

Up Next
With just four meets remaining in the regular season, the Gymbacks return home one last time on Friday, Feb. 25, when they host Georgia for Senior Night at 7:45 p.m. at Barnhill Arena. The meet is set to be broadcast live on SEC Network.