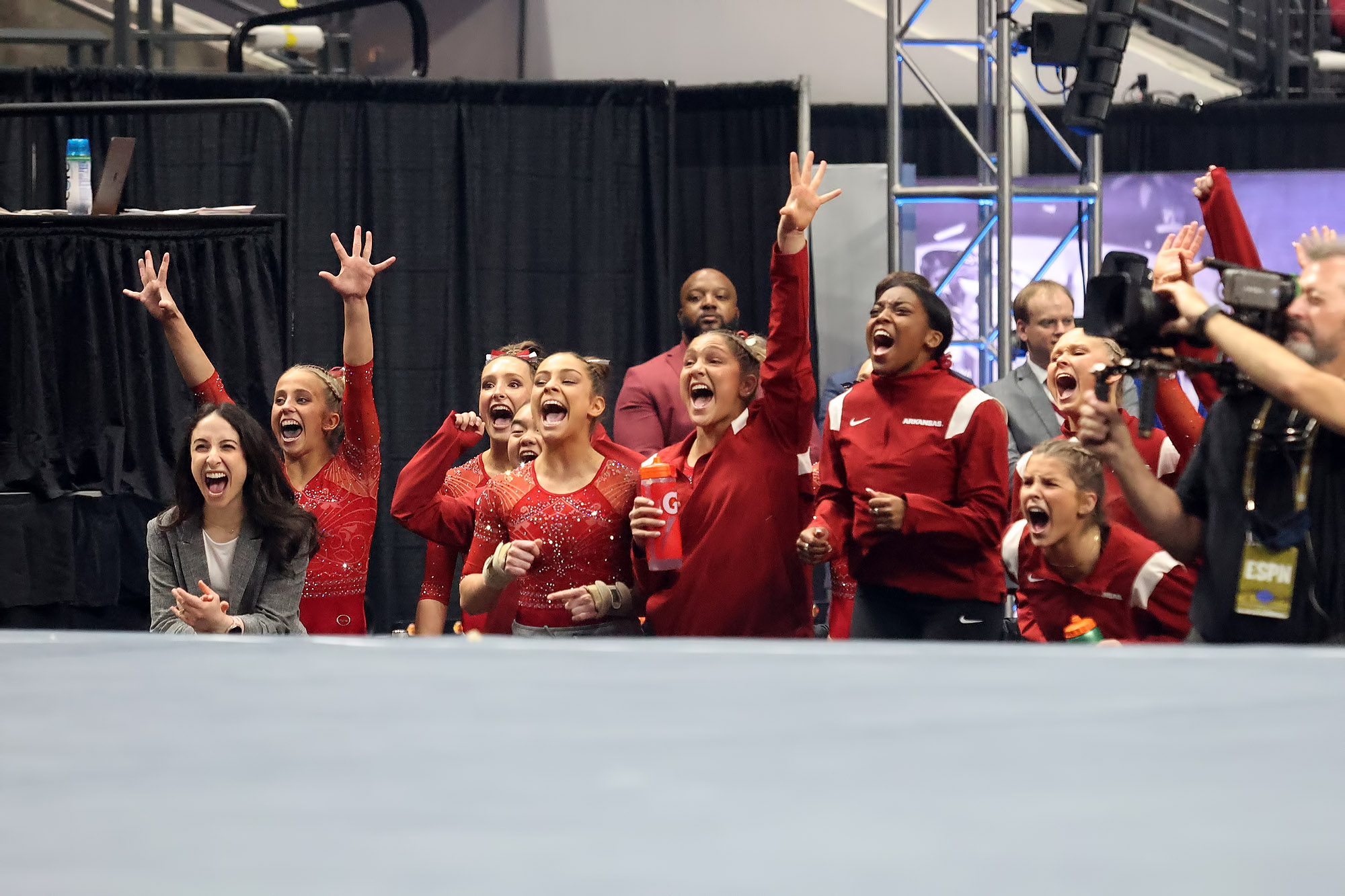 The Hogs headed into the SEC Championships in Birmingham on Saturday seeking redemption from a last-place finish in 2021 and they got it. Arkansas placed second in the afternoon session and came in sixth overall with a final score of 196.450.

The team’s finish is its best since 2019, and 196.425 is the highest at SECs in head coach Jordyn Wieber’s tenure. The score is now the third-best ever in program history at SECs.

The Hogs also registered top-five program SEC Championships event scores on all but beam and matched their best-ever on bars with a 49.150, previously done in 2004 and 2018. Their 49.250 on vault is now tied for the second-best ever with a matching mark in 2015.

Graduate student Sarah Shaffer posted Arkansas’ best individual finish with a 9.875 on vault, which was good for a share of eighth place and tied for the fifth-best vault score in Arkansas’ SEC history. Senior Kennedy Hambrick tied Auburn freshman and Tokyo 2020 all-around gold medalist Suni Lee for ninth place in the all-around with a 39.275. Hambrick’s score also takes over for 10th-best by a Gymback in the all-around at SEC Championships.

Floor
The Hogs started the day on floor and had two solid routines from junior Madison Hickey and freshman Maddie Jones for scores of 9.825 and 9.875 to get Arkansas going. Shaffer stepped up for her last-ever floor routine at an SEC Championship and earned a season-high 9.875 to keep the momentum for Arkansas. Hambrick and Bailey Lovett added 9.800 and 9.850 scores, respectively, to close the rotation with no counted scores lower than a 9.800. Arkansas finished floor with a total of 49.225.

Vault
Coming off a program-best vault score last time out, the Hogs kept the fire going and delivered another excellent rotation on the event on Saturday. Senior Savannah Pennese and freshman Leah Smith posted matching 9.850 Yurchenko fulls in the second and third spots, and Shaffer delivered a huge Yurchenko half next for a team-high 9.875. Senior Amanda Elswick came up in the fifth spot and added another 9.850 on a Yurchenko full, and Hambrick closed out the lineup with a matching score on her Yurchenko 1.5. The Gymbacks’ 49.250 on vault was the best mark of the session and matched their third-highest score of the season.

Bars
Arkansas continued to make improvements on bars, one of its more challenging events in the regular season and ended up tying Missouri for the top score of the session with a 49.150. Smith and sophomore Jensen Scalzo led the way with scores of 9.825 and 9.800 to start. Shaffer propelled the Hogs further with another 9.825, and Hambrick and graduate student Maggie O’Hara added a pair of 9.850s in the fifth and sixth spots to ensure another good event score as Arkansas approached its fourth and final rotation.

Beam
Each of the teams before Arkansas had falls on beam, and while the Gymbacks didn’t meet the same fate, they did have some trouble on the event. Junior Kiara Gianfagna got Arkansas back on track in the third spot after a couple of low scores with a 9.825, as she cruised through her series and stuck her round-off 1.5 dismount. Hambrick had a clean routine in the fifth spot for a 9.800, and Elswick showed her confidence in the anchor spot with smooth acro and a solid dismount for a 9.875 score. The Hogs closed the rotation with a 48.825 total.

Up Next
The team will learn their regional destination during the NCAA Selection Show on Tuesday, March 22. Regionals will run from March 30-April 2. Regional semifinals will take place on Thursday, March 31 with the top two teams from each of two four-team sessions advancing to Saturday’s regional final. Auburn, Oklahoma, NC State and Washington will all serve as regional hosts. The Gymbacks have appeared in 17-straight regionals and have only missed twice in program history: in the team’’s inaugural 2003 season and when the event was canceled in 2020 due to COVID-19 protocols.