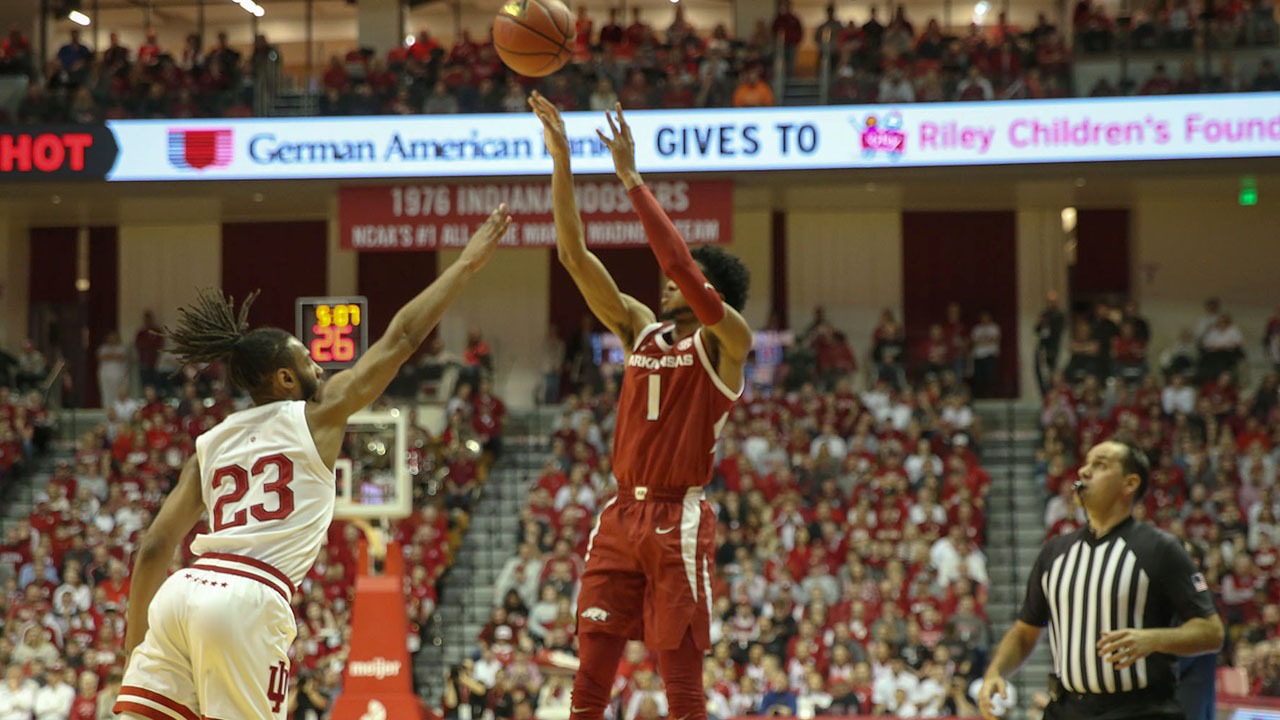 Arkansas Rallies on the Road to Beat Indiana

BLOOMINGTON, Ind. – Arkansas – down by as many as 11 in the second half and by one (62-61) with 3:17 left in the game – got back-to-back 3-pointers from Mason Jones and Isaiah Joe made four free throws down the stretch to cap a 19-3 run and secure a 71-64 victory at Indiana Sunday night at Assembly Hall.

Joe, who made three 3-pointers to cut the Razorback deficit from 11 to two with 13:27 left, finished with 24 points. Jones had 21 with six rebounds and a season-high six assists. This was the third straight game Joe and Jones each scored at least 20 points.

Arkansas improves to 11-1 for the season and 1-7 when playing on the road versus a Big Ten opponent. Indiana falls to 11-2. Arkansas also takes the rubber match in the series. The teams were 2-2 all time prior to tonight and both teams won on their home courts last season. (Arkansas won 73-72 in game three of 2018-19 and Indiana won 63-60 in the 2019 NIT game in Bloomington.)

The Razorbacks began its stretch run as Jones scored four straight, Desi Sills hit a 3-pointer in the right corner and Joe hit a turnaround jumper in the lane to tie the game, 61-61, with 4:58 left.

Indiana regained the advantage when Amaan Franklin went 1-of-2 at the free throw line. But that is the last time the Hoosiers would lead over the final three minutes. Jones immediately sank back-to-back 3-pointers (3:17 and 2:04) for a five-point cushion.

Neither team would score over the next two minutes. Indiana was forced to commit three straight fouls to put Arkansas in the bonus. Joe hit two free throws with 28 seconds left to put the Hogs up seven. Franklin followed with a jumper in the lane for the Hoosiers before Joe made two more at the charity stripe to provide the 71-64 final.

Arkansas returns home to open SEC play as the Razorbacks host Texas A&M on Jan. 4 (Saturday). The game, set for 6 pm, is sold out and will be broadcast on the SEC Network.

SECOND HALF: Arkansas closes game on 19-3 run to pull out win.