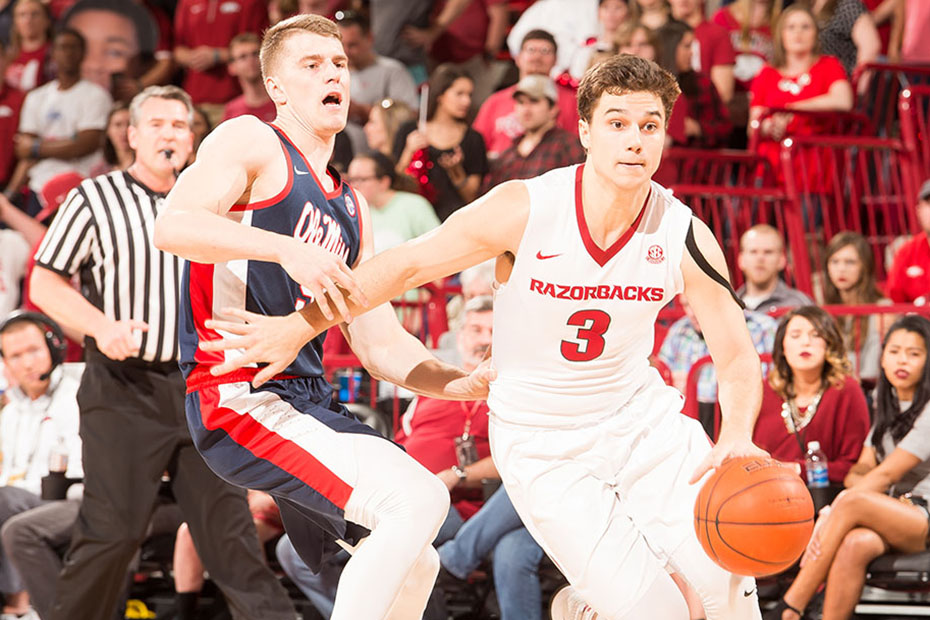 FAYETTEVILLE, Ark. – The No. 3 seed Arkansas men’s basketball team will make its 26th SEC Tournament appearance Friday evening, taking on No. 6 seed Ole Miss in the quarterfinal round at 8:30 p.m. on SEC Network.

Who We’ll Play
• The Razorbacks will face Ole Miss for the first time ever in the SEC Tournament after the Rebels defeated Missouri 86-74 on Thursday evening in the second round.

The #Fastest40 Facts
• After being picked to finish fifth in the SEC by the media, Arkansas finished higher than it was selected for the fourth straight season.

• Arkansas joins Kentucky as the only schools to finish in the top three of the SEC in two of the last three years.

• Arkansas enters postseason play having won six of its final seven regular season games for the second time in the last 11 seasons.

• During the last four years, the Razorbacks have posted a 29-13 regular season record in the months of February and March.

• Arkansas has recorded eight victories over AP Top 25 teams during the Mike Anderson era, including at least one in five of his six years.

• The Razorbacks have scored 80-plus points in five of their last seven wins, and are 15-0 this season when scoring at least 80 points.

• The Razorbacks are looking to make two NCAA Tournament appearances in a three-year span for the first time in nine seasons.

SEC Tournament Notes
• Arkansas is the No. 3 seed for the fifth time since joining the SEC, having advanced to the championship game two of the previous four times.

• The Razorbacks won their only SEC Tournament championship in 2000 as the No. 3 seed, defeating Georgia, Kentucky, LSU and Auburn to capture the title.

• The Razorbacks are making their 26th SEC Tournament appearance where it has an all-time record of 22-24, including a berth in the title game in 2015.

• Arkansas is 2-5 in the SEC Tournament since the league went away from divisions after the 2010-11 season, with both victories coming in 2015.