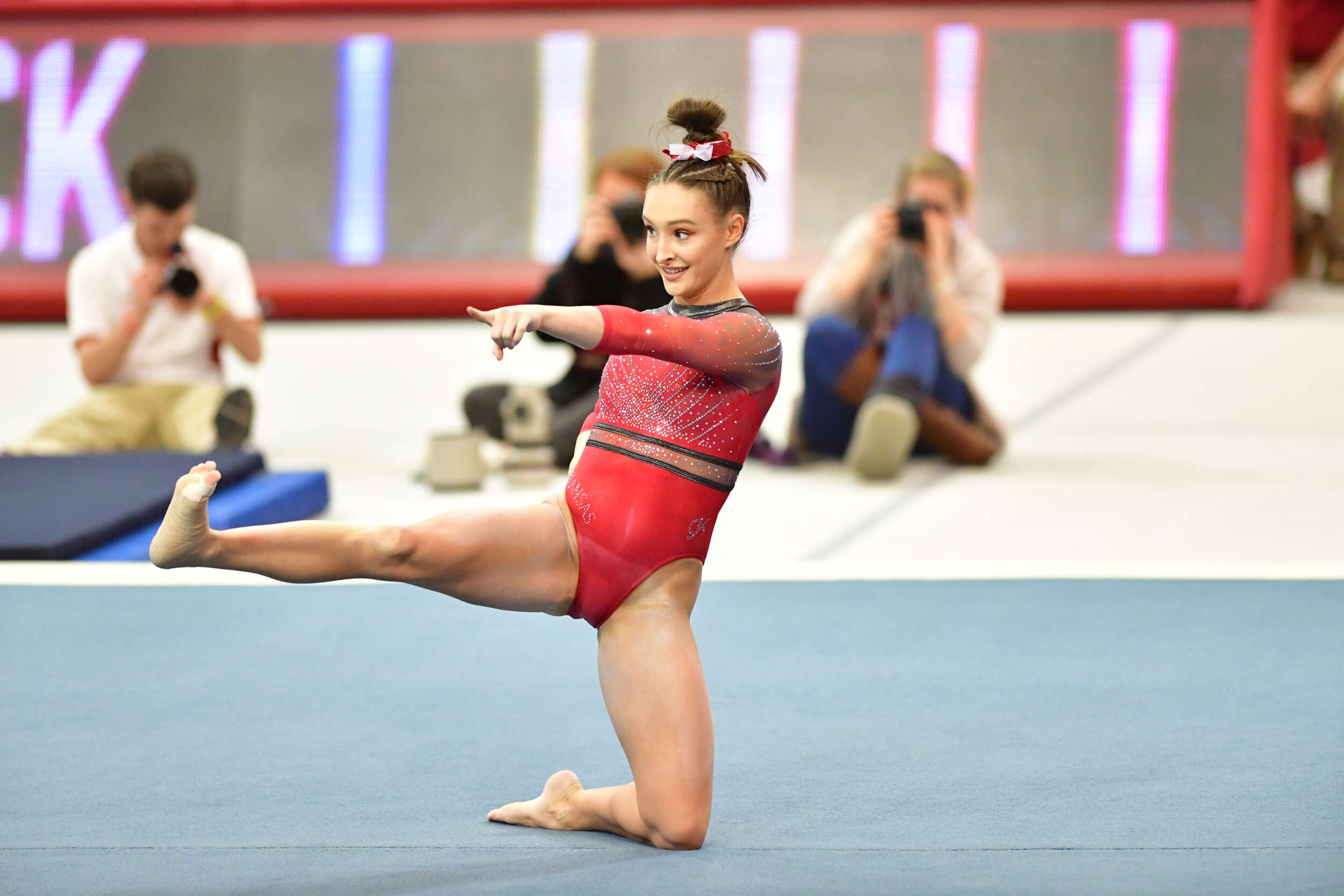 Arkansas Sets the Bar High in Win Over Georgia

Sophomore Kennedy Hambrick’s fire continues to burn as she took home the bars, beam and all-around title. Hambrick set career highs to earn those titles, scoring a 9.950 on bars, a 9.925 on the beam and a 39.600 all-around. Her 9.925 on the floor ties her career-high, earning the top score for the third straight meet.

Arkansas was off to a steady start as all Gymbacks hit their marks, two of which scored a 9.800 or higher including Hambrick and sophomore Amanda Elswick who returned to action for the first time tonight. Elswick wasted no time wowing the judges, taking home the vault title in her first appearance of 2020 with a score of 9.875.

All six routines scored 9.800 or higher on the bars tonight, starting with senior Jessica Yamzon who led off with a solid 9.825. Yamzon finished the night with an all-around score of 39.075. Four straight 9.8s for Arkansas led to Hambrick, whose flawless handstands and full-twisting double-back earned her a 10.00 from one judge. With the fifth best bars score in Arkansas history (49.275), the Gymbacks had taken the lead after the second rotation, 98.275 – 98.800.

Four competitors, two from each squad, shared the beam title tonight. Gymbacks’ Hambrick and Carter scored a 9.925 each, sticking both their dismounts, Hambrick’s cartwheel gainer full and Carter’s side aerial-full. The beam title is the first for Hambrick this season, third of her career and veteran Carter earned her ninth career beam title with the stellar performance. Georgia outscored Arkansas on the event 49.400- 49.275, but the Razorbacks held onto their lead through three rotations, 147.550 – 147.350.

The Gymbacks looked to the fourth rotation to solidify the win and did just that. Scoring 49+ for the seventeenth consecutive meet, Arkansas was led by Hambrick again, joined by redshirt-freshman Bailey Lovett. The duo each scored a 9.925 on the floor, giving the Gymbacks the punch they needed to beat Georgia. Lovett’s sky-high double-layout earned her the 9.9+ score for the third straight meet.

Friday’s 196.950 is not just the highest of the season for Arkansas but the 13th highest in program history and just the fourth time since the start of Arkansas gymnastics that the Gymbacks had a combined score of 148 or higher on the bars, beam and floor. It also marks the second time in Arkansas history that the Razorbacks scored a 49.400 or higher on the floor three times in the same season… and there’s still six meets left.