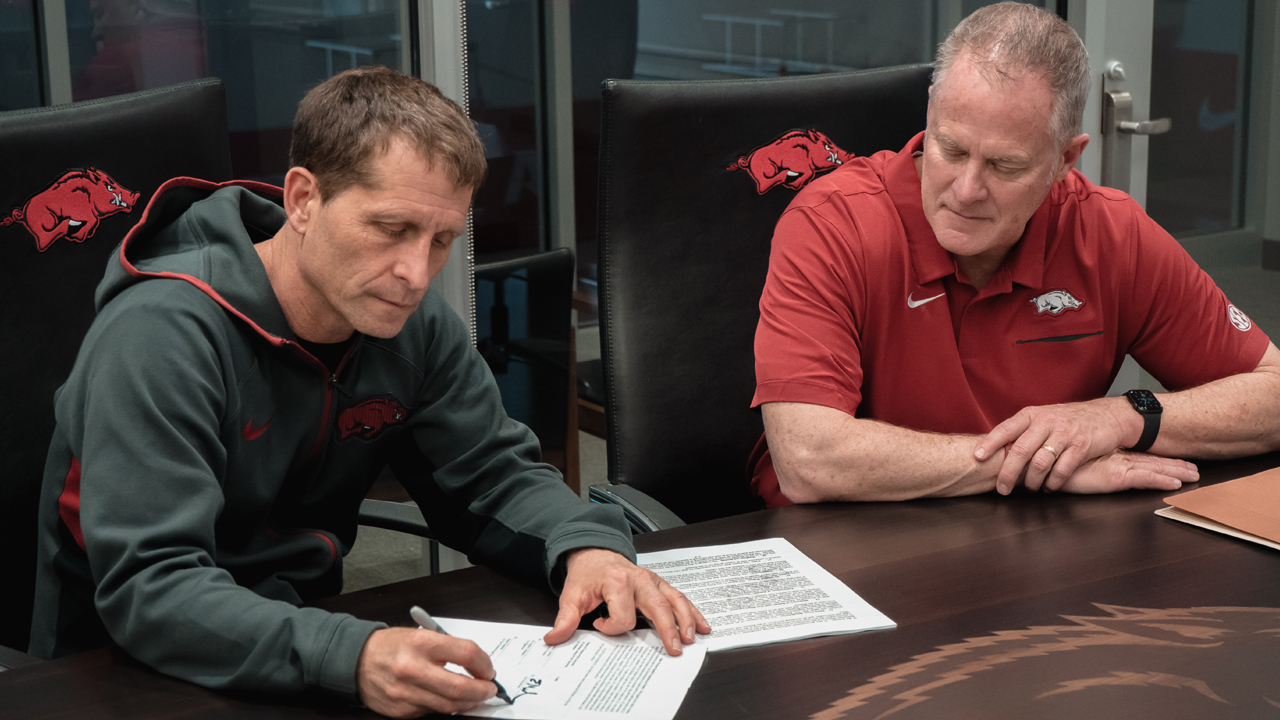 FAYETTEVILLE, Ark. – Coming off the program’s first NCAA Tournament Elite Eight appearance in more than 25 years, the University of Arkansas has signed head men’s basketball coach Eric Musselman to a new employment agreement that could extend Musselman’s tenure in Fayetteville through at least the 2028 season.

The new five–year agreement will run from May 1, 2021 to April 30, 2026 and includes the potential for a pair of one-year automatic agreement extensions (2027, 2028) based on Arkansas receiving bids to the NCAA Men’s Basketball Tournament within the timeframe of the agreement.

“As I mentioned during the course of what was a memorable men’s basketball season, the best way for any head coach to advocate for themselves and their program is to win games,” Vice Chancellor and Director of Athletics Hunter Yurachek said. “Coach Musselman earned this opportunity based on the tremendous progress that he and his coaching staff have made in the past two seasons, culminating with the most exciting season in the recent history of Razorback Basketball. Based on our ongoing dialogue, it is clear to me, Coach Musselman and I both share a desire to work together to ensure he remains the head men’s basketball coach at the University of Arkansas for the foreseeable future. I’m excited for the future of Razorback Basketball and look forward to seeing our program continue to progress under Coach Musselman’s leadership.”

Under the terms of the new agreement Coach Musselman will receive $4.0 million in annual compensation, with additional compensation and incentive payments available based on success in the SEC and NCAA Tournament as well as longevity in the position.

“Arkansas is one of the premier programs in the nation and my family and I are ecstatic to be here,” Musselman said. “I am grateful for the commitment the University is making to me, my family and the future of our basketball program. I have tremendous pride in being a Razorback and it is an honor to represent the state of Arkansas. Our staff remains focused on winning basketball games and building our roster for the future. We look forward to continuing to build on the foundation we have established in our first two seasons in an effort to achieve even greater success for our program, our University and Razorback fans everywhere.”

Musselman is 45-19 in two years at Arkansas and 155-53 in six years as a collegiate head coach. His overall winning percentage of .745 ranks seventh among active NCAA coaches with a minimum of five year­s as a Division I program. As a collegiate head coach, Musselman has won at least 20 games each year, won three conference titles and reached four of the last five NCAA Tournaments played.

This past season, Arkansas advanced to the NCAA Elite Eight for the first time since 1995 and won 25 games overall, which tied for the eighth-best total in the NCAA and was the program’s 13th time to reach the mark in 98 years of basketball. The Razorbacks won 13 SEC games to finish second in the conference. The conference win total tied for the second-most in school history, despite playing just 17 games, and was the most since going 13-5 in 2014-15. After a 2-4 start in SEC play, Musselman got the bus back in the right direction by winning 12 straight games versus SEC opponents and 15 of the final 18 overall.

Arkansas finished sixth in the final USA TODAY coaches poll (voted upon after the NCAA Tournament) and #10 in the Associated Press poll (which did not factor in the NCAA Tournament). It was the first time since 1995 Arkansas ended the season among the nation’s top 10.

Along with team success, Musselman’s players have excelled on a national level the past two years.

In the 2019-20 season, Mason Jones was named the SEC co-Player of the Year by the media and earned honorable mention All-America honors. Jones decided to forego his senior year and went on to sign as a free agent with the Houston Rockets. He now plays for the Philadelphia 76ers with Razorback teammate Isaiah Joe, who entered the NBA Draft after his sophomore campaign and was selected in the second round by Philadelphia.

Despite losing the two players to the NBA from a 20-win team after year one, Musselman proved why he is one of the top recruiters in the nation as he reshaped the roster for 2020-21 thanks to three of the nation’s top 15 graduate transfers, two of the nation’s top 45 sit-out transfers and the fifth-best recruiting class in the country. This spring, Musselman continues to be the standard-bearer when it comes to navigating the new landscape of college basketball recruiting.

New, upper level men’s basketball season tickets are on sale now.  Fans who purchase at this time will be contacted in May to be provided the best seat locations available. Current season ticket holders will be able to renew their season tickets in the coming months. Following the conclusion of the season ticket renewal process, all season ticket holders (renewed and new) will then be placed into the prioritized seat selection process in July. This provides access for fans to upgrade to better seats which may not have been renewed and thus, have become available. For more information, contact the Razorback Ticket Center CLICK HERE FOR WEBSITE – Phone: 800-9824647 (HOGS) or 479-575-5151. Email: raztk@uark.edu.