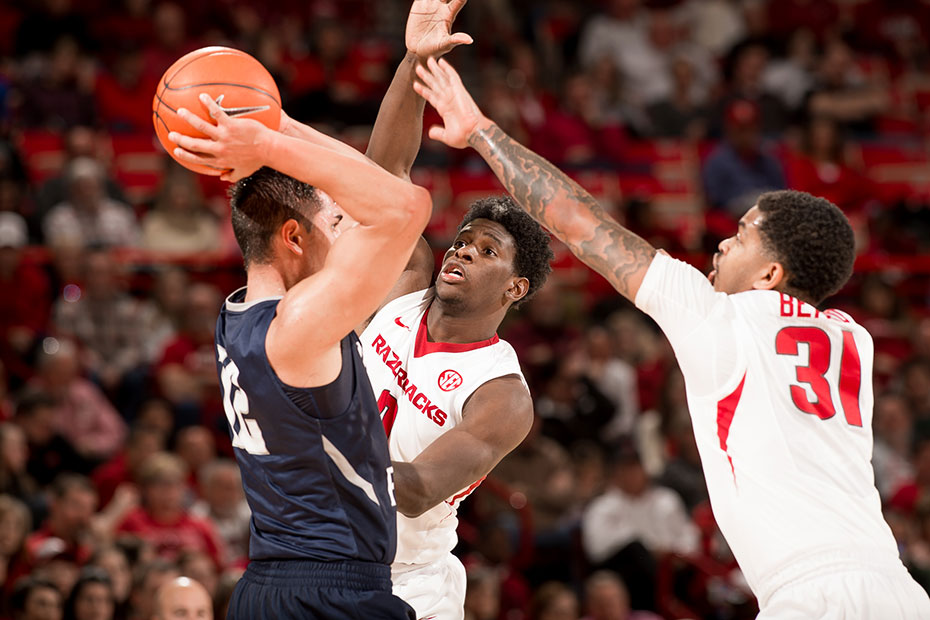 Arkansas Turns Up Defense In Win

FAYETTEVILLE, Ark. — The Arkansas men’s basketball team improved to 8-1 on the season Saturday night as the Razorbacks knocked off the North Florida Ospreys 91-76 in Bud Walton Arena.

The Razorbacks are off to their best nine-game start in the last six years and have started at least 8-1 for the 10th time since joining the Southeastern Conference.

The Hogs and Ospreys (3-8) went into halftime tied at 44 after trading buckets for nearly the entire first period. Arkansas was able to manufacture a 10-0 run midway through the first half, but North Florida climbed back in with the help of its 3-point shooting, making 7-of-17 from long range in the opening frame.

For the second straight game, Dusty Hannahs scored 10 points in the first half, improving his streak of double figure scoring games to 16 straight. Hannahs finished the night with a team-high 17 points to go along with three assists and his first block as a Razorback.

After trading baskets for the first part of the second half, Arkansas strung together an 11-0 run, largely in part to back-to-back 3-point buckets by Daryl Macon, to give the Razorbacks a 73-63 lead. Arkansas turned up the defensive pressure in the second half, forcing 11 of its 19 turnovers in the final period.

With a 21 assist performance Saturday night, Arkansas is one of six teams in the nation with five games of 20-plus assists this year. The Razorbacks are now 37-3 under head coach Mike Anderson when Arkansas reaches 20 assists, including 5-0 this season.

Moses Kingsley continues to be a force in the paint. The SEC’s active leader in double-doubles picked up the 19th of his career on Saturday night with a 13-point and 10-rebound performance. Kingsley had another block, giving him at least one swat in 39 of the last 42 games.

Arkansas’ bench came up big once again, outscoring North Florida 36-6. The Razorbacks also outscored the Ospreys in fast break points, improving Arkansas’ margin over opponents to 148-48 this season. The Hogs have yet to trail in fast break points through the first nine games.

WHAT THEY ARE SAYING
“The tests keep coming for this team, and I see them continuing to come together. They shot the ball well. Early on, I thought we had the opportunity to seize the momentum and fouled. We never got back that rhythm until the second half. We always say that is the half you want to win.” – head coach Mike Anderson

“The game was won inside. I thought we did a good job on the offensive glass, especially in the second half. We got to the free throw line and we attacked their zone. We created some turnovers. At halftime the possessions were probably even, but in the second half that really changed more to our liking. It really changed when we went to our match-up zone. We got into the lane and created havoc. You don’t know when that run is going to come but it came in the second half under the 10-minute mark.” – head coach Mike Anderson

UP NEXT
The Razorbacks will travel to Houston, Texas next week to participate in the Lone Star Shootout on Saturday, Dec. 17 at the Toyota Center. Arkansas will tip it up against the Texas Longhorns at 1:30 p.m. on ESPNU.