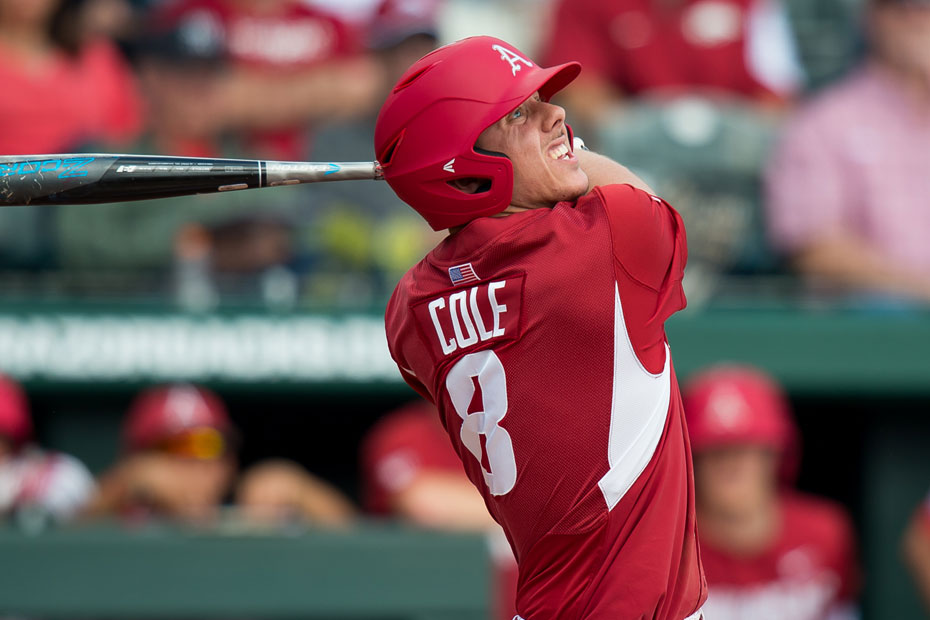 FAYETTEVILLE, Ark. – Arkansas will look to remain undefeated when it hosts Bryant University for its second week of non-conference play at Baum Stadium this weekend. The Hogs are fresh off a season-opening series sweep of Miami (Ohio), while Bryant is coming off a 2-2 week at New Mexico State. First pitch on Friday for game one is set for 3:02 p.m. Saturday’s game two will start at 2:02 p.m., followed by Sunday’s series finale at 1:02 p.m.

Follow Live
All three games will be available on SEC Network+ and the WatchESPN app with Alex Perlman (PXP) and Troy Eklund (Analyst). Phil Elson (PXP) and Rick Schaeffer (Analyst) will have the call on the IMG Sports Network on Friday and Saturday. Scott Inman will join Schaeffer on Sunday for game three.

Welcome To The Show, Kid
Freshman outfielder Dominic Fletcher was already highly touted for his glove in centerfield, but he showed off his bat during opening weekend against Miami (Ohio). Fletcher homered in the seventh inning on Opening Day, part of a 2-for-4 day with two runs scored and two RBIs. With his long ball, Fletcher became the first Razorback true freshman to hit a home run on Opening Day since Andy Wilkins against Wright State in 2008.

The Arms Have It
Last weekend’s opening series gave fans a chance to see what pitching coach Wes Johnson has brought to the table since taking over and the numbers don’t lie. 11 different pitchers saw action in the three games last week and, combined, the staff only allowed two runs, six walks, and struck out 36. The 0.67 team ERA is the second-lowest in the SEC and the third-lowest in the nation. Four different pitchers recorded five strikeouts in their appearances including all three starters.

Cole Races For First “Home Run”
Sophomore Eric Cole started his 2017 season strong at the plate. Over three games, Cole led the team with a .455 average (5-for-11) and two multi-hit games. On Sunday, Cole hit his first home run, albeit an inside-the-park home run. Cole launched his only hit of the game off the left field wall and was able to race around to score. It’s the first inside-the-park home run by a Razorback since Andrew Benintendi did so against Mississippi Valley State in 2015.

Opening Day Shutout
Not since 2011 have the Razorbacks shutout an opponent on Opening Day. After beating Miami (Ohio) last Friday, 7-0, the Hogs not only shutout their opponent on the season’s first day, but it was the third Opening Day shutout under Dave Van Horn. The Hog pitching staff went on to only give up two runs over the next two games, making the opening weekend the best outing by a Hog pitching staff since 2011, when it gave up two runs over three games to Delaware State.

Scouting Bryant
The Bryant Bulldogs come to Baum Stadium after a 2-2 weekend at New Mexico State to open the year last week and bring with them one of the best pitching prospects in the nation in James Karinchak. The junior right-hander has been touted as the top prospect in the NEC and No. 19 starting pitching in the country by D1Baseball.com. Last week, Karinchak struck out 12 New Mexico State batters in five innings in Bryant’s 6-3 season-opening win. As a team, Bryant is coming off an NEC championship and is picked to win their conference again this year.