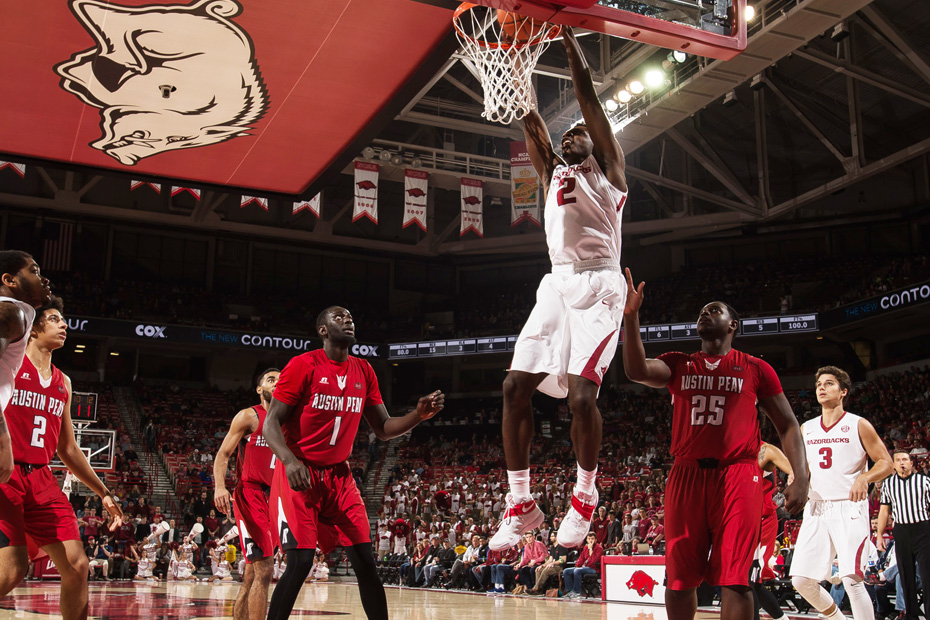 The Razorbacks improved to 6-1 on the season and have won at least six of their first seven games for the eighth time in the last 14 seasons and the 14th time since joining the Southeastern Conference.

The bench provided big minutes for Arkansas, outscoring the Governors 55-12. Three Razorbacks scored in double figures off the bench, including Adrio Bailey who finished with a career-high 14 points and seven rebounds.

C.J. Jones tied a career high in points with 11 and set a career high in blocks with three. Dusty Hannahs came off the bench for the first time this season and recorded 13 points to extend his streak of double-figure scoring games to 15 straight.

Arkansas has outscored its opponents in transition this season by a combined 126-34 margin after scoring 28 on the break against Austin Peay.

The Razorbacks distributed the ball well once again, assisting on 28 baskets, the most Arkansas has ever recorded under Mike Anderson. For the fourth time this season, Arkansas recorded 20 or more assists after doing so only nine times last season. The Razorbacks are 36-3 under Mike Anderson when hitting the 20 assist mark. Moses Kingsley led with team with a career-high five assists to go along with 13 points and seven rebounds.

Arkansas was big inside, outscoring the Governors 52-40 inside the paint and out-rebounding Austin Peay 47-31. The Razorbacks brought down 19 offensive rebounds and also swatted a season-high 11 shots on the defensive end. Arkansas entered the game with seven dunks on the season and brought the crowd to its feet with five slams, including a pair from Kingsley.

UP NEXT
The Razorbacks will play game four of a five-game homestand when Arkansas hosts the Houston Cougars on Tuesday, Dec. 6 inside Bud Walton Arena at 6 p.m.