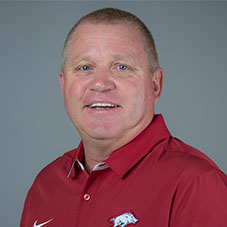 A native of Akron, New York, Schultz boasts more than 30 years of collegiate coaching experience including stints at Arkansas, Florida, and Purdue. This is Schultz’s third stint with the Razorbacks, having previously served as diving coach at Arkansas from 1989-200 and 2008-13.

Brooke earned a 3-meter synchro silver medal finish at the 2017 World University Games, her second international competition before starting her freshman year at Arkansas. Under Schultz’s coaching, she was able to set pool, school and personal records along with earning seven SEC weekly honors in her first season as a Razorback.

Following her national championship, Brooke claimed a national title at the USA Diving Senior National Championships in the 3-meter synchro with partner Murphy Bromberg of Texas. The victory earned her a spot on another national stage, earning bronze at the Bolzano FINA Grand Prix in one of six medals for the USA. She earned another bronze medal at the Madrid FINA Grand Prix in her final competition of the summer, and was named a CSCAA Scholar All-American for her accomplishments in the classroom.

In addition to being named SEC Women’s Diving Coach of the Year during the 2015-16 season, Schultz coached Florida female diver Kahlia Warner to SEC titles in the one-meter and three-meter springboards, which had not been accomplished by a Gator in 30 years. Warner also was named SEC Diver of the Year for her efforts and went on to earn two All-America honors after placing third (three-meter) and sixth (one-meter) off the springboards at the NCAA Championships. Schultz also helped Warner to All-America honors during the 2014-15 season (one-meter) as well as male diver Zach Hernandez to honorable mention All-America honors (platform).

Prior to Schultz’s arrival at Florida in 2014, he spent one year as the associate head coach at Ripfest Diving in Noblesville, Indiana.

During his second stint at Arkansas (2008-13), Schultz coached the Razorback divers to a fourth-place SEC finish in 2011.

During his first tenure with the Razorbacks (1989-2000), Schultz was named the SEC Diving Coach of the Year in 1993 and coached seven Arkansas student-athletes to a total of 18 All-America honors.

Schultz produced a pair of platform SEC champions, with P.J. Murphy taking the men’s title in both 1993 and 1994. In addition, his 1994 Razorback divers scored 38 points at the men’s NCAA Championship to place Arkansas 20th as a team.

Schultz served as the team leader for the United States team at the World University Games in Buffalo, New York, in 1993. Schultz is a 1984 graduate of Kansas State. Prior to KSU, Schultz dove for the University of Maine from 1979-81. He earned his master’s degree in physical education at Northern Michigan.

Schultz and his wife Darby have three children, Hayden, Brooke, and Collin.