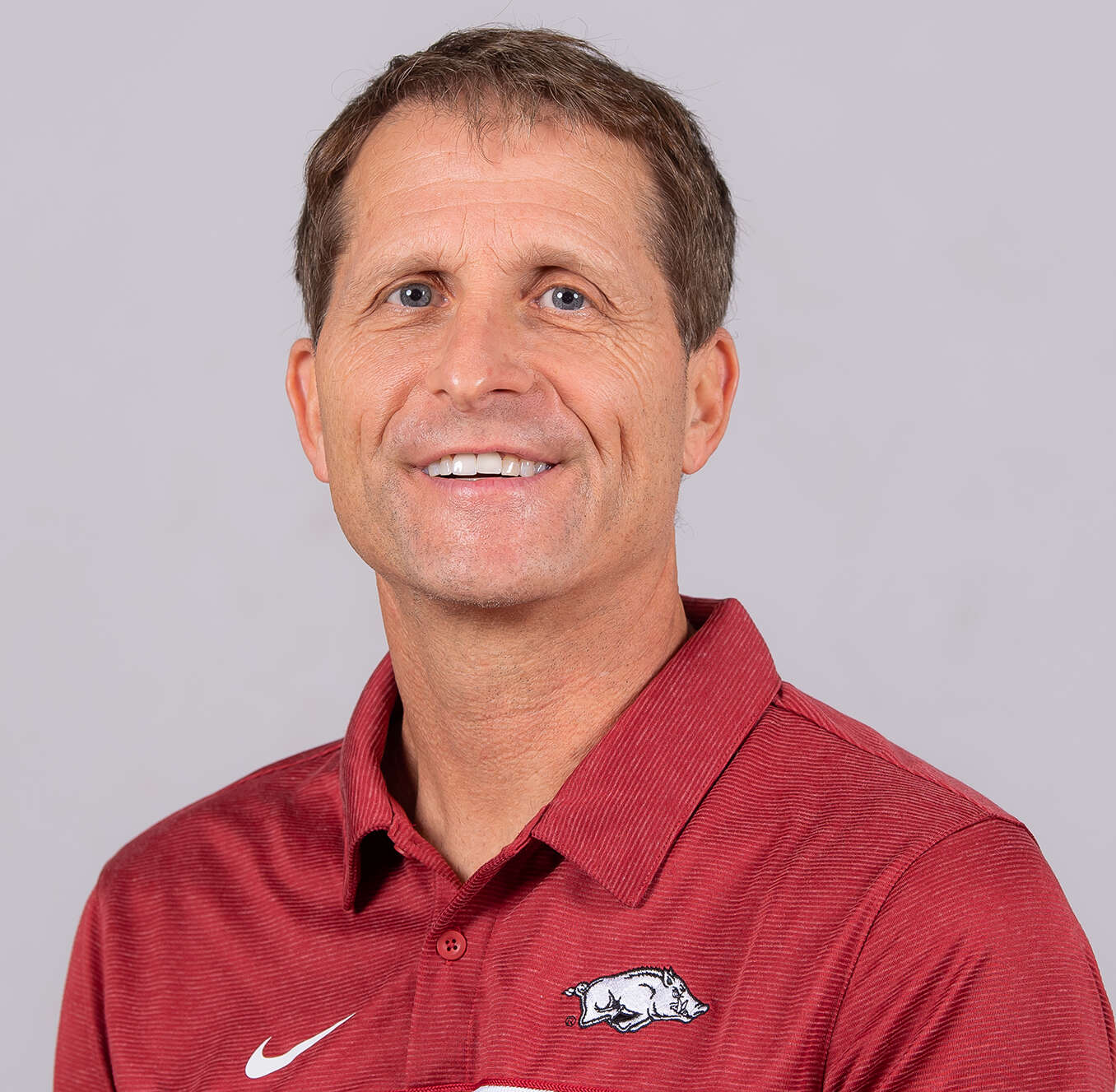 Eric Musselman was named head men’s basketball coach at the University of Arkansas on April 7, 2019, with his official welcome and press conference coming on the following day at Bud Walton Arena. Musselman has 30 years of coaching experience, including 20 years as a head coach in the NBA, NCAA and CBA.

In his six years as a collegiate head coach, Musselman’s teams have won at least 20 games each year with his winning percentage of .745 ranking sixth-best among active Division I coaches (with at least five years as head as a Division I program). After winning the CBI at Nevada in his first year as a collegiate head coach, his teams have played in each of the last four NCAA Tournaments played.

Prior to entering the collegiate head coaching ranks, Musselman was a head coach for seven professional teams, including two seasons with the Golden State Warriors (2002-04) and one with the Sacramento Kings (2006-07). He has won over 500 games as a professional head coach with an overall winning percentage of .634 (503-291).

Musselman recently completed his second season with the Razorbacks and returned the program to heights it had not seen since the mid-1990’s. The Razorbacks advanced to the Elite 8 and finished ranked among the nation’s top 10 (sixth in USA TODAY Coaches poll; 10th in AP) for the first time since 1995.

His exciting brand of basketball and infectious personality has invigorated the Razorback faithful and future Razorbacks. Arkansas ranked eighth in the NCAA in total attendance (294,262) — 12th in season average (15,487) – in year one and led the NCAA by averaging 4,284 in the COVID-19 season of 2020-21. His proven style led the Razorbacks to land the #5 recruiting class in the nation for the 2020-21 season and Musselman has been the standard-bearer negotiating the new landscape of NCAA basketball by landing the top transfer players in the nation each of the last two years.

Numerous individual honors have accompanied the teams’ success under Musselman. Wolf Pack players Caleb Martin and his twin brother Cody have played two seasons with the Charlotte Hornets and Jalen Harris was selected in the second round of the 2020 NBA Draft by Toronto. At Arkansas, Isaiah Joe was drafted in the second round in 2020 by Philadelphia and he plays with Razorback teammate and NBA free agent signee Mason Jones with the 76ers.  Caleb Martin was a two-time All-America selection (2018 and ’19) at Nevada while Jones (2020) and Moses Moody (2021) earned All-America honors at Arkansas. Overall, 17 all-conference honors have been earned by Musselman players over the last six seasons.

AS ARKANSAS HEAD COACH
This past season, Arkansas advanced to the NCAA Elite Eight for the first time since 1995 and won 25 games overall, which tied for the eighth-best total in the NCAA and was the program’s 13th time to reach the mark in 98 years of basketball. The Razorbacks won 13 SEC games to finish second in the conference. The conference win total tied for the second-most in school history, despite playing just 17 games, and was the most since going 13-5 in 2014-15. After a 2-4 start in SEC play, Musselman got the bus back in the right direction by winning 12 straight games versus SEC opponents and 15 of the final 18 overall.

Arkansas finished sixth in the final USA TODAY coaches poll (voted upon after the NCAA Tournament) and #10 in the Associated Press poll (which did not factor in the NCAA Tournament). It was the first time since 1995 Arkansas ended the season among the nation’s top 10.

Mason Jones was one of five finalists for the 2020 Jerry West Award, named AP honorable mention All-America, voted AP SEC co-Player of the Year and first team All-SEC, being one of two unanimous picks by the media. He was the only player in the league to rank among the top 10 in scoring (1st), rebounding (20th), assists (10th) and steals (6th). Jones became just the third person to be named SEC Player of the Week a record four times while becoming the first Razorback to lead the SEC in scoring (22.03; 8th in the NCAA).

Jones and Isaiah Joe were both named USBWA All-District as they were to top-scoring duo in the SEC. Joe ranked seventh in the league by scoring 16.9 ppg. Joe, despite missing six total games due to a knee injury, led the SEC in 3-pointers made (94) while ranking fourth in the nation in 3-pointers made per game (3.26). Joe also set a school record for best free throw percentage in SEC games (.954) while ranking 14th in the NCAA in overall free throw percentage (.890).

AS NEVADA HEAD COACH
At Nevada, Musselman led the Wolf Pack to Mountain West regular-season titles in each of the last three years. The Wolf Pack won the CBI (College Basketball Invitational) postseason tournament in his first year as head coach while adding a Mountain West tournament title in 2017 to secure the program’s first NCAA Tournament appearance since 2007. The past two seasons, Nevada earned at-large berths to the NCAA Tournament as a seventh seed each time.

This past year, Nevada was ranked among the nation’s top 20 all season – including 16 weeks inside the top 10 – and won 29 games for the second straight year, finishing 29-5, to tie the school record for most wins in season. He was one of 15 finalists for the Werner Ladder Naismith Men’s College Coach of the Year Award. The team featured Martin, who was named first team All-Mountain West along with Jordan Caroline while Cody Martin was tabbed third team all-conference. All three were named to the MW All-Defensive team while Jazz Johnson was the league’s Sixth Man of the Year.

The previous season (2017-18), Musselman led the Nevada basketball program to a place it had not been since 2004, winning 29 games (29-8) and reaching the NCAA Tournament Sweet 16 for just the second time in school history. The Wolf Pack upset No. 2 seed Cincinnati but fell just a point short of reaching the school’s first Elite 8, falling 69-68 to Loyola Chicago.

Musselman earned four Coach of the Year honors in 2018 after the Pack’s successful season, including MW coaches and media, USBWA District VIII and NABC District 17.

In year two at Nevada, Musselman led the Pack to a 28-5 ledger, the program’s first MW regular season and tournament titles as Musselman was named the USBWA District VIII Coach of the Year.

In his first season at Nevada, Musselman transformed the culture of the men’s basketball team. Musselman led the Wolf Pack to a 24-14 record and the CBI Championship, defeating Morehead State 85-82 in overtime. BleacherReport.com named him their Mountain West Coach of the Year as the Pack’s 15-win improvement from nine wins to 24 ranked the team as the sixth-most improved NCAA I squad in the country.

Three members of the Pack earned postseason honors. Marqueze Coleman was voted second team All-MW and NABC All-District. Tyron Criswell was selected as the MW Sixth Man of the Year by the conference media. Cameron Oliver set a school freshman mark and MW freshman record with his 99 blocks. Oliver was selected as the Freshman of the Year by the MW media, adding second team All-MW honors and being named to the league’s All-Defensive team.

The 2013 ASU squad improved by 12 wins and advanced to postseason play for the first time in three years. He was promoted to associate head coach prior to the 2013-14 season. While at ASU, Musselman coached 2013 second-round NBA selection Carrick Felix, 2012-13 Pac-12 co-Freshman of the Year Jahii Carson and Jordan Bachynski who led the nation in blocks in 2013-14.

In his only season at LSU, he coached two first team All-SEC selections in Jarrell Martin and Jordan Mickey. Mickey was also selected to the SEC All-Defensive team.

AS A PROFESSIONAL COACH
Musselman has been a head coach in the CBA, the United States Basketball League (USBL) and the NBADL along with the two NBA head coaching stops. His teams have collected six division titles and have advanced to the postseason seven times. He coached 24 players that went on to play in the NBA. Five times he was named CBA all-star coach. In addition to mentoring players to NBA careers, three of his former assistant coaches are current NBA head coaches, including Jim Boylan (Chicago Bulls), Scotty Brooks (Washington Wizards) and David Fitzdale (New York Knicks).

Musselman’s first head coaching job came at the age of 23 when he was hired by the Rapid City Thrillers of the Continental Basketball Association in 1989. He was the youngest coach in CBA history and the fastest to win 100 games.

He led the USBL Florida Sharks to a 53-3 record in two seasons and a league championship which earned him USBL Coach of the Year honors.

After working as an assistant under Doc Rivers and Hall of Fame coach Chuck Daly, he was named the head coach of the Golden State Warriors in 2002. He led the Warriors to 38 wins, a team-high in more than 10 years, and was runner-up in the NBA Coach of Year voting. He also coached the Warriors during the 2003-04 season.

Following a year as an assistant with the Memphis Grizzlies under Mike Fratello, he coached the Sacramento Kings for the 2006-07 season.

Musselman made his first stop in Reno for the 2010-11 season when he was head coach for the NBA D-League’s Bighorns and led them to their first Western Conference title in franchise history.

While coaching the Reno Bighorns in NBADL he worked with Jeremy Lin, Danny Green and Steve Novak who were called up to the NBA. Gerald Green, Malcom Thomas, Darius Morris, Jamario Moon and Courtney Fortson earned trips to the NBA when he coached them with the D-Fenders.

Musselman has experience coaching international basketball having served as the head coach of the Dominican Republic National Team (2010-11), The US and Team China in the Adidas Global Experience (2009, 2010) and The Venezuela National Team (2011-13).

PERSONAL
Born in Ashland, Ohio he attended high school in Brecksville south of Cleveland. He attended the University of San Diego and helped the Toreros to a 24-6 record as a senior and a trip to the NCAA Tournament While at USD he was named to the West Coast Conference All-Academic team three times and the Toreros played in two NCAA Tournaments.

Musselman is married to Danyelle Sargent Musselman who has worked at ESPN, Fox Sports and the NFL Network as a broadcaster. Musselman has two sons Michael and Matthew. He and Danyelle has a daughter, Mariah.

Musselman’s father Bill was also an NBA head coach and they were the first father-son combination to become head coaches in the NBA.