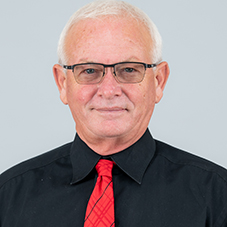 Mark Cook has guided the Arkansas gymnastics program from infancy through its first 15 years of existence and built one of the most consistent programs in the nation.

A three-time SEC Coach of the Year, Cook has led Arkansas to 15-straight NCAA Regional appearances from 2004-18. Those include eight NCAA Championship appearances, including six straight from 2008-13, and NCAA Super Six appearances in 2009 and 2012.

In his 16th season as the head coach at Arkansas, Cook led the Razorbacks to a record season that was capped by a first place finish in the first session at the SEC Championship and a fifth place finish overall, its highest since 2011, and a return to the NCAA Championships for the first time in five years. The Razorbacks set multiple team and school records in 2018, becoming the first team in school history to record three scores of 197 or higher in a single year, including a team high 197.300 in the Arkansas Tri Meet.

Cook led Arkansas to the largest turnaround in the Southeastern Conference in 2018. Arkansas improved its RQS (Regional Qualifying Score) by 1.245 points, and its season average by 2.045 points from the previous sesaon. No other school in the conference has improved its RQS by more than 0.33 from this point last season. The team was ranked No. 27 heading into regionals last season, compared to No. 10 this year.

Entering the postseason ranked No. 13 in the nation, Cook led the Razorbacks to their 13th consecutive NCAA Regionals appearance, as they finished third in Iowa City with a score of 195.500. Wellick qualified for NCAA Nationals as an individual, where she finished seventh in the evening session and earned Second Team All-American honors in all-around.

In 2014, Coach Cook led the program to new heights, as he guided Kathrine Grable to a pair of NCAA National Championships, the first two ever won by Arkansas. Grable won the national championship in the floor exercise and was the co-national champion on the vault.

It was the second time in his career that he had coached an athlete to the national title on the vault, as Grable posted a score of 9.975 during the first flight. LSU’s Rheagan Courville matched Grable’s score in the second flight to claim a share of the title. The score of 9.975 was the highest winning vault score in NCAA history. Grable also became the first gymnast to win a national championship in the floor exercise under Cook, as she scored a 9.962 to claim her second national title at the 2014 NCAA Championships.

In 2013, Arkansas scored its third highest score in program history of 197.100. Arkansas advanced from the Corvallis NCAA Regional after posting the best score at a regional ever. The Razorbacks advanced to the NCAA Championship meet for the sixth straight appearance and finished ranked tenth in the nation.

Four Razorbacks (Katherine Grable, Kelci Lewis, Sydnie Dillard and Keara Glover) were named to All-SEC teams for their efforts at the 2013 SEC Championship. Grable and Lewis were named to the All-SEC first team, while Dillard and Glover were named the SEC All-Freshman team. The Razorbacks’ four selections marked the largest single-season selection in program history.

Grable added four All-America honors, to bring her total to eight career honors, and also advanced to the NCAA event finals, finishing tied for sixth on the floor.

In 2012, in its 10th season, Arkansas earned its first No. 1 national ranking, earned its first event No. 1 ranking (bars), and had individuals ranked No. 1 in the all-around, on floor and on bars for the first time. Arkansas hosted an NCAA Regional for the third time and advanced to the NCAA Championship in Duluth, Ga.

The Razorbacks, who beat 15 teams ranked in the top 25, finished third in the Session II semifinal to advance to the Super Six and finished sixth in the country for Arkansas’ second-best finish ever.

In 2011, Arkansas recorded its third-best finish ever. The Razorbacks won the NCAA North Central Regional, beating No. 1 Florida for the title. Arkansas tied for fourth in the NCAA Session I Semifinal to tie for ninth in the country and missed advancing to the Super Six by one spot.

Cook’s team also beat top-ranked Florida during the regular season, recorded its first-ever win over Georgia, which was ranked No. 4 at the time, tied for the SEC regular-season title, had 11 wins over teams ranked in the top 25, beat LSU in Baton Rouge for the first time, set school records with seven dual meet wins and four wins on the road, and set school records with five SEC wins and three SEC road wins.

In addition, Pisani became the first Razorback to earn South Central Regional Gymnast of the Year honors, and Michelle Stout was named the SEC’s co-Scholar-Athlete of the Year.

In 2010, Arkansas was ranked seventh at the end of the regular season and finished No. 11 in the nation after nationals. Arkansas finished second in the NCAA West Regional, led the SEC in team grade point average and ranked No. 16 in the country, set school records for overall team score and on bars, recorded five of the top eight overall team scores in program history and had wins over eight top 25 ranked opponents. Arkansas ranked No. 11 on vault and No. 13 on bars.

Cook helped guide senior Casey Jo Magee and Pisani to All-America status at the 2010 national championship. The pair combined for six appearances in the NCAA individual event finals. Magee was second in the nation in the all-around, the highest finish ever for a Razorback, and fourth on beam, tied for fifth on bars and 12th on floor. Pisani was 10th on floor and 12th on vault.

In 2009, Arkansas advanced to the NCAA Super Six for the first time, had a national fifth-place finish and a final ranking of No. 5, won the NCAA South Central Regional and recorded wins over No. 1 Florida, No. 2 Utah, No. 4 Stanford, No. 6 LSU, No. 6 Oregon State, No. 7 UCLA, No. 7 Oklahoma and No. 9 Alabama. Arkansas’ No. 5 final team ranking included a No. 6 ranking on vault and a No. 10 finish on bars.

In addition, the 2010 and 2011 squads both earned public recognition from the NCAA for ranking among the top 10 percent nationally in multi-year Academic Progress Rate (APR). The 2010 honor was the first for an SEC program since 2006.

Cook came to Arkansas in May 2001 to build the Razorback program from scratch. He was consulted on the construction of one of the top practice facilities in the nation. He selected, ordered and assembled equipment; and helped fans and Northwest Arkansas quickly accept and learn about his sport. He was also scouting, recruiting and signing the first recruiting class in school history.

Arkansas’ first team, an all-freshman lineup in 2003, finished its inaugural season ranked No. 41 in the nation with No. 37 and No. 43 rankings on bars and vault, respectively.

In 2004, the Razorbacks earned a spot in an NCAA Regional for the first time and haven’t missed the postseason since. In 2005, Arkansas finished 15th in the final rankings and haven’t finished lower than 13th since. In 2006, the Razorbacks reached the NCAA Championships for the first time and later reached six straight NCAA Championships from 2008-13.

In 2004, Arkansas earned an NCAA Regional appearance and a top 20 national ranking (No. 20) in just the second season in program history. In addition, the Razorbacks had their first all-conference athlete in Melissa Leigh on bars. Arkansas was No. 24 in the nation on bars and No. 32 on vault.

The 2005 team also advanced to a regional and finished with an overall ranking of No. 26. The Razorbacks were No. 18 on bars and No. 27 on vault.

In 2006, the first recruiting class in school history helped Arkansas upset No. 9 UCLA in the NCAA South Central Regional, took the Razorbacks to their first NCAA Championship and ended the year ranked No. 12. Arkansas was No. 20 on both vault and bars.

Cook was the head coach at Stanford University for four seasons (1998-2001), leading the Cardinal to two Pac-10 titles, four NCAA Regional appearances, two NCAA top-10 finishes, and produced several individual and team records which still stand. He coached the program’s first individual national champion, Larissa Fontaine on vault. During his tenure, Stanford finished as high as eighth in the nation (2001).

Prior to Stanford, Cook helped build NCAA and Pac-10 champions at UCLA as an assistant coach from 1995-97. During Cook’s three years at UCLA, the Bruins won two Pac-10 titles, three NCAA Regional championships and their first NCAA Championship (1997). Cook’s work led to UCLA moving from fourth at NCAAs the season he arrived in 1995 to national runner-up in 1996 before taking the team title in 1997.

Before moving into the collegiate coaching ranks, Cook was considered one of the top club coaches in the country. Serving as the head coach for Clovis (Calif.) Academy of Gymnastics from 1980-94, Cook helped build Clovis into a 900-student club. He produced numerous level 10 gymnasts, had athletes qualify for the USA Junior Olympic National Team, and produced several elite gymnasts who competed at US Classics and USA Championships. In his final two years at Clovis, Cook also served as the academy director. Cook was named the Elite Coach of the Year by the United States Elite Coaches Association in 1989.