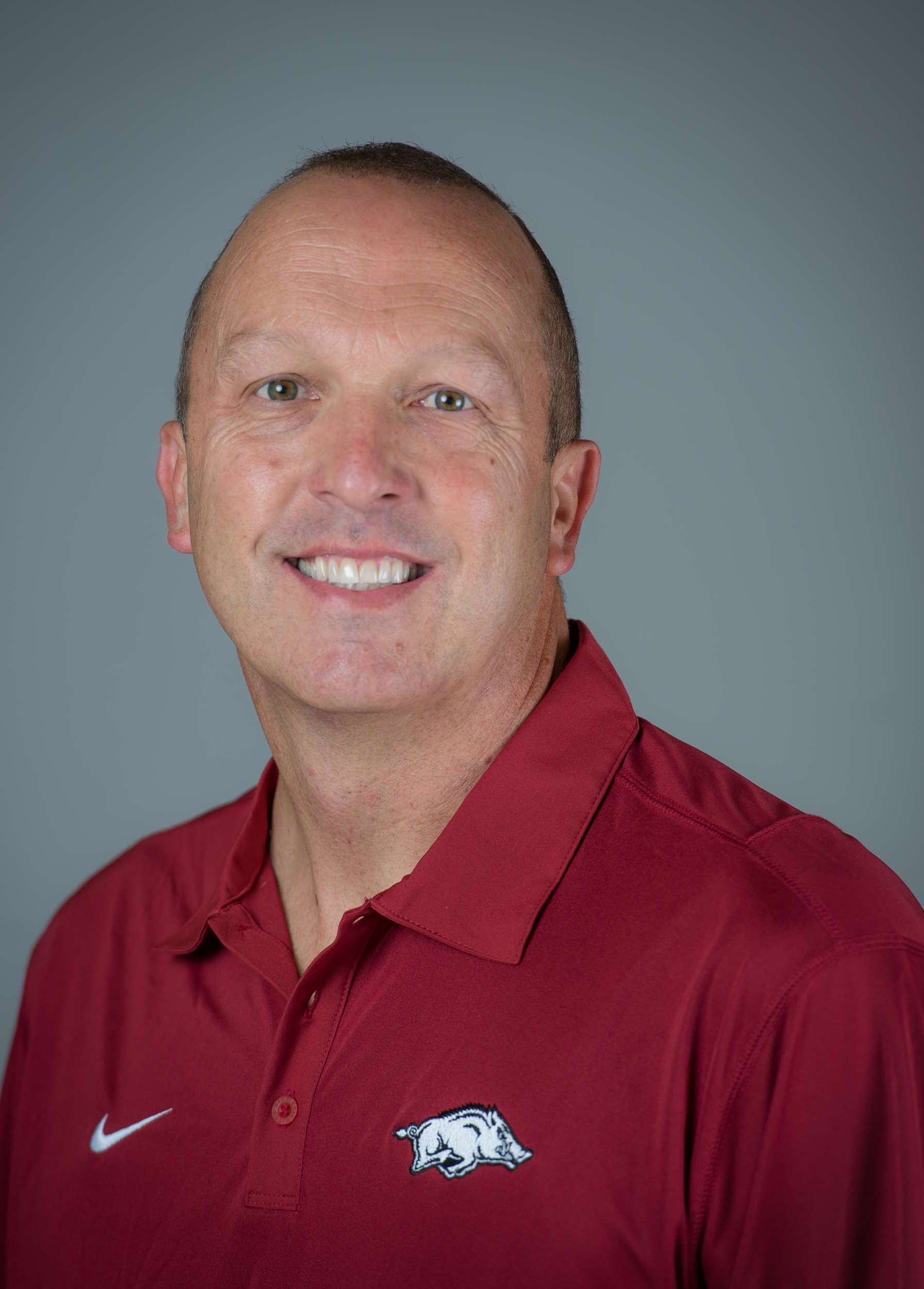 Neil Harper was named the eighth head coach in Arkansas Swimming and Diving program history on May 4, 2016.

A native of London, Harper enters his seventh year in Fayetteville and 29th year as a head coach, holding a combined 211-69 record in his 22 years as a women’s head coach.

During the 2020-21 season, Harper also helped foster individual success for his players – Anna Hopkin and Peyton Palsha were both named to the All-SEC Second Team, while Palsha was also named an All-American in the 1650 freestyle. Most impressive was Hopkin’s success away from Fayetteville, though, as she helped anchor the British 4×100 relay team that won gold at the Tokyo Olympics. Hopkin registered a blazing 52.00 split in her anchoring leg of the relay, helping the British team to post a time of 3:37.58, a new world record.

During his coaching career, Harper has worked with 168 student-athletes, both individual and relay swimmers, who have produced NCAA All-America honors.

During the 2015-16 season, Harper led Nevada to the highest finish of a non-Power Five team at the NCAA Championships. He guided the Wolf Pack to a 7-0 overall record in the regular season and won the first Mountain West title in program history during his first season.

His coaching accomplishments at Nevada include sophomore Sharae Zheng earning College Swimming Coaches Association of America (CSCAA) Diver of the Year and Jian Li You being selected as CSCAA Diving Coach of the Year. In addition, the Wolf Pack swimming and diving teams exceeded the benchmark for Academic Progress Rate (APR) scores during the last two years.

Harper’s coaching experience extends internationally. He coached five of his swimmers at the 2004 Olympics in Greece, as well as the World Championships in Spain and Japan, and the Commonwealth Games. He also coached the South African Olympic team in the 2000 Olympics in Sydney, Australia.

In 14 seasons as Florida State’s head men’s and women’s swimming coach, Harper’s student-athletes tallied 175 All-ACC selections and 98 individual and relay conference titles. He posted a 159-38 (.807) record with the women’s team and went 112-45 (.713) with the men’s team. The Seminole women reached double-digit win totals in nine seasons under Harper, including a program record 17-3 campaign in 2008. His winning percentage and total wins with the Seminole women rank first in program history. In the classroom, his women’s team earned NCAA All-Academic Team honors seven consecutive years with an overall team GPA above 3.2 from 2007-13. In addition, Harper was named ACC Coach of the Year in 2004, 2006 and 2007.

Harper’s head coaching career began with Ohio State in 1997, where he spent two seasons as the Buckeyes’ head women’s coach. He posted a 15-12 mark and helped qualify six student-athletes for the NCAA Championships. In the classroom, Ohio State excelled as well as both of his teams earned NCAA All-Academic selections. Within the conference, the Buckeyes received more than 20 Academic All-Big Ten Conference honors.

Before his arrival in Columbus, Ohio, Harper served as the top assistant at Florida State from 1994-97. One of his main duties was to coordinate the Seminoles’ recruiting efforts. During that time, Florida State produced numerous All-Americans, including the Seminoles’ first NCAA champion. Harper was also in charge of the team’s strength and conditioning while working with the stroke and individual medley swimmers. In addition, he helped produce the program’s first female All-Americans in six years.

Upon graduation from LSU, Harper began his collegiate coaching career as an assistant coach for the Tigers from 1988-94. He helped the Tiger swimmers earn 21 NCAA All-America honors and seven SEC titles. During the 1991 season, both the men and women posted one of their best finishes at the NCAA Championship as both came away with a 14th place showing.

As a student-athlete at LSU, Harper was a seven-time All-American, four-time SEC Champion and team captain in 1988. He also competed in the 1984 and 1988 Olympic Games on the British National Team where he was a member of the 400-meter Medley Relay team that finished sixth at the 1984 games and fourth in the 1988 games.

Harper and his wife, Paige, who was also an All-American and SEC champion swimmer at LSU, have two daughters, Katherine and Kelly.