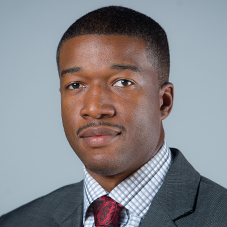 A former Razorback and one of the best young recruiters in the nation, TJ Cleveland returned to the University of Arkansas in 2011 and completed his eighth year as an assistant coach in 2018-19.

A 16-year coaching and staff veteran since his playing days at Arkansas, Cleveland’s career path back to Fayetteville mirrors that of his mentor, Mike Anderson.

Cleveland has been identified as future head coaching prospect as he has been selected to participate, along with 30 other assistant coaches, in the 2019 Collegiate Coaching Consortium will be held in conjunction with the NABC Convention and NCAA Men’s Final Four in Minneapolis. The invitation-only Collegiate Coaching Consortium builds upon the Villa 7 Consortium, which Cleveland has been featured five times. Following his third season with Missouri, Cleveland was asked to participate and was featured at Nike’s Top Up & Coming Assistants Villa 7 Consortium.

A player for the Razorbacks from 1998-2002, Cleveland joined Anderson’s staff at the University of Alabama-Birmingham upon graduation as a video coordinator and was named an assistant coach prior to the 2005-06 season. Cleveland then joined Coach Anderson at Missouri for the 2006-07 season and, in five seasons with the Tigers, became known as a tireless worker and recruiter as well as one of the up-and-coming young coaches in the college game.

Cleveland’s efforts with the Arkansas backcourt were visible immediately upon his return to Fayetteville, as the Razorbacks improved their turnover margin by 200-percent, which moved them from 101st in the nation to 19th in a single season. Arkansas led the SEC in turnover margin five times, finishing second once, and led the league in steals four times

His relentless work on the recruiting trail has helped land a top 25 class in both 2017 and 2018, featuring seven of the top players in the state of Arkansas over the two-year span.

Cleveland was also instrumental in the recruitment of Bobby Portis, as he became just the second Razorback in program history to be named the SEC Player of the Year by both the Associated Press and league head coaches in 2014-15. Portis was the first Razorback to surpass 1,000 points and 500 rebounds as a sophomore and went on to become the 12th player in program history to be selected in the first round of the NBA Draft, when he went 22nd overall to the Chicago Bulls.

In 2018-19, Razorbacks guards Isaiah Joe and Jalen Harris ranked among the NCAA leaders. Joe, who was named to the SEC All-Freshman team and All-District by USBWA, set a school record for 3-pointers made (1113), which tied an SEC record for most by a freshman and ranks fourth in NCAA history for most made by a freshman. Joe, who set an SEC freshman record for 3-pointers made per game, was just the fourth freshman to lead the SEC in 3-point field goal percentage. He ranked second among all NCAA freshman in 3-poniters made (3.32; 13th overall), 3-pointers made per game (113; 18th overall) and 3-point field goal percentage (.414; 36th overall). Jalen Harris ranked 15th in the NCAA in assist-to-turnover ratio. Overall, Arkansas ranked second in the SEC in assists (23rd in the NCAA) and second in turnover margin (26th nationally).

The Razorbacks posted the seventh most wins in program history in 2016-17, as the coaching staff led the squad to 12 SEC wins for the fifth time in school history and captured six conference road victories, tying the 1994 championship team and the 2015 NCAA Tournament squad for the most in the SEC era. The Razorbacks ended the season 8-3 in their last 11 SEC road contests, the best stretch since the end of the 1993-94 and beginning of the 1994-95 seasons. Arkansas used its second-best free throw percentage in school history (.761) to post a 4-0 record in games decided by one possession and a perfect 24-0 mark when leading with two minutes left in the contest.

During his tenure with Missouri, Cleveland worked predominantly with the Tigers’ guards, and players flourished under his tutelage. In 2006-07, Cleveland’s first season at Missouri, he mentored Stefhon Hannah to Big 12 Newcomer of the Year accolades. Another Cleveland trainee, J.T. Tiller, took Co-Big 12 Defensive Player of the Year honors in 2008-09.

Executing Anderson’s style of play from the guard position has been instrumental in the team success that Cleveland has enjoyed both as a player and coach. Missouri ranked second in the nation in turnover margin for three straight seasons and led the nation in steals in 2010 (10.9 per game) and assists in 2009 (18.4 per contest). Cleveland’s last team at Missouri ranked second in the nation in both steals per game (9.7) and turnover margin (5.4). The Tigers also ranked among the nation’s top 30 in five other statistical categories, including scoring offense (10), assists per game (15), assist-turnover ratio (24), blocked shots per game (26) and scoring margin (27).

Cleveland’s coaching career started at UAB where he worked his way up from video coordinator to assistant coach. In his one year as a coach with the Blazers, UAB advanced to the first round of the NCAA Tournament and ranked third in the nation in steals per game at 10.9 per contest. UAB also led Conference USA in assists, assist-turnover ratio, turnover margin and field goal percentage, while ranking second in scoring, scoring margin and steals. Former Blazer Carldell Johnson ranked ninth in the nation in assists per game that year with 6.3 per outing, while also ranking 20th with 2.6 steals per game.

During Cleveland’s four-year career at Arkansas, the Razorbacks compiled a 76-50 overall record and made three trips to the NCAA Tournament. A two-year captain, Cleveland led the team in steals three times in his four seasons in Fayetteville and currently ranks tied for fifth on Arkansas’ all-time steals list with 226. Cleveland led the Razorbacks in assists two times and three-point percentage in 1999-2000.

As a prep player for Minor High School in Birmingham, Alabama, Cleveland was an all-state and all-metro player as well as the MVP of the state tournament as a senior when he led his team to the state championship.

A 2002 graduate from Arkansas with a degree in communication, he is married to Ami (Watson) and the couple have twins: Caynen Thomas and Cayden James.