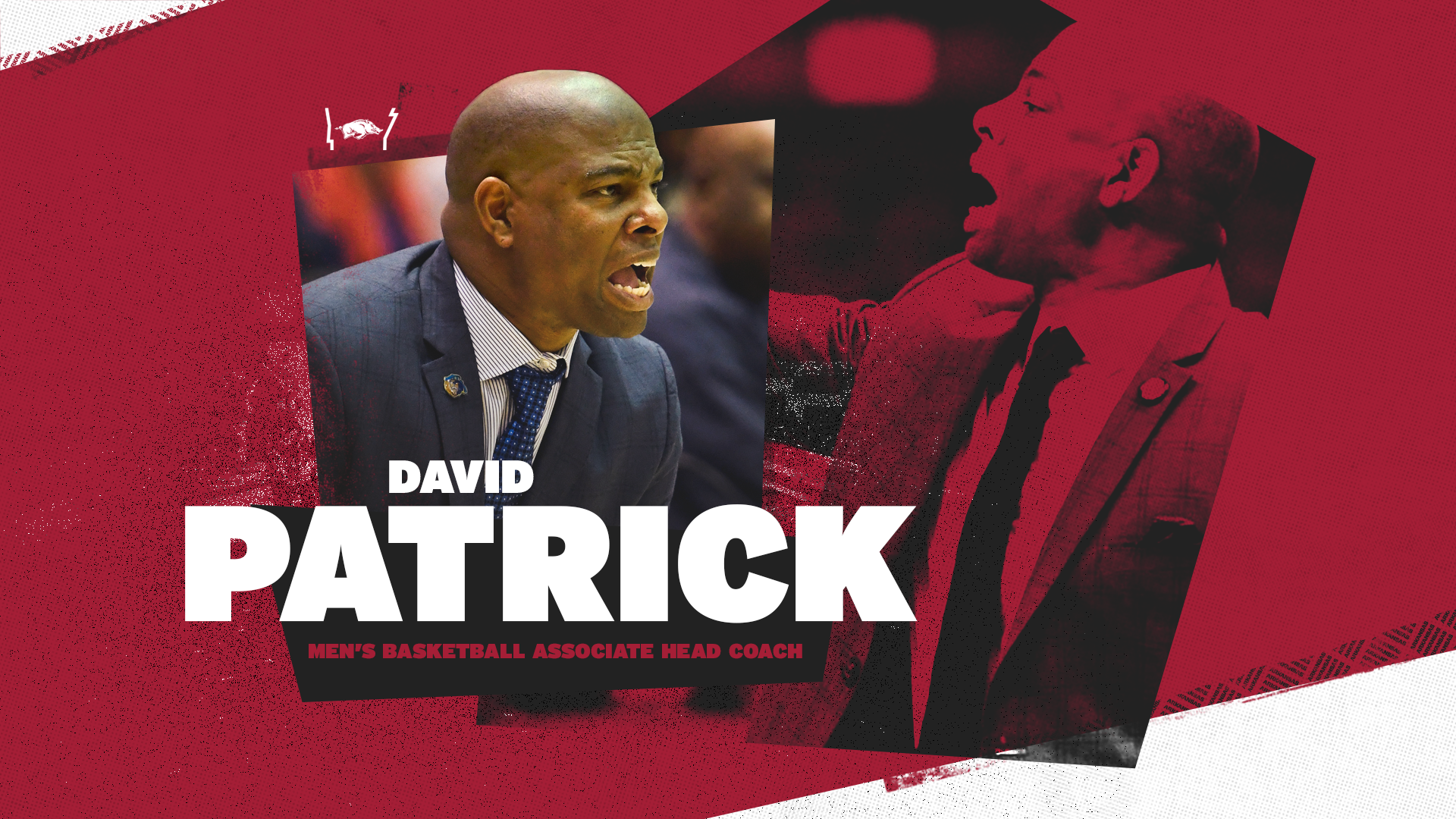 FAYETTEVILLE – David Patrick, a finalist for two National Coach of the Year Awards this past season as head coach at UC Riverside, has been named associate head coach for men’s basketball at the University of Arkansas, Razorback head coach Eric Musselman announced.

“I have known Coach Patrick both professionally and personally for many years,” Musselman said. “We have a great bond and he will fit seamlessly into our basketball family. He brings so much to our program. He has Division I head coaching experience, experience evaluating talent in the NBA from his time with the Houston Rockets, and an incredible reputation as a recruiter. His basketball knowledge is excellent, and he is someone I have great comfort discussing all the intricacies that go with building a winning program.”

Musselman and Patrick previously worked together at LSU, helping the Tigers reach the 2015 NCAA Tournament. Patrick was also responsible for the recruitment of 2016 number one overall NBA Draft pick Ben Simmons, while at LSU.

“I am honored to be reuniting with Coach Musselman at the University of Arkansas,” Patrick said. “I am incredibly grateful for my time as head coach at UC Riverside and want to sincerely thank every single person that I had the pleasure of working with during my time there. I especially want to thank (Director of Intercollegiate Athletics) Tamica Smith Jones and the administration at UC Riverside for giving me the opportunity of serving as their head coach, as well as our student-athletes, for without you, I would not be in this position. The chance to help lead the historic Arkansas program, be close to home, and return to SEC basketball was one that my family and I could not turn down. We cannot wait to get down to Fayetteville and I cannot wait to get to work to continue pushing the Razorback program forward.”

Patrick comes to Arkansas after two seasons as head coach at UC Riverside. For his effort in 2019-20, Patrick was a finalist for two national awards – the Hugh Durham Coach of the Year, given annually to the most outstanding Division I mid-major men’s college basketball head coach, and the Ben Jobe Coach of the Year, presented annually to the top Division I minority coach. Also, prior to the season being cut short due to COVID-19, the Highlanders received invitations to play in the College Insider Tournament (CIT) and the College Basketball Invitational (CBI) postseason tournaments.

A Melbourne, Australia native and current assistant coach for the Australian Men’s National Basketball Team, Patrick helped lead the Australia Boomers to a fourth-place finish in the 2019 FIBA World Championships. On August 24, 2019, Patrick also helped guide the Boomers to a historic 98-94 win over Team USA for the first time in history. Patrick coached NBA champions and Australian National Team guards Patty Mills and Matthew Dellavedova during their collegiate careers at Saint Mary’s College (Calif.) Patrick’s reputation as a savvy and experienced recruiter is attributed to his ability to attract top talent. At LSU, he was integral in landing the nation’s number five and number three-ranked recruiting classes of 2013 and 2015, respectively.

Patrick posted a 27-38 record at UC Riverside, the best two-year start in school history. He inherited a program that won just nine games the season prior to his arrival and quickly turned the program around. The Highlanders won 17 games last season, which tied the most wins in Division I program history. The Highlanders led the Big West Conference and ranked eighth nationally in scoring defense (60.6 ppg). The squad additionally led the Big West in 3-point field goal attempts (722) while ranking second in the league in defensive rebounding (27.03 avg.), field goal percentage defense (.404), rebound margin (+5.5), 3-point field goals made (7.9 per game/254 total) and total rebounds (35.78 per game/1,145 total).

Prior to his time at UC Riverside, Patrick made an immediate impact in his two seasons as assistant head coach at TCU, playing a significant role in the second-largest turnaround in program history. The 2016-17 Horned Frogs went 24-15, good for a 12-game improvement over the previous year. The final win of the season came in the championship game of the NIT (National Invitation Tournament), an 88-56 victory over Georgia Tech that gave TCU its first ever postseason championship. The 24 wins were also the second-most in school history. The following season (2017-18), TCU went 21-12 and qualified for the NCAA Tournament for the first time in 20 years, earning a number six seed.

Patrick spent four years at LSU, the final two as assistant head coach, helping the Tigers reach the 2014 NIT and 2015 NCAA Tournament. He served as a scout for the Houston Rockets for two seasons (2010-12) and as an assistant coach for four years at Saint Mary’s (2006-10). During his tenure in Moraga, the Gaels had school record-setting seasons in 2008 and 2010. Both teams finished with 28-win seasons and the 2010 squad made it to the Sweet 16 of the NCAA Tournament. He began his coaching career at Nicholls State (2005-06).

Patrick was born in Bermuda and grew up in Australia. He played one season at Syracuse, with his team reaching the 1996 NCAA Championship game, and then was a point guard at UL Lafayette from 1997-2000. He also played four years professionally in Australia, England and Spain.

Following a stint playing with the Australian Junior National Team, Patrick came to the United States in 1994. As a high schooler, he was selected as the Louisiana Player of the Year after leading Trafton Academy to the state quarterfinals. That same year, he was named the district’s MVP, earned a First Team All-Parish selection, and was chosen to participate in the Louisiana State High School All-Star Game.

Patrick is married to the former Cassie Frank of Oberlin, La., and they have two daughters.