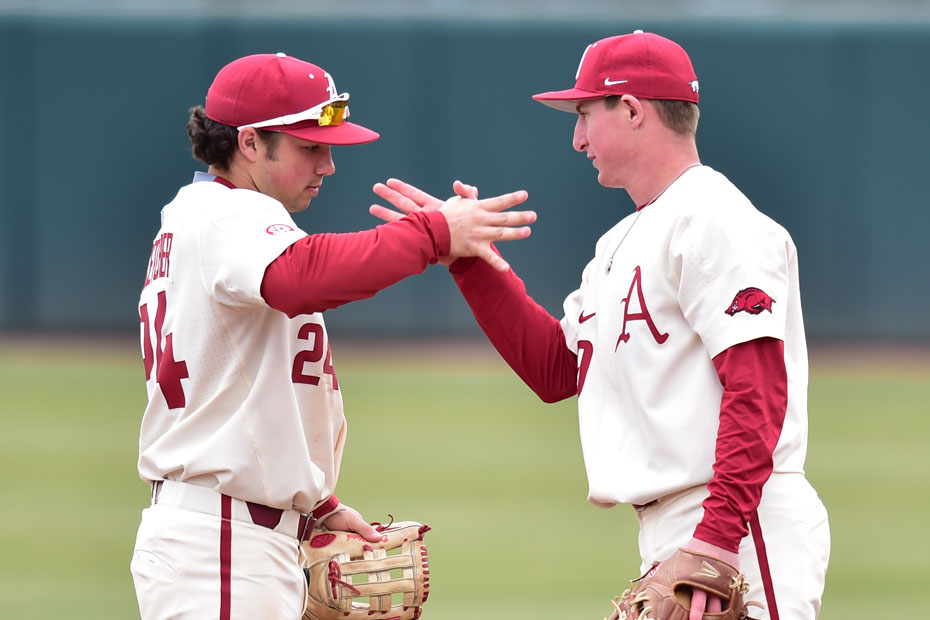 SAN DIEGO, Calif. – The third-ranked Razorback baseball team is on the road for the first time in 2018 this week. With this weekend’s Tony Gwynn Legacy tournament still on deck, the Hogs will kick off their west coast swing with a neutral site game against PAC-12 power Arizona on Wednesday. The game will be played at Tony Gwynn Stadium on San Diego State’s campus and first pitch is slated for 9 p.m. CT.

Follow Live
Wednesday’s game will be televised regionally on Cox Sports Television with Brett Dolan (PXP) and Troy Eklund (Analyst) calling the action. Scott Inman (PXP) will have the radio call on the IMG Sports Network.

Kacey Murphy Set To Make First Start of 2018
Razorback junior left-hander Kacey Murphy will get the nod for the start against Arizona Wednesday night. Murphy was a key hurler for the Hogs in 2017 as he made 10 starts in 19 appearances to compile a career-best 3.65 ERA over 49.1 innings. His 68 strikeouts were third-best on the team and he was one of only two Hog pitchers to throw a complete game during the season. That complete game came in the SEC Tournament semifinals where he shut down the top-seeded Florida Gators in seven innings, allowing just two hits and striking out eight.

Soooieville Sluggers Year Two?
In 2017, Arkansas crushed an SEC-best 83 home runs, the most home runs by a Razorback team since 2010. The Hogs picked up where they left off during opening weekend last week, hitting eight homers, including six in Saturday’s 32-4 victory over Bucknell. Arkansas currently leads all SEC teams in home runs and is tops in the nation after week one.

Shaddy Goes All Out To Earn SEC Player Of The Week
Carson Shaddy was the Razorbacks’ most efficient hitter during the season’s first weekend as he totaled an SEC-leading nine RBIs in 12 plate appearances. He was only 4-for-7 (.571) at the plate, but drew four walks to build up a .750 on-base percentage, which is third best in the league. On Opening Day, Shaddy started 2018 off with a bang, clubbing four RBIs as part of a 1-for-2 day with a home run. The four RBIs were the most for a Razorback on Opening Day since Blake Parker drove in four in 2005 against Dallas Baptist. He finished the weekend with a .571/.750/1.571 slash line, which are all top-10 totals in the SEC. His slugging percentage is good for second in the conference and he was one of eight players in the league to hit two homers in the first three games.

Hogs Plate 49 Runs On Bucknell
Arkansas cruised to a sweep over Bucknell on opening weekend. While the three wins were impressive enough, it was the amount of runs that was astounding. 49 Razorback runs crossed the plate combined over the three games including 32 in Saturday’s game two. The 49 runs is the most in the first three games of a season since 1997. The sweep is the team’s fifth-straight dating back to 2014, while the 32 runs on Saturday was just one less than the school record for runs scored in a single-game (1984).