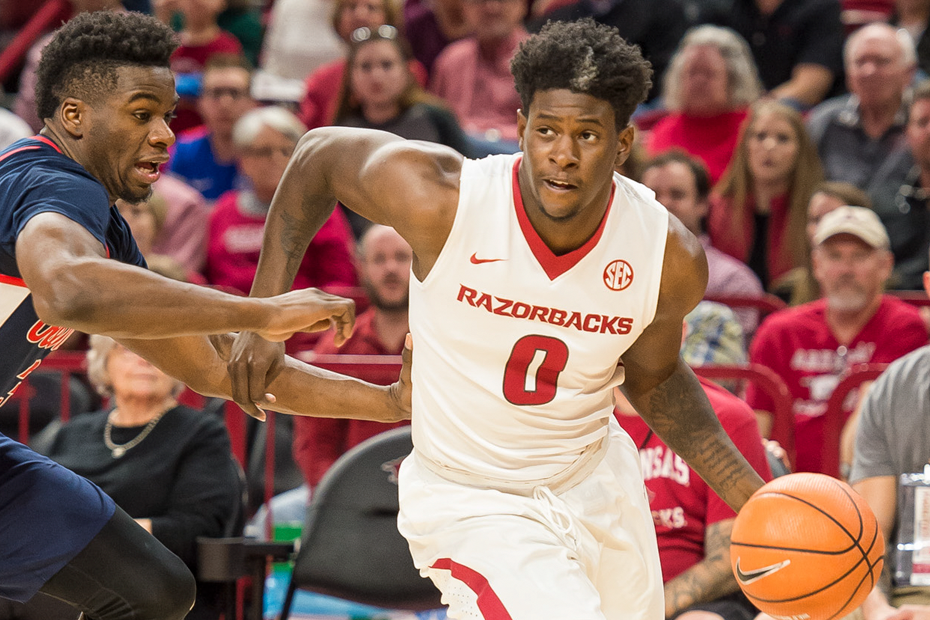 FAYETTEVILLE, Ark. – Sinking nine of its last 10 free throws with less than a minute to go, the Arkansas men’s basketball team was able to hold off the Ole Miss Rebels Saturday afternoon in Bud Walton Arena, as the Razorbacks defeated the Rebels 97-93.

With the win, the Razorbacks improve to 13-6 overall this season, holding a 3-4 mark in conference play.

After Arkansas scored the first four points of the game, things kind of settled in for both teams as the Razorbacks and Rebels were tied at 14-14 with a little over seven minutes left in the opening half. Senior guard Daryl Macon would check in the game and Arkansas’ offense would take off. Macon would score 11 straight points as part of a 21-7 run to give the Razorbacks a 35-21 lead.

A big part of that run was Arkansas ability to get to the charity stripe and make its free throws. During the 21-7 run, the Razorbacks combined to go 6-for-6 from the line and went 10-13 in the first half.

Another factor was Arkansas’ shooting, especially from behind the arc. The second-best three-point shooting team in the SEC went 8-of-13 (.615) from deep in the first half.

After scoring the last four points of the first half, Ole Miss came out of the locker room and scored six straight to cut the Arkansas lead to six early in the second half.

After trading baskets, freshman forward Daniel Gafford would go on a 5-0 run himself, including an athletic put-back dunk.

The Rebels would respond with a 6-0 run to cut it to five. From that point, senior guard Jaylen Barford would score all 16 of Arkansas’ final 36 points, giving him a team-high 23. It marked his 13th career 20-point game, ninth this season, including four in SEC play.

Up seven with less than a minute to play, Ole Miss would start putting Razorbacks on the free throw line. The Razorbacks would make nine of its 10 attempts in the final minute, as Arkansas would need them. The Rebels responded with three three-pointers in the final 38 seconds to force Arkansas the make the freebies.

As a team, Arkansas went 28-of-35 from the charity stripe, as that figured to be the difference. Both teams made 29 field goals, including 11 from behind the arc. Ole Miss would make 24-of-29 attempts at the free throw line.

Macon would go 11-of-12 from the free throw line, scoring 20 points. It is Macon’s sixth 20-point scoring game this season, ninth in his career. It marks the third time this season two Razorbacks scored 20 or more; all three times were by Macon and Barford.

Gafford finished one rebound shy of his second straight double-double, as the big man scored 15 and pulled down nine rebounds. Both Darious Hall and C.J. Jones each scored 11, as Hall went a perfect 8-for-8 from the free throw line and Jones went 3-of-5 from behind the arc.

• The win gives Arkansas double-digit wins at Bud Walton Arena for the 15th consecutive season, as Arkansas is 10-1 at home this season.

• The Razorbacks are tied for the fourth-most home wins in the country during the Mike Anderson era at 105.

• Arkansas has won 32 consecutive games in which it has led at halftime. During Mike Anderson era, the Razorbacks are 117-7 when leading at the intermission.

• During the last four seasons, Arkansas is tied for second in the SEC in league wins with 37, while Ole Miss is fourth with 34 victories.

• In games decided by four points or less, Arkansas has won 10 of the last 11.