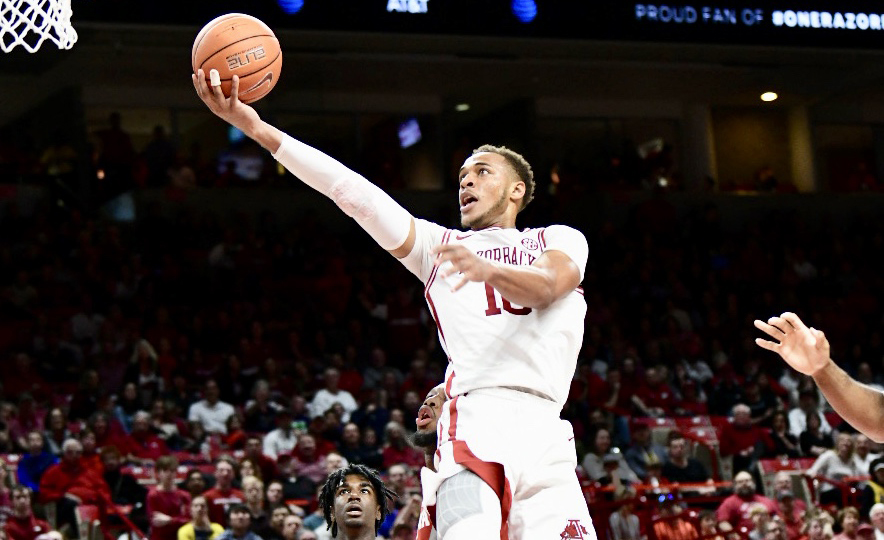 FAYETTEVILLE – Daniel Gafford, who had a double-double in the first half, became the first Razorback to have as many as 29 points and 16 rebounds in the same game versus SEC competition and led the Razorbacks to a convincing 82-70 win over Alabama in the teams’ 2018-19 regular-season finale Saturday evening at Bud Walton Arena.

With the win, Arkansas (17-14, 8-10 SEC) secures a first-round bye at next week’s SEC Tournament as the ninth seed. The Razorbacks will face #8 seed Florida on Thursday (Mar. 14) at Noon in Nashville’s Bridgestone Arena.

Gafford, who recorded his 10th double-double of the season, had a career-high 16 rebounds while his 29 points were the second-best output of his career. Gafford is also just the third player in the NCAA this season to have at least 29 points, 15 rebounds, two assists and two blocked shots in a game.

Isaiah Joe finished with 15 points, had a career-high six steals and tied a career-high with six rebounds. Joe leads the SEC in both 3-pointers made (3.4) and 3-point percentage (42.9 – 106-OF-247) and is looking to join Tennessee’s Chris Lofton in 2005 – 3.0 made per game and 46.5 percent shooting (93-OF-200) – as the only freshmen to accomplish the feat. Also, Joe’s six steals versus Alabama tied for third in the school record book for most by a Razorbacks in an SEC game (record is seven by TJ Cleveland and Todd Day).

The game was tight throughout the first half. The largest lead was five points by Arkansas when Keyshawn Embery-Simpson hit a 3-pointer with 43 seconds left. The triple put Arkansas up 36-31, which was the halftime score. Overall, the first half featured six ties and second lead changes.

Gafford led all players with 11 points and 12 rebounds at the break.

The Crimson Tide got as close as seven points (56-49) with 7:45 left. Desi Sill answered with a 3-pointer to go up 10. From that point, Gafford scored 10 straight points for Razorbacks but Alabama kept up and Arkansas led by 12 with 3:47 left.

Isaiah Joe took over from that point, hitting two free throws and making a 4-point play (3-pointer and free throw) to put the game out of reach.