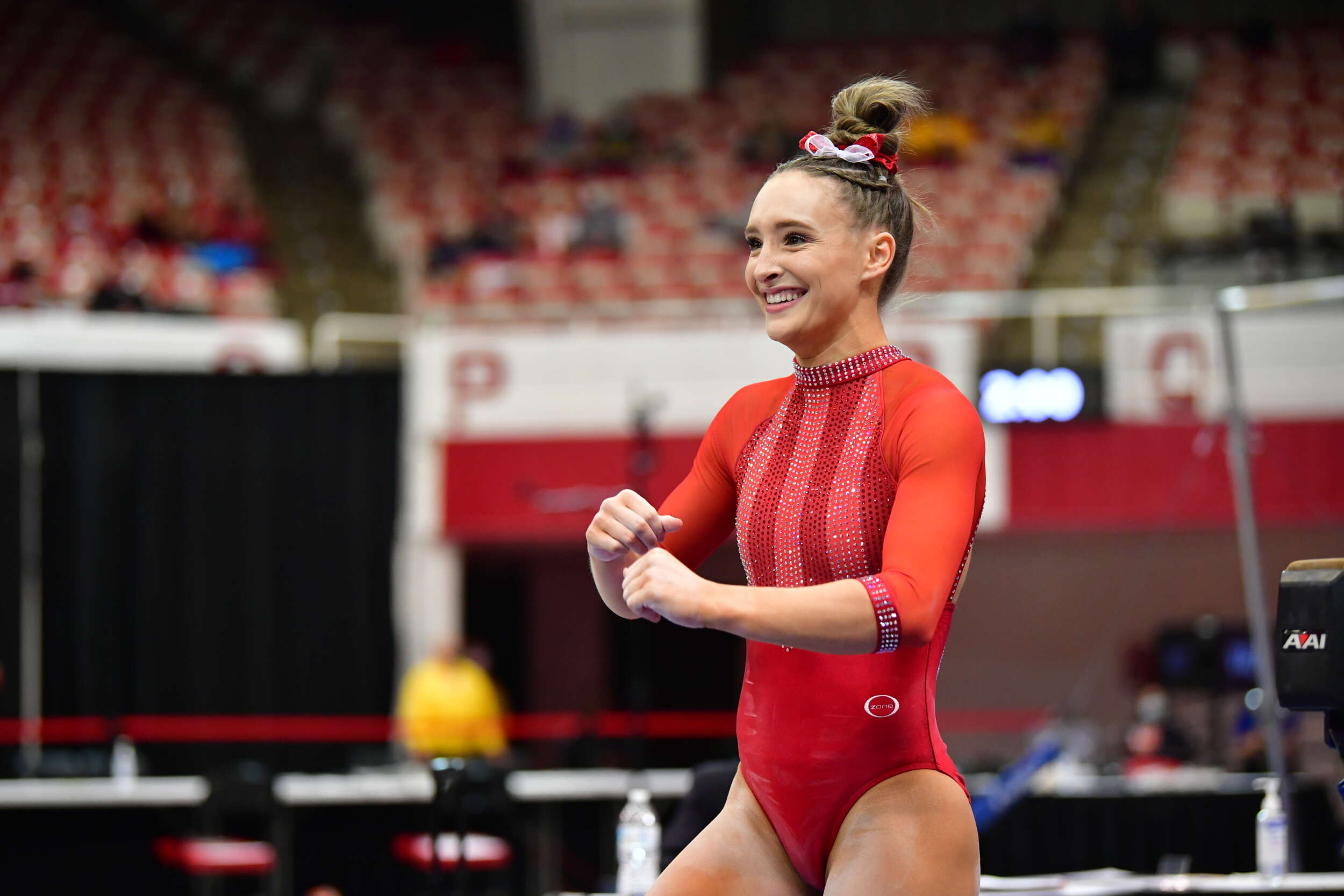 FAYETTEVILLE, Ark. –  It was a historic night in Barnhill Arena for the University of Arkansas gymnastics team. The Gymbacks scored a program-record 197.350 in their win over No. 25 Missouri (197.350-196.850). Junior Kennedy Hambrick became Arkansas’ all-time, all-around leader with an impressive final score of 39.750.

On her way to the top, Hambrick swept the event titles on the night. She began the meet tying the Arkansas record on vault with a career-high 9.975, sticking her Yurchenko 1.5 with ease. She followed with a 9.875 on bars, executing her blind-change jaeger, immediate overshoot beautifully for the judges.

In the anchor spot on beam, Hambrick set another career-high. Her back handspring layout and switch leap-switch half earned her a 9.950, matching the highest score on beam by a junior in Arkansas history and just the eighth Gymback to ever do so.

Senior Sophia Carter put on an impeccable performance for the fans in Barnhill on beam as well, sticking her side-ariel back-full dismount and scoring a 9.900 for Arkansas. Carter and Hambrick were part of a beam lineup that posted not just a season-high 49.400, but also tied for third-best team score in program history. Headed into the third rotation, Arkansas led Missouri, 147.775 to 147.450.

Arkansas shined on the floor with a season-best 49.575 team score. Their performance ranks second all-time on floor in Arkansas history. Starting with junior Abby Johnston, who can be considered the most consistent Gymback in the lineup, taking her leadoff spot very seriously with her fifth-consecutive 9.875 in the event.

Sophomore Maddie Hickey followed with a personal-best 9.900 on floor, opening her routine with a huge double pike. Redshirt senior Sarah Shaffer earned the same from the judges, sticking her double-back last pass, to put the finishing touches on her routine. Redshirt-sophomore Bailey Lovett set a new season-high on floor and tied her career-record, boasting a 9.950 and wowing the judges with her double-layout first pass.

Hambrick signed off on what would become the most prolific all-around performance in program history with a 9.950 on floor. Her first-pass double-tuck caught the attention of every fan inside Barnhill Arena, as she nailed her front handspring rudi-back layout stag jump and double pike last pass, securing her spot among the most decorated Gymbacks in Arkansas history.

The Gymbacks will close out their home slate next Friday (Feb. 26) against Alabama. Arkansas will be celebrating Women’s Empowerment and honoring its four seniors at the conclusion of the meet.