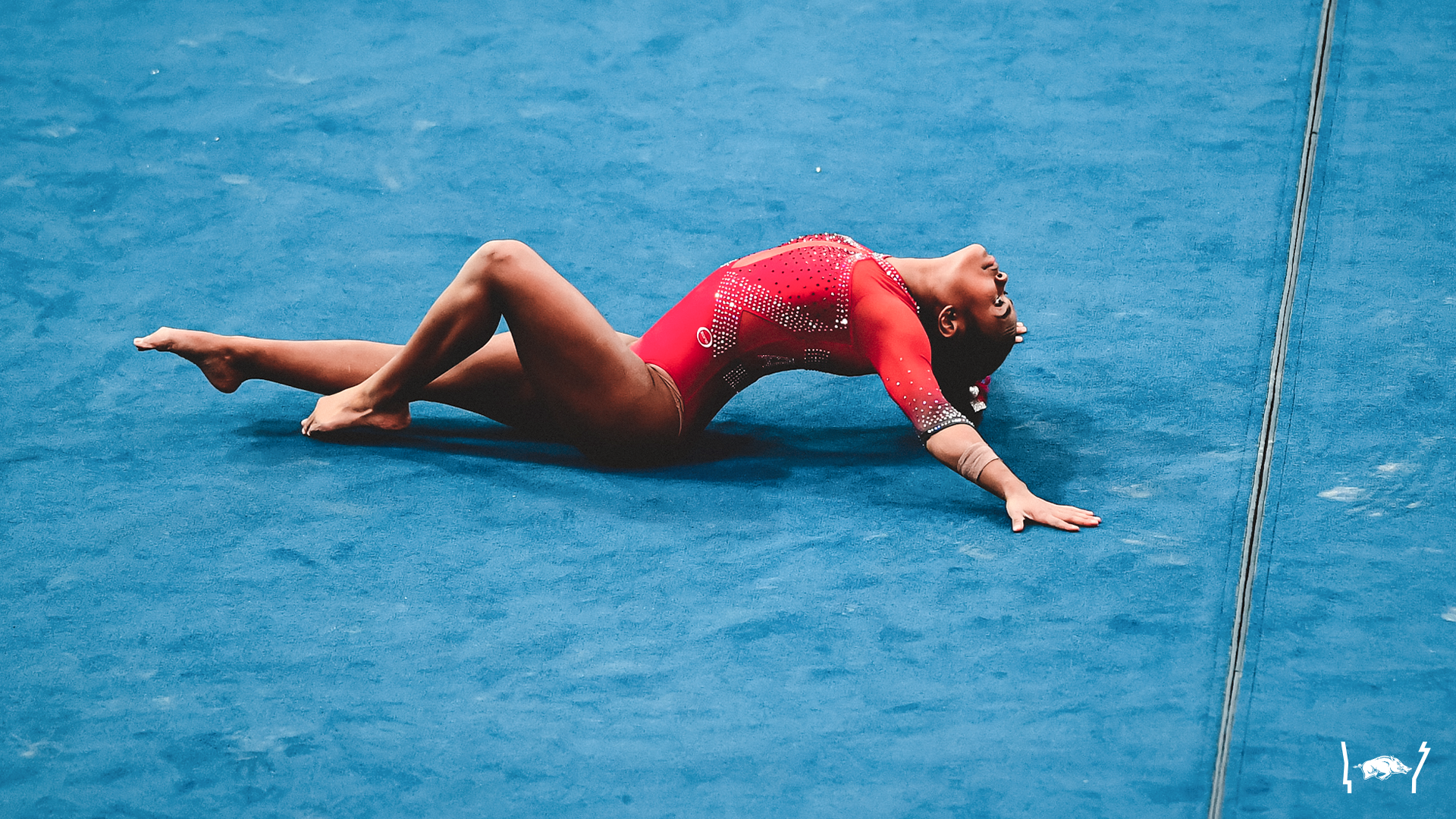 Despite a change in the schedule and a new opponent, the Gymbacks returned to Barnhill Arena on Sunday afternoon for Equality Night and came away with a big win over SEMO, 197.050-194.150.

Arkansas swept the event titles on its way to the meet win. Senior Kennedy Hambrick earned first place on vault (9.925), beam (9.975) and floor (9.950), all of which were season highs and a new career high on beam. Sixth-year Gymback Sarah Shaffer claimed the top spot on bars with a 9.925, which ties her personal best. The Hogs also took second and third on vault and floor.

It was also the first-ever Equality Night for the team, complete with a pre-meet celebration of what equality means to them and special Black History Month and Be True t-shirts, along with a weeklong campaign spotlighting community art that illustrates diversity, equity, and inclusion.

The Gymbacks started the night on vault and came out strong right away with a 9.775 for sophomore Emma Kelley in her second-ever performance. Arkansas owned all of the top five scores on vault, with Smith and fellow freshman Makie Sedlacek tying for third with a 9.850, a new career high for Sedlacek, and seniors Amanda Elswick and Kennedy Hambrick coming in at 9.900 and 9.925, respectively, which matches a personal best for Elswick. Arkansas finished its first event with a 49.300, the top score of the season for the team.

Arkansas bounced back from a tough bars rotation last week and came through for the home crowd with a score of 49.050. Shaffer led the way with a stellar routine and stuck her double layout for a 9.925, and sophomore Jensen Scalzo did the same for a 9.900 and second place. Freshmen Smith and Maddie Jones also shared fourth place with matching 9.850s.

The one-two punch of Hambrick and Elswick at the end of Arkansas’ beam lineup was lights out yet again this week. Hambrick nailed each of her series and capped it off with a stuck gainer full dismount to earn a 10 from one judge and 9.950 for a 9.975 total, a new career high and match for the best score in program history. Elswick stepped up as the anchor and hit each of her skills cleanly and easily for a 9.950, setting a new career high for the second time in as many weeks. The Gymbacks finished with a 49.150 on the event.

Arkansas closed Sunday’s meet with a bang and posted four scores above 9.900 in the floor rotation. Junior Maddie Hickey had a solid routine in the No. 2 spot that went 9.900, a new personal best. The Hogs kept the momentum from there with a routine that built as it went on for Hambrick that resulted in a 9.950, Arkansas’ top floor score this season. Sedlacek added a 9.900 immediately after, the highest mark for a rookie on floor this season. Smith then stepped up to score a career-high 9.875, and Lovett came to anchor. She stuck her signature double layout first pass and carried the energy through to the second and third for a mark of 9.925. The Hogs earned a 49.550 on floor, their best score this season, fourth-highest ever, and extended their streak of 49+ on floor to 36 meets.

Arkansas has back-to-back home meets as the Gymbacks host the No. 12 Kentucky Wildcats on Feb. 11. The meet is the third annual Women’s Empowerment Night, a tradition that begin in Wieber’s first season in 2020. Action starts at 6:45 p.m. and the meet will be streamed via SEC Network+.