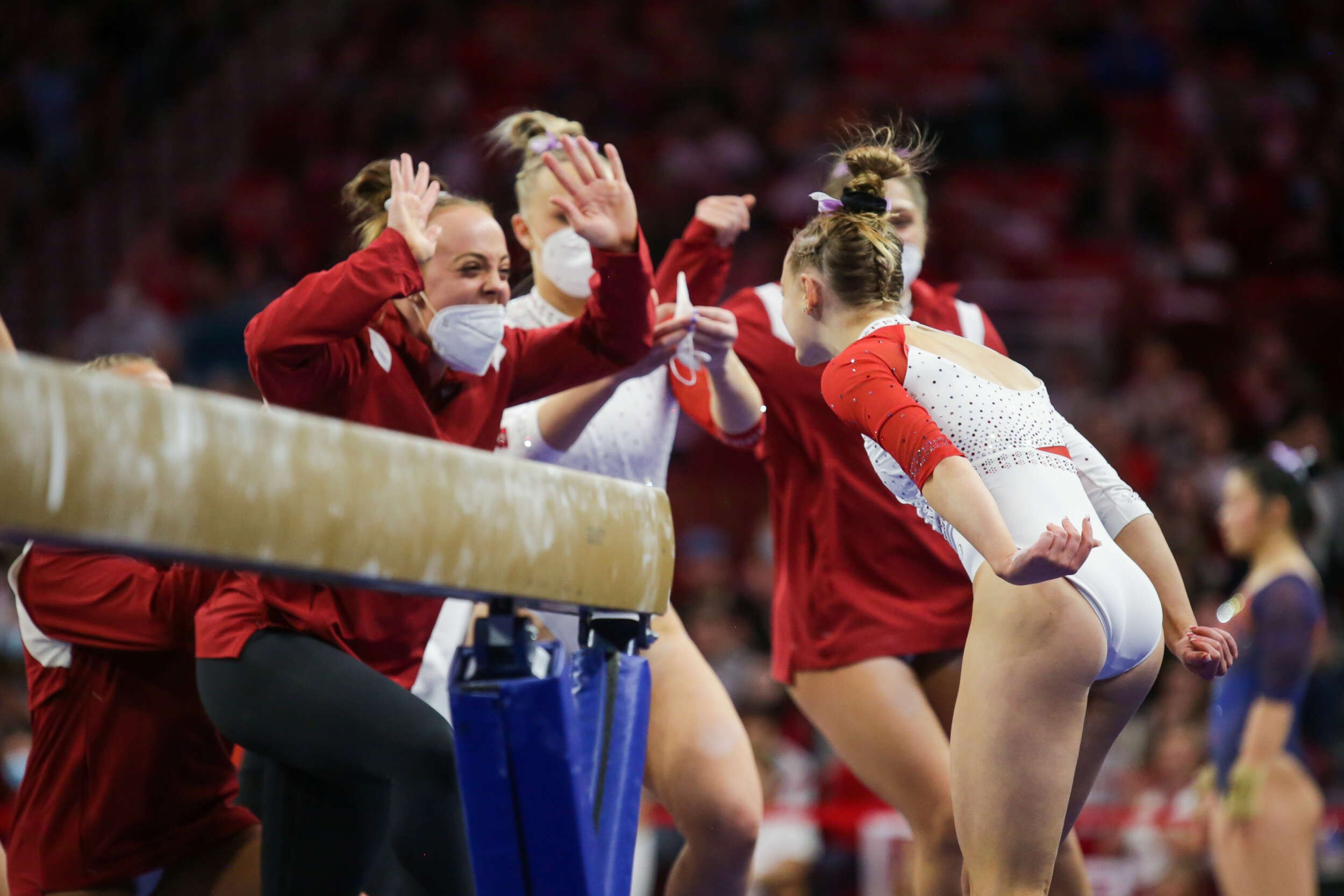 Arkansas gymnastics kicked off its road schedule with an SEC dual in Gainesville on Friday, and while the Gymbacks came up short for the meet victory, they still made some history in the process.

Florida scored 198.250, the nation’s highest of the season, to the Hogs’ 196.475 to remain undefeated on the season. Arkansas showed great resilience after a tough two first rotations on bars and vault and made a huge push in the second half of the meet.

The Razorbacks rotated to floor in the third and posted a score of 49+ for the 35th meet in a row and capped it all off with a 49.475 on beam, a new program high. The beam lineup was led by seniors Bailey Lovett, Kennedy Hambrick and Amanda Elswick, who all scored 9.925 to tie for third place and is a career high for Elswick. The Gymbacks’ previous beam record of 49.450 was nearly 10 years old, and the team posted it during 2012’s NCAA Super Six.

Arkansas had another top five finish on floor with a season-high 9.900 for Bailey Lovett, good for second place. Hambrick and freshman Leah Smith competed all-around on the night, and Hambrick took second with a 39.475 and Smith came in fourth with a score of 39.300.

The Gymbacks began the meet on bars and continued to build as the rotation wore on with a 9.800 from Smith and a 9.850 from Hambrick through the middle of the lineup. Arkansas finished the event with a 48.775.

Arkansas began its vault rotation with back-to-back 9.775 Yurchenko fulls from senior Savannah Pennese and Smith. Sixth-year Gymback Sarah Shaffer made her vault debut on the season next and put up a 9.850, which Hambrick later tied for Arkansas’ top score on the event. Freshman Makie Sedlacek also added a 9.775 from her Yurchenko one and a half and the Gymbacks posted a 49.025 on vault. Arkansas trailed Florida by 1.475 at the midway point.

The Hogs had some work to do as they headed to floor and started to hit a stride midway through the lineup. Hambrick put up a 9.850 in the third spot, and Sedlacek added another after her in her Arkansas floor debut. Smith was up next and posted a 9.825, which only left Lovett, the anchor. She delivered a rock solid routine for a season high of 9.900 and rounded out Arkansas’ floor score of 49.200.

Junior Kiara Gianfagna had the Gymbacks off to a steady start with a 9.800 in the lead-off spot on beam. Arkansas then had back-to-back season highs and scores of 9.9+ from Lovett (9.925) and Smith (9.900) to kick the momentum going. Both Hambrick and Elswick showed tremendous poise in the fifth and sixth spots, stuck their dismounts, and scored matching 9.925s to put a bow on a record beam rotation of 49.475 for the Razorbacks.

The Gymbacks return home for two consecutive meets Feb. 4 and 11 against West Virginia and Kentucky, respectively. Both meets are set for 6:45 p.m. at Barnhill Arena and will serve as Arkansas’ Equality and Women’s Empowerment Nights. They will be featured on SEC Network+.