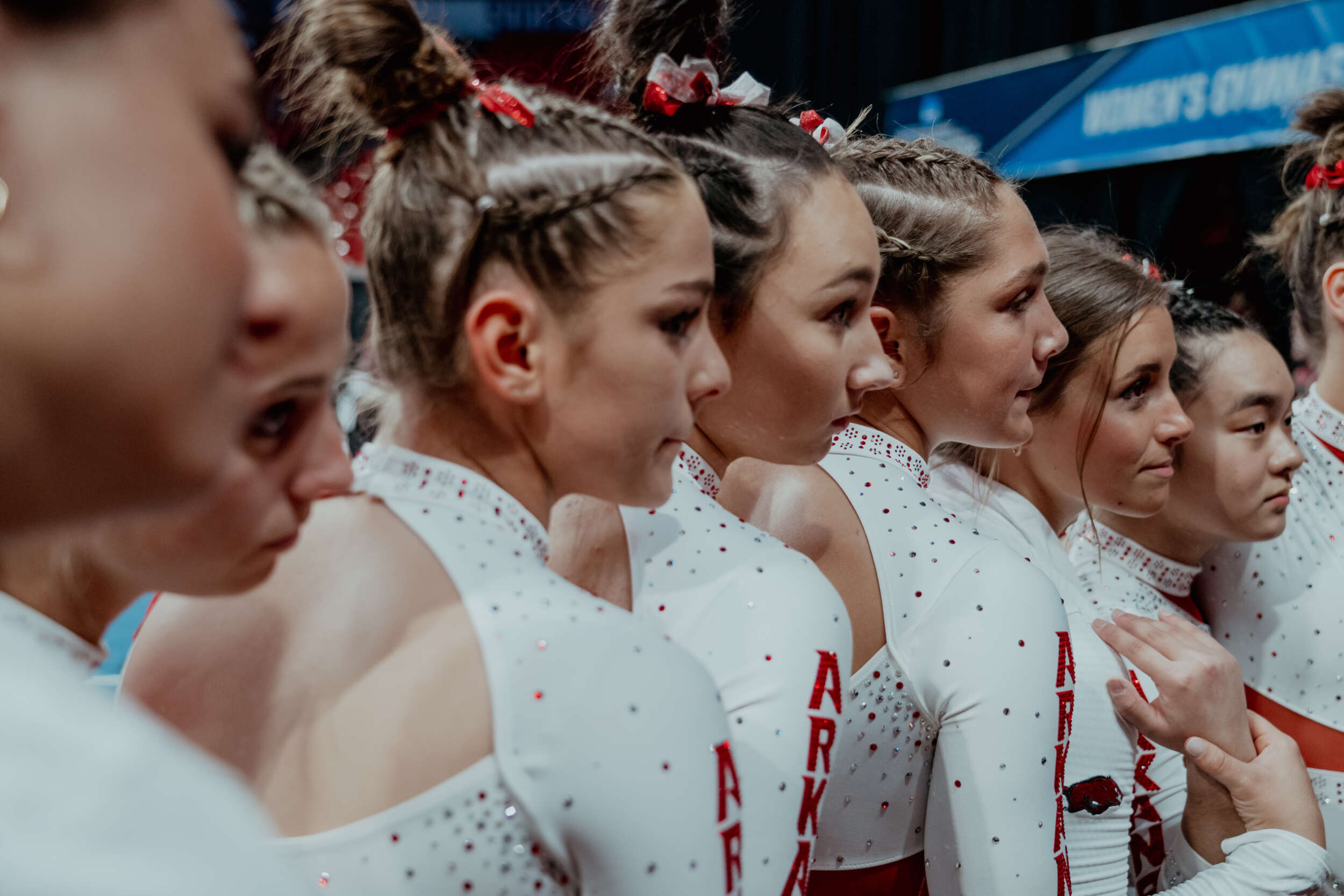 With the season on the line and aiming to break into the top two of the night, the Arkansas gymnastics team ran into a hurdle with an injury in the floor lineup. But the Hogs showed tremendous fight with a solid end to the rotation, a great vault score to finish, and came in second place in Thursday’s evening session of the second round of the Norman regional to advance to Saturday’s final.

Senior Kennedy Hambrick captured the all-around title of the session with a score 39.575, which is now the fifth-best all-around score at regionals by a Gymback, replacing her own previous record of 39.550. She took third place overall among Thursday’s all-around competitors across both sessions.

Sixth-year Gymback Sarah Shaffer had a great day with a team-high 9.950 on bars, which matches her career high and put her in a tie for second place overall on the event through the two regional semifinals. Senior Bailey Lovett had Arkansas’ top floor score of 9.925 as the anchor, and Hambrick got the Hogs’ best marks on vault (9.900) and beam (9.875).

Freshman Maddie Jones was also a highlight with scores of 9.900 in both of her routines on bars and floor, which put her in ties for fifth and eighth, respectively.

Arkansas now takes on No. 1 Oklahoma, No. 8 Minnesota and No. 9 Cal in Saturday’s regional at 5 p.m. on Saturday from Norman, as the only unseeded team to advance. The two top teams of the final will advance to NCAA Championships in Fort Worth April 14-16. The meet will be broadcast live on ESPN+ with live stats available through Oklahoma.

Arkansas got off to a hot start on bars, an event that had given the team some trouble throughout the regular season. The Hogs didn’t record any scores lower than 9.850, kicked off by sophomore Jensen Scalzo’s 9.850 in the second spot. Jones then stepped up with no sign of rookie jitters for a 9.900 score to boost the Gymbacks. Shaffer then earned a 9.950, complete with a stuck double layout dismount. Hambrick followed with a stellar routine for 9.900, and graduate student Maggie O’Hara topped it off with a 9.850 to seal the new program regional bar record of 49.450.

Arkansas headed to beam with the lead over both Arizonas in the competition and looked to push it further. Freshman Kalyxta Gamiao led the Gymbacks off with a score of 9.775 and junior Kiara Gianfagna elevated the pace with a 9.800 halfway through the lineup. Lovett executed each of her skills well for a 9.850 in the fourth spot, and Hambrick had a polished routine with clean acro and a stuck gainer full dismount for the 9.900. Senior Amanda Elswick added a 9.775 as the anchor for a 49.075 total on the event.

The Hogs needed to cover some ground in the third rotation as they fell behind to Oklahoma and Arizona. Senior Savannah Pennese, Jones and Shaffer gave Arkansas the start it needed with scores of 9.850, 9.900 and 9.800, respectively, which brought freshman Leah Smith up. Smith did a great first pass but had trouble with the landing on the second and did not finish her routine. With the pressure on, Hambrick thrived and posted an excellent routine with a score of 9.900. Lovett anchored the lineup with a 9.925, which propelled Arkansas back into second place comfortably and broke the regional floor record with a mark of 49.375.

With Smith also in Arkansas’ vault lineup, the Hogs needed the rest of the six to deliver and they did. Sophomore Emma Kelley got things started with a clean 9.750 for her Yurchenko full, and Pennese followed with a stuck landing on her full for a 9.800. Shaffer was next with a 9.800 for her stuck Yurchenko half, which brought Elswick up in the fourth spot. She posted a 9.825 with Hambrick due up. She nailed her Yurchenko 1.5 for a 9.900 with one of her cleanest landings all season. With enough solid scores to secure second place, Arkansas scratched Smith and finished with a 49.075.