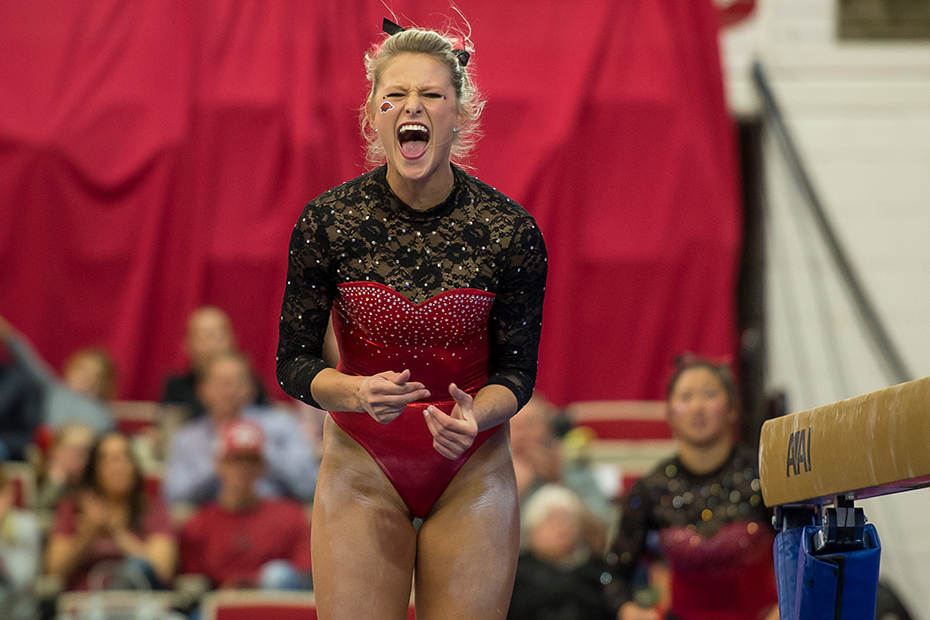 FAYETTEVILLE, Ark. — In 13 years of Arkansas gymnastics, no team scored higher in its home opener than the 2016 Razorbacks did on Friday night.

Highlighted by a 9.875 by Leah MacMoyle in her first collegiate floor routine and Amanda Wellick’s 9.900 to cap the evening, Arkansas notched a 49.275 in the final rotation. The Bulldogs wavered a bit on balance beam, but a 9.875 by Brandie Jay clinched the slim victory for Georgia.

After struggling on floor and beam in Cancun, the Razorbacks used those events to climb back into the meet. With a 49.200 on beam – led by 9.875’s from Sydnie Dillard and Paige Zaziski to lead off the rotation – Arkansas recorded the best beam rotation in a home opener in program history, as well as a tie for the sixth-best beam performance in Barnhill Arena by a Razorback squad.

Zaziski was one of three Arkansas gymnasts to post a team-high 9.875 on uneven bars, as the Razorbacks scored 49.250 in the second rotation. Braie Speed, making her Barnhill debut, and Stephani Canizaro also matched that score. The senior, Canizaro, tied her career high on bars for the fifth time.

Erin Freier posted 9.850 on both of her events, bars and beam, each mark improved from her performance in Cancun. Meanwhile, Wellick continued her tear on vault. Coming into the meet, the junior all-arounder ranked third in the country on vault and she paced the way once again for the Razorbacks with a team-high 9.850.

GYMQUOTES
“Competing at home was the most amazing feeling I’ve ever felt. I never knew I could be that happy and to have tears of joy after my bar routine and my teammates’ routines. It just made me realize how much I love gymnastics and my Hogs.” — Sophomore Braie Speed

“It was amazing to come out and compete tonight after a long season of not competing on floor. I hit my landings very well and I gave the crowd and the judges my presentation that I’ve always practiced.” — Sophomore Leah MacMoyle

“I told the girls, we haven’t competed with a heart and focus like this in probably a year or two. The tenacity we had tonight was like that of our old teams. We’re a balanced program on all four events, we just need to have them all click at the same time.” — Head coach Mark Cook

UP NEXT
It’s a quick turnaround for the #Gymbacks, as the team hosts No. 4 Oklahoma in Barnhill Arena on Sunday, Jan. 17 for a 2 p.m. matinee. The Sooners also competed on Friday night, scoring a 197.125 in a tri-meet with California and TWU.