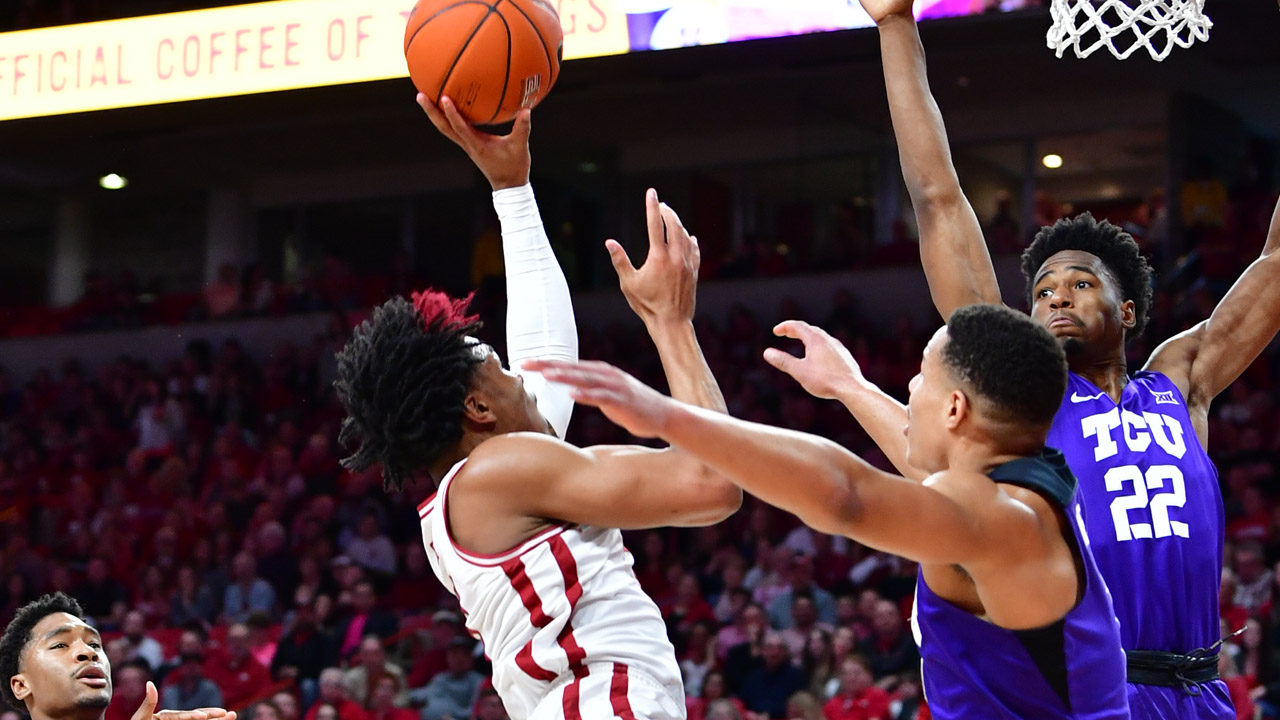 FAYETTEVILLE – Jimmy Whitt Jr., and Mason Jones each scored 20 points and Desi Sills added 18 off the bench, to lead Arkansas to a 78-67 victory over TCU Saturday afternoon before a sold-out Bud Walton Arena in the annual Big 12/SEC Challenge.

TCU jumped out to a quick 4-0 lead and Razorback head coach Eric Musselman called a timeout. Arkansas responded with an 8-2 run. TCU battled back and grabbed a one-point lead (11-10) with 14:56 remaining in the half. The teams combined to score just seven points over the next three-and-a-half minutes as the teams were tied, 14-14. Whitt got a steal and fastbreak dunk with 11 minutes left to put the Hogs up two (16-14) and Arkansas never relinquished the lead the rest of the game.

“I thought, overall, this was our best game of the year,” Musselman said.

Harris Cleans Up on the Break

Arkansas led by as many as seven in the first half but took a four-point lead into the locker room (33-29).

Jones, who only scored one point in the first half, opened the second half with a 3-pointer and Whitt had a layup to push the lead to nine. TCU worked its deficit to three twice over the next minute-and-a-half before Reggie Chaney reeled off six straight points for the Razorbacks to regain a 9-point lead (46-37 with 16:09 left).

The Horned Frogs hung around until a technical foul was called on TCU head coach Jamie Dixon. From that point, the Razorbacks turned a five-point game (51-46 with 10 minutes left) into a 15-point game (63-48 with 7:53 left) and held on for the win.

Jones scored 10 of his 20 points at the free throw line, adding five rebounds and four assists. Whitt, who played all 40 minutes for the second time this season, was 8-of-15 from the field and 4-of-4 at the line. Sills only missed one shot, going 7-of-8 from the field and 3-of-3 from 3-point range. Adrio Bailey led Arkansas with six rebounds while Jalen Harris had season-high six assists.

Arkansas stays home to host South Carolina on Wednesday (Jan. 259). Tipoff is set for 7:3 pm and the game will be telecast on SEC Network.

Sills Drives to the Hoop

Bailey with the Tough Finish