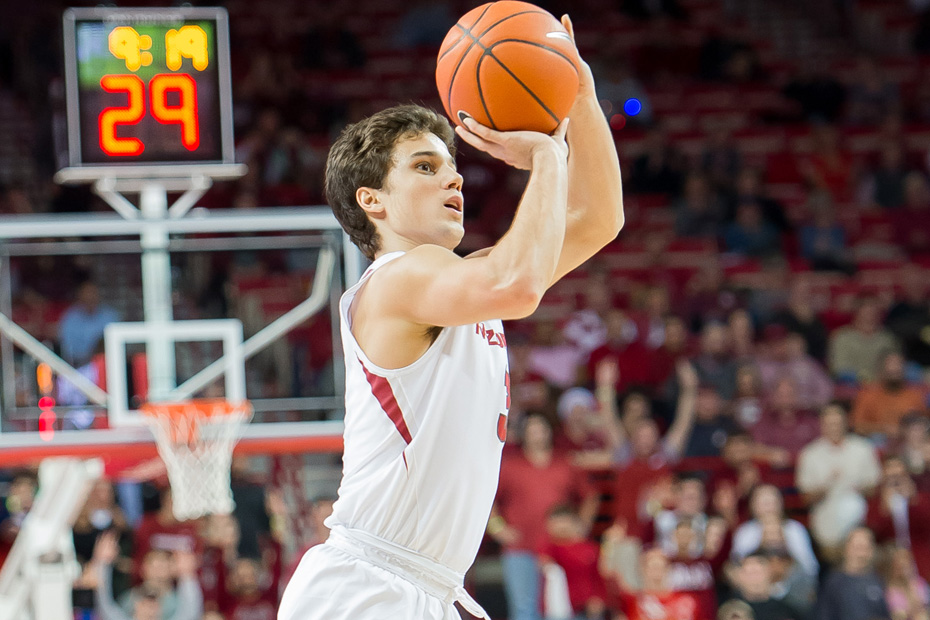 FAYETTEVILLE, Ark. — Behind a 14-3 run in the final minutes, the Arkansas men’s basketball team picked up its fourth straight victory Tuesday night, knocking off Houston 84-72 in Bud Walton Arena.

Arkansas improved to 22-17 all-time over its old Southwest Conference rival, moving to 14-2 against Houston (6-2) in Fayetteville.

The bench came up big for the Hogs once again, outscoring the Cougars 34-14, led by Dusty Hannahs who finished with a team-high 17 points. Hannahs scored 10 of his 17 in the first half, extending his streak to double figure scoring games to 15 straight contests. Dating back to last season, Hannahs has made 50 of his last 54 (.926) free throws including 20 straight over the last six games.

Down one with 14:29 left in the first half, Arkansas went on a 17-2 run to take a 25-11 lead. After missing eight straight shots, the Cougars slowly clawed back into the game and ended the first half by making nine of their last 12 attempts to head into the break leading 35-34.

Both teams traded baskets early to start the second half as Arkansas regained the lead heading into the first media timeout 45-43 and never looked back. The Razorbacks sank seven of their last 10 shots to put the game away down the stretch.

QUOTABLES
“I thought our energy level was a big factor in winning this game. I thought we had some guys in there to finish. If you noticed, Manuale Watkins had seven rebounds. He and Moses (Kingsley) were in there getting rebounds down the stretch. I thought they were fresher, moving defensively, getting to places and covering people. I thought the bench play allowed me to rest those guys, so when they came in, I thought they were fresh to finish the game and they finished it up well. It was a lot of contributions by a lot of guys.” – head coach Mike Anderson

“Our defense was the difference maker for us. We were starting to communicate, and tell our teammates when people were cutting through. Talking on defense was something we weren’t doing in the first half. Communication in the second half was much better.” – junior guard Daryl Macon

UP NEXT
The Razorbacks will complete their five-game homestand on Saturday, Dec. 10 when the North Florida Ospreys visit Bud Walton Arena. UNF has won the Atlantic Sun Conference regular season title each of the last two seasons. Tip-off is set for 4:30 p.m. on SEC Network.